Bearded dragons do all sorts of things that are unusual to us. Their bodies work in mysterious ways, which can sometimes cause their owners to have some concern about if they are okay or not. As a bearded dragon owner you may worry if your bearded dragon is breathing while he sleeps.

In this post we’ll talk more about their sleeping patterns and what happens when bearded dragons sleep. We’ll also talk about periods of extended sleep (otherwise known as the brumation period) and how to keep them happy when they go into brumation.

The Science Behind Their Sleep 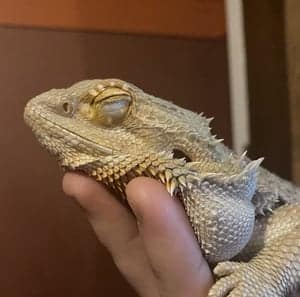 Initially thought to only be restricted to mammals and birds, a recent study in Germany reported having found evidence that bearded dragons go through the same sleep patterns as humans with alternating between REM (rapid eye movement) and SWS (slow wave sleep).

Through advanced technology of deep brain recordings and electrooculogram (EOG) recordings, the study was able to confirm an alternation between SWS and REM, which suggests similar sleep patterns to humans. Electrodes implanted in the lizards’ brain shows electrical activity that proves their sleep is made up of both SLOW (slow eye movement) and REM (rapid eye movement).

When humans sleep, we get roughly 1 to 2 hours of deep sleep per night (based on an 8 hour sleep schedule).  But since the bearded dragons sleep alternates so quickly and evenly between SWS and REM (80 seconds), that means their respiratory rate is consistently slow.

What To Expect During Brumation

Brumation is the period of time in which bearded dragons (and all sorts of other reptiles) hibernate. Hibernation is defined as “a physiological state exploited by many animals exposed to prolonged adverse environmental conditions associated with winter.”

Changes in the metabolism and cellular function occurs, which allows the bearded dragon to actually remain sleeping for such long periods of time with no physical or psychological consequences.

Are they still breathing during times of brumation? Absolutely. Just like when they are sleeping normally, during brumation their breathing may be a little hard to detect because of their slow metabolic and respiratory rate. But they are definitely still sleeping and should be disturbed as little as possible.

Typically your bearded lizard will go into brumation during the winter months as they go into brumation in the wild when it’s colder out.  You should also consider that bearded dragons originally come from Australia, which is in the southern hemisphere.

Here are some signs your bearded dragon is about to go into brumation:

Caring For Your Bearded Dragon During Brumation 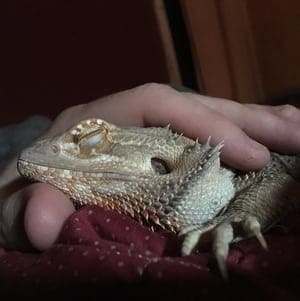 As stated, brumation is really just hibernating for cold-blooded creatures, which means that you shouldn’t bother them much. You can turn off the UVB light (since that mostly aids in digestion) and you can also give your bearded dragon a bath although this is mainly for hydration purposes.

When giving your bearded a bath during brumation, instead of multiple times a week you only have to do it about once a week. It is important that you make sure to support their head so you don’t accidentally give them pneumonia or cause them to drown since they most likely will remain asleep during their bath. You could also give them water by syringing water into their mouths.

It also may be a good idea to take away some food before they go into brumation. Sometimes if a bearded dragon goes into brumation with too much food in their belly they won’t digest it and the food can rot inside them.

This can only be treated by a vet so to err on the side of caution it’s best to take food away a couple days leading up to brumation if you know your bearded dragon is about to go into brumation.

The Dangers of Waking Them Up During Brumation

Some owners say they can wake up their lizards during brumation and their pets are okay.  We advise against this.  While the occasional bath is fine (especially since they probably won’t even wake up), be very cautious about disrupting brumation or preventing it completely.

Skipping brumation could be very harmful to their health. Brumation is a very natural, normal process that bearded dragons need and preventing this natural process from happening could be very detrimental and even shorten their lifespan.

While there is still a lot of unknown details about brumation and what this does for a reptile’s mental health and wellbeing, we all know the importance of sleep and how interrupting sleep cycles can impair brain functions and stop the release of important hormones.

Additionally, disrupting them could potentially cause your bearded dragon to stay dormant longer.

Either way, brumation is a very natural process that all bearded dragons go through. While we don’t know the mechanics of this, we know enough to see that waking or disrupting them or preventing them could have long-lasting effects. 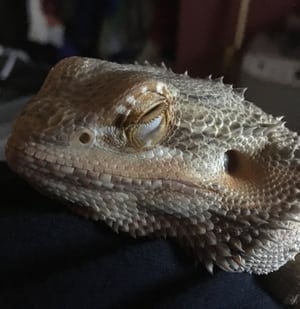 Bearded dragons sleep a lot like how humans do. We are both diurnal, meaning we both sleep at night. The amount of time a bearded dragon needs to sleep is more akin to a human teenager than adult as they need around 8 to 12 hours of solid sleep.  This amount of sleep is perfectly normal and isn’t something to be concerned about.

Sometimes you might find your bearded dragon may actually change color when they sleep! Studies have shown that they change a lighter shade at night because of their circadian rhythm (the internal process that regulates the sleep-wake cycle and repeats roughly every 24 hours).

This is totally normal and is due to their internal temperature. The study reports that dragons are darker colors in the morning, which helps them absorb more heat to achieve a proper active body temperature. Later when they need to control their body temperature during the afternoon heat their skin turns lighter and remains that way during the night.

Bearded dragons and humans share a lot of similarities when it comes to our sleep patterns. We both are diurnal and both require at least 8 hours of sleep.

That being said, because bearded dragons split their REM and SWS evenly (alternating about 80 seconds) they are in a constant state of deep sleep, which causes their respiratory rate to be consistently slow – so  slow it can be hard to tell if they are breathing at all.

While you can wake them up to check if they are breathing during normal periods of sleep, we do advise not to wake them during periods of brumation. Brumation is a crucial part to their psychological and physical health and a big part of being a bearded dragon.

Make sure to disturb them as little as possible during this process with the exception of an occasional bath for hydration purposes.