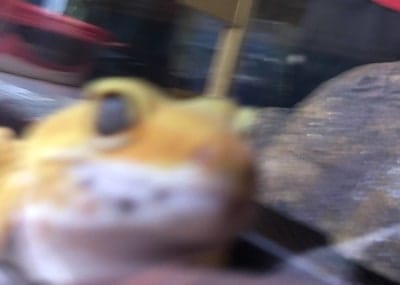 Leopard geckos are no stranger when it comes to problems with their eyes, but for many owners, it’s a mystery on whether or not they can even see in the first place.  Their eyes are big and adorable but for all some may know, they might not even work.  And because some owners aren’t 100% sure if this is true or not, I’m now going to give you the answer that you’re looking for.

Are leopard geckos blind?  Absolutely not.  In fact, leopard geckos have wonderful eyesight.  This amazing eyesight allows them to easily hunt prey in the dark and stay hidden from potential predators.

For leopard geckos that don’t live in captivity, their eyesight is one of, if not the most useful, sense that they have for ensuring that they stay alive.  Naturally, leopard geckos are not blind, but for various different reasons, they can develop issues with their sight over time.  That being said, here is some more useful information you may want to know that can help you prevent that.

The Cause and Prevention of Blindness 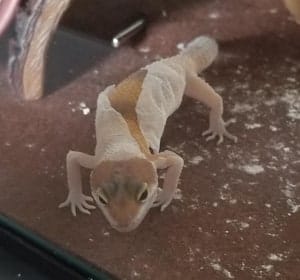 Although leopard geckos aren’t naturally blind, there are things that can happen to them that could cause them to become blind if issues arise from not being careful enough with them.  Some of these things include the following:

The good thing about all of these potential culprits though is that they can be avoided if you take the right steps in doing so.  In order to avoid eye issues, you’ll want to make sure that your enclosure is staying cleaned and maintained on a regular basis.

Fecal and urate matter accumulate into your substrate and develop tons of bacteria over time that can be very harmful to your leopard geckos eyes if they come in contact with it on a regular basis.

To make sure your enclosure doesn’t get to this point, make sure to clean it out at least once a month.  Leopard geckos are pretty good at keeping their enclosures clean on their own, but they can only keep it sanitary for so long before things start to need cleaned and replaced.

A full clean should consist of replacing all of the substrate, wiping down all of the equipment in the tank, and wiping the walls of the inside of the tank down as well.  For a good cleaner that’s guaranteed to get rid of a lot of the harmful and infection-causing bacteria, check out this stuff here over on Amazon.

As far as shedding goes, you’ll want to make sure that your moist hide is staying moist and that your enclosures humidity levels stay at around 20% to 40%.   If your tank isn’t humid enough and your moist hide isn’t very moist either, it’s very likely that your leopard gecko will have serious problems with getting their shed off.

Stuck shed can not only cause your leopard gecko to go blind when stuck around the eyes, but it can also cut the circulation off to their extremities causing discoloration and potentially even lost toes as well.

So, with that said, keep an eye on your tanks humidity and your moist hide to ensure that there aren’t any issues with any of their sheds.  Last but not least, make sure that your leopard gecko is properly supplemented with vitamins.

Vitamins play an essential role in maintaining their health, so without them, eye issues, amongst other issues, can and will likely arise.  That said, I suggest taking a look at this multivitamin here.

I give this stuff to my leopard gecko and I absolutely love it.  Calcium and D3 are very important supplements for making sure your leopard gecko stays in tip-top shape but vitamins are just as essential as well.

Because some leopard geckos who aren’t blind act like they are sometimes by being unresponsive to certain stimuli that most leopard geckos would typically react to, it’s hard to tell whether or not some of them are actually or not.

Thankfully though, there are ways and things that you can watch for and test to see if they are so that you’ll know for sure whether their eyes are, in fact, bad or not.  That said, here are a few at-home tests that can be done to validate whether they are or not:

For the first way, you’ll want to place your leopard gecko in a portable container like this one here from Amazon or wait until it’s dark outside and turn all of the lights off in the room that they’re set up in and, wait a few minutes for their eyes to adjust to the dark, and then shine light in their eyes once in a slow left-to-right motion to see if their pupils constrict or if their eyes squint.

If they do, then you’ll know for sure that they’re not blind.  Leopard geckos who are blind won’t have a reaction to this if they truly are.

Another way is to simply wave your hand slowly across their face whether that be with your hand in the tank or out of it and see if their head follows the movement of your hand.  If not, then that doesn’t necessarily mean that they’re blind, but it could be an indicator that they potentially could be.

Lastly, one more way you can check to see is to place a few crickets into their tank and see how they react to them.  Some leopard geckos are lazier hunters than others, but most of them will at least try and attempt to catch them even if they are slower at doing so.

If your leopard gecko is completely unresponsive and doesn’t seem to even notice the crickets, then there is a chance they are, in fact, blind or at the very least, partially blind.

In addition to that, if your leopard gecko is blind, you may find that they’re stumbling throughout the tank, having a hard time finding their equipment, or bumping into things that a leopard gecko with good eyesight wouldn’t. 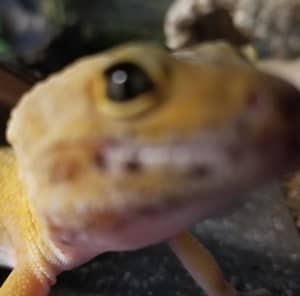 It’s unfortunate and sad whenever a leopard gecko goes blind but luckily, they’re great at adapting once they do.  They will still need help when it comes to feeding them fast-moving insects such as crickets and locusts but other than that, they learn how to live without the use of their eyes fairly quickly.

As stated above, leopard geckos have evolved into lizards that heavily rely on their eyesight and smell to hunt prey at night.  But since your leopard gecko isn’t in the wild and instead inside of an enclosure, it’s not so bad whenever they lose their eyesight while in captivity.

Luckily, leopard geckos don’t have emotions.  So even though we may be sad that they can’t see, they’re not.  No matter what happens to a leopard gecko, their only concerns will always only be to eat, sleep, and survive.

As long as they can do these three things, they could care less if they have their eyesight.  No, a leopard gecko should never get to the point where they lose their eyesight completely because it can, in fact, diminish the quality of their life to a certain degree.  But, even though this may be true, just keep in mind that they can live normal lives just like any other leopard gecko out there.

Because blind leopard geckos can tend to be a little more clumsy and slow-moving than other leopard geckos, it’s important that we stay patient with them when doing things such as feeding them as it still can be hard for them to catch their food even if they are naturally great hunters.

Unless you have an albino leopard gecko or have adopted or rescued one that was already blind when you got it then no, leopard geckos are definitely not blind by nature.  Because there are so many things that can cause them to become blind though, it’s important that we’re staying on top of things so that there’s no chance of them ever actually getting to that point.

Their quality of life isn’t lowered by a significant degree or anything, but it’s still our job as responsible and loving owners to do everything we can to prevent it from happening.

Cleaning the tank very thoroughly on a monthly basis, providing them with important vitamins needed for their bodies to properly function and making sure that they have successful sheds by providing them with adequate amounts of humidity and moisture will all be very important things to do for greatly reducing the chances of your leopard gecko ever going blind.

Having a blind leopard gecko isn’t the end of the world because most of them continue to live long and healthy lives after they’ve lost their eyesight.  But, because life for them is always easier when they have the ability to see, we should always make it a priority to do things to keep their eyes protected at all costs.