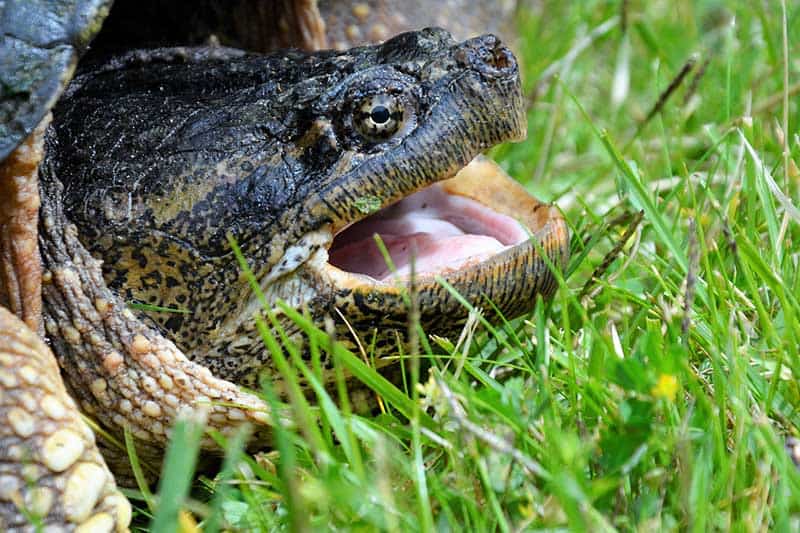 Snapping turtles look as though they just stepped out of prehistoric times, and it’s this aggressive appearance that often causes assumptions about these creatures. But are snapping turtles dangerous or just misunderstood? Let’s take a look at these interesting reptiles that can be found all over the United States, learn a bit more about their demeanor and whether or not they are dangerous.

Adult snapping turtles don’t generally move to new areas. Once they have found their home, they stay there unless their habitat is disturbed. So these animals are not roaming around trying to bite people. When humans and snapping turtles cross paths, it is typically because the human has entered into the snapping turtle’s home.

Snapping turtles don’t generally attack humans. These scary-looking creatures do not want a fight, and would much rather be left alone. If, however, you bother the turtle, whether it be accidentally or on purpose, there is a good chance that it will try to bite you. This isn’t because the snapping turtle is mean, they just felt under attack and were trying to protect themselves.

Will Snapping Turtles Bite My Dog?

Even though they are not naturally aggressive, snapping turtles do not feel as confident on land as they do in the water. This can lead them to being a little more defensive when out of their natural habitat. With that said, however, snapping turtles won’t just come out of nowhere and attack your pooch.

If your dog is curious about the turtle, the turtle could become frightened and defensive, feeling as though it is under attack. This can cause the snapping turtle to bite your dog. You can help keep your dog safe by not allowing it to get close to a snapping turtle that will fiercely defend itself when threatened.

How Badly Can A Snapping Turtle Hurt You?

Snapping turtles don’t have teeth, but they do have extremely powerful jaws that snap shut and clamp down. Snapping turtles are estimated to have a jaw strength of 226 Newtons of force. The level of force can vary, however, depending on the age and species of snapping turtle.

While there hasn’t ever been any reports of anyone dying from a snapping turtle bite, being bit by one of these reptiles is extremely painful and can even break a finger or rip off chunks of flesh.

Is It Safe To Pick Up A Snapping Turtle?

The only time you should pick up a snapping turtle, or any other turtle for that matter, is if they are in the road or in harms way. If you do have to pick up a turtle, never do so by its tail as this can cause severe injuries and even break its back. Instead, carefully grasp each side of the turtle’s shell near its back with your hands. 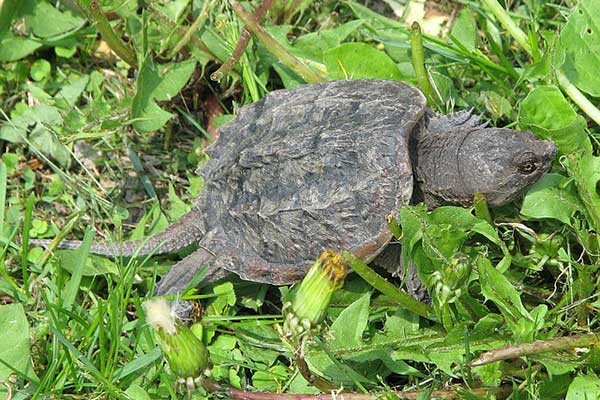 Snapping turtles can turn their heads to bite, and even scratch you with their claws. Grasping them near the back of their shell and wheel borrowing them to a safe location is the best way to protect yourself as well as the turtle. Furthermore, avoid holding the turtle too high in the air as this increases the chance of dropping and injuring the animal.

While it may be tempting to take a snapping turtle home, it’s best to leave it outdoors. Snapping turtles are wild animals and you are not equipped with the tools or knowledge to care for them properly.

Trying to tame a wild animal has shown to reduce the overall health and wellness of that animal. If you want the snapping turtle to have the best life possible, leave it alone in its natural habitat.

Is It Safe To Swim In A Pond With Snapping Turtles?

If you have ever swam in a pond, there is a good chance that you swam with snapping turtles without ever knowing it. That is because snapping turtles tend to steer clear of humans. Despite their appearance, snapping turtles are not aggressive and would much rather you leave them alone and they will leave you alone.

Snapping turtles are actually beneficial in lakes and ponds, feasting on dead and diseased fish. These creatures act as a sort of cleanup crew, helping to keep the water clean.

Turtles feel more threatened on land than they do on water. When they are in water, they will do their best to avoid you. That doesn’t mean you should go sticking your hands in underwater holes where snapping turtles could be hiding. But if you’re merely swimming in a pond, the snapping turtles should leave you alone, since they have no interest in biting or attacking you.