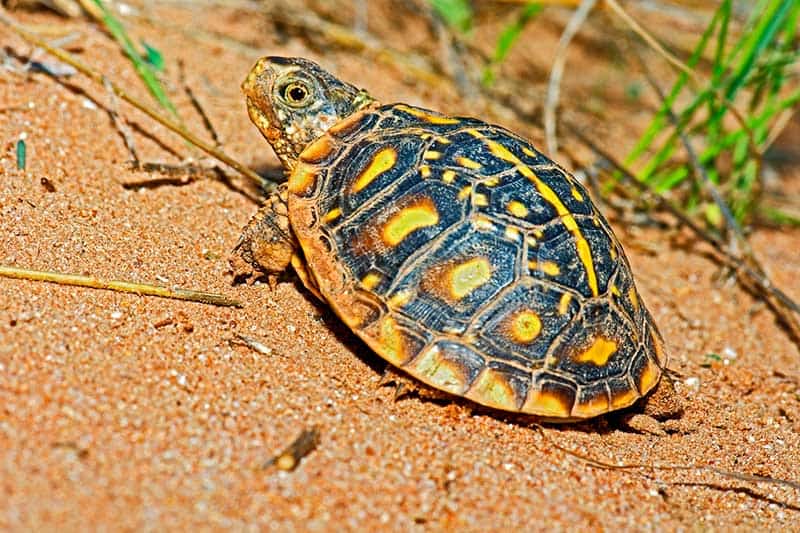 Texas is the perfect state for many types of wildlife, including a few species of box turtles, because of the geography and environment. The state of Texas has of over 250,000 square miles of land and has a variety of climates. The eastern portion of Texas actually has a subtropical humid climate, whereas much of the rest of the state is subtropical arid climate, perfect conditions for several types of turtles.

In this article, we will explore the various types of box turtles who call the Lone Star state home. Let’s take a look!

The Three-toed Box Turtle is named for its three toes on its hind feet. This turtle has a shell decorated with a variety of patterns including spots and lines. The skin is lighter than that of the Ornate Box Turtle but can feature bright colors on the scales featured on their limbs. They also have colorations on their face, specifically near their beak. To distinguish between male and females, you will find that the males have “redder” eyes and longer, thicker tails.

The Desert Box Turtle enjoys eating insects along the arid grasslands of Texas. They hibernate in the winter and thrive in the hot, humid Texas summers. However, it also needs soil to be able to dig for hibernating as well as creating a nest.

Ornate turtles are smaller sized at 4-5 inches. These small turtles are often found roaming brush-less land, though will venture to water to drink. Ornate turtles have darker shells with yellow stripes, though not as many as the Desert Box Turtle.

Like Desert Box Turtles, the Ornate will dig holes in the ground and hibernate in the winter. Even in the summer, the Ornate Turtle will burrow underground in an attempt to regulate its temperature. When it is not in a burrow, the Ornate Turtle is looking around for insects, worms, and even berries or other animals.

1. Is it legal to own a box turtle in Texas?

The laws regarding owning turtles in Texas vary based on the species. In Texas, you must have a valid Texas hunting license to collect animals from the wild. Texas does prohibit specific species from being owned in the state, such as the Alligator Snapping Turtle or Diamondback Terrapin, but not the box turtle.

Additionally, The Texas Parks and Wildlife Department limits how many turtles you can take from either private land or public land or which species. So while there are some regulations in place, it still is legal to own a box turtle.

2. Are box turtles endangered in Texas?

While box turtles are not currently on the endangered list in Texas, the state is still concerned for their future. Turtles are quickly losing their habitat due to development, including altering or rerouting water sources. Additionally, pollution and human activities near the turtle’s land and water also create livability issues for the reptile. Furthermore, as land gets more populated, the turtles face issues with road crossings and cars being a danger.

Sure, box turtles can make great pets. In fact, they are one of the most popular species of pet turtle. There are perks to them as pets such as their small size and adaptability. But that does not mean they should be kept as pets. There are many reasons why they should not be kept a pets: