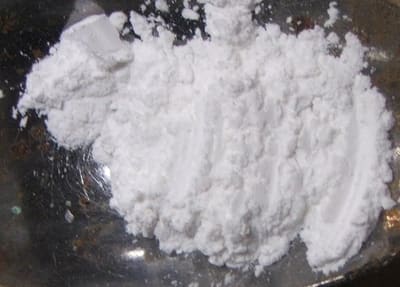 For those who don’t know, calcium is a very important supplement that leopard geckos need not only to grow but also to maintain bone health as well.  Most of the time, it is supplemented by dusting their feeders, but because some leopard geckos are picky with their insects, supplementing them this way can sometimes be quite the challenge.  Let’s see if this is a better alternative.

Can I put calcium powder in my leopard geckos water?  No.  The reason for that is because calcium is insoluble and will likely either just float to the top or sink straight down to the bottom of their water dish.  In addition to that, supplementing this way doesn’t provide them with adequate amounts of calcium for maintaining their health.

For stubborn leopard geckos, providing them with calcium this way would be awesome.  But because calcium doesn’t do too well in water, it’s not very beneficial for them and might even do more harm than good seeing as they won’t be getting what’s needed for making sure their bones are functioning properly.  That said, there are some other ways that it can be given to them.

Putting It Somewhere Else 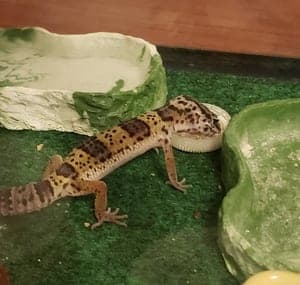 While you can’t put calcium in your leopard gecko’s water, there is another place that you can put it that will be a lot more beneficial to them and that’s in an empty cap or reptile dish so that they can lick from it whenever they feel that they need to.

Doing it this way instead of trying to put it in their water is a much better way to supplement them because not only will you not have to worry about whether or not it will dissolve, which is one of the main issues of putting it in their water, but it’ll also give them the chance to get the calcium that they need if providing it to them through dusting their feeders has proven to be a challenge for you.

If you fear that having a cap full of calcium in their tank is dangerous, then I’m here to tell you that it’s absolutely not.  Leopard geckos are extremely smart when it comes to knowing when and when not to supplement themselves with their calcium, so if you feel that they might overindulge in it, then trust me, they won’t.

Leopard gecko owners who have owned geckos for years do this and in fact, even recommend it.  The only thing you’ll want to be mindful of before placing the calcium in your tank is that there’s no D3 in it as well.

We dust our leopard geckos with D3 already, so having it in the tank will only be harmful to them simply because of the fact that it will absorb more of the calcium in their bodies than needed and as a result, might cause them to contract a pretty serious condition called metabolic bone disease because of a lack of calcium being present in their bones.

D3 is a mandatory supplement and should be given to our leopard geckos with every meal, but when it comes to putting it in the tank, it’s not safe.  With all of that said, if you’d like to know where to get a good calcium supplement for your tank, then check it out here over on Amazon.

It’s pure calcium without D3 and it’s great to have in your tank so that your leopard gecko can have access to it whenever they need it.

As for what you should actually put the calcium in, I recommend either getting a dish like the one you have for your food bowl or using a cap from an old or empty milk carton or any other carton that you’re not using anymore and placing it near their water and food dishes.

For Those with Picky Geckos

If your issue with your leopard gecko has less to do with where your calcium is within the tank and more to do with your gecko not wanting to eat dusted insects with calcium on it instead, then I may have the solution that you’re looking for.

A lot of the times, the reason this happens is because although the calcium you’re trying to feed them is good for them, they sometimes don’t want to eat it because they’re either put off by the way it tastes, smells, or sometimes even both.

The way a lot of owners find this out is because after realizing that their gecko doesn’t want to eat after their insects have been dusted, they’ll try to feed them the same exact insects undusted and will a lot of the time have success doing so.

Whenever that happens, I usually recommend owners try an all-in-one supplement like this one here from Amazon and after trying it, a lot of them have success with getting their leopard gecko’s to eat dusted insects again with no further issues.

If you have an extremely picky gecko, then you may still experience issues even after trying to introduce the new supplement to them.  But if you’re persistent with them and you keep dusting your insects every time they’re hungry, then eventually, they’ll end up breaking down and eating.

Sometimes, all it takes to get them to start eating dusted insects is to not give in to their picky behavior and instead sticking it out and reintroducing their dusted feeders to them until they simply get too hungry and just can’t take it anymore and have to eat.

Providing Them with a Variety 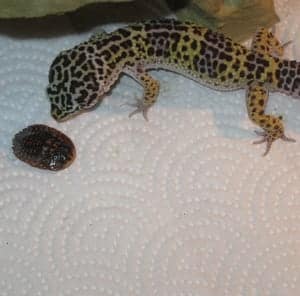 Another reason why your leopard gecko may not be wanting to eat their dusted feeders is that the insects you’re feeding them may not be appealing to them at the time.  When situations like these happen, it’s best to switch up what you’re giving them until you eventually find what they like.

This doesn’t mean that you should only stick to one type of insect because doing so provides your gecko with little to no nutritional benefit, but if that’s what it takes to get them to start eating, then starting off with something you know for a fact they like and then switching between other insects that they may have previously passed up on in the past will probably be your best bet.

That said, I recommend you go to this page here where I’ve listed all of the feeders that I give to my leopard gecko and then reading through the list and seeing which insects you’d like to try feeding them.

Please keep in mind that not all insects on that list can be given to them frequently as some of them are not the healthiest for them to eat on a regular basis and should only be given to them as snacks or in situations where they just won’t eat no matter what you’ve tried to get them to.

Because it’s likely that you’re either feeding them mealworms or crickets, I recommend you check out the dubia roaches as those are also insects that leopard geckos absolutely love to eat.  After introducing a new insect along with providing them with a different type of supplement, it’d be shocking if they didn’t end up eating again.

Yes, some leopard geckos are a lot pickier than others, but with enough experimenting and patience, even the pickiest geckos will eventually come around.

Providing them with a variety of different insects to their diet is not only beneficial for their health but it also gives you a chance to figure out what they like and what they don’t so that you can know what to feed them in times like these where they just won’t eat.

I personally believe that all leopard gecko owners should be providing their lizards with a variety of different insects but when it comes to picky geckos, then exceptions can be made.  In situations like those, it’s best just to do what works for you and your gecko.

If putting calcium in our leopard geckos water were possible, then I think a lot of people out there would be doing it.  The reason for that is because sometimes our geckos can give us problems with eating, and if they don’t eat, then they’re also not getting the proper supplementation that they need either.

Fortunately, though, with the right steps, we can eventually get them to eat.  It’ll just take a little patience, experimenting with different types of calcium and insects, and again, more patience.  Leopard geckos don’t always make it easy for us to care for them, so it’s our job to do what we can in order to ensure that they’re getting what they need to stay happy and healthy geckos.

Maybe they don’t like the insects you’re feeding them or maybe the calcium that you have isn’t appealing to them or maybe it’s both.  The only way to find out though is to try various different things and in time, figure out what the problem was as a result of doing so.

Just remember to do everything that I mentioned above and with enough patience and commitment, your leopard gecko will eventually eat their dusted insects with no hesitation.