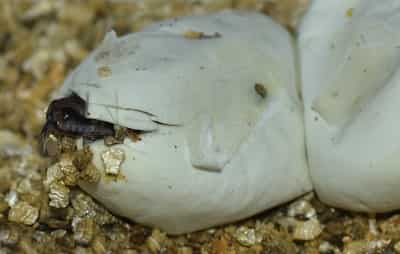 As a ball python owner, you might be excited to begin breeding your pets. You’re probably wondering exactly how often ball pythons can breed and how many eggs they can produce in one season.

Read on to find out exactly what double clutching is. You’ll also be able to learn about dystocia or egg binding in ball pythons, as well as guidelines to get through the breeding process safely and successfully.

What Is Double Clutching?

Double clutching is when a female snake becomes gravid and lays eggs twice within a single season. For ball pythons, this would be very dangerous. It takes time to regain weight and return to her normal state after laying a clutch of eggs. While it’s assumed by some ball python owners to be possible in theory, double clutching is not at all probable for this type of snake.

Dystocia, commonly referred to as “egg binding,” happens when a female ball python is unable to pass eggs. Female ball pythons can lay eggs even if there is no male around for her to breed with; they’ll simply be unfertilized and won’t produce any baby ball pythons.

Because of this, egg binding is a possibility for all female ball pythons regardless of whether they’ve bred with a male or not.

If your ball python has already laid a clutch of eggs this season but seems to be gravid again due to swelling or attempts to pass eggs, there’s a possibility that she’s actually egg bound. This is a very serious condition, so be sure to take your pet to a reptile veterinarian for expert care.

Although dystocia can be life-threatening, there’s a good chance of survival and recuperation if you catch it early on and get treatment right away. 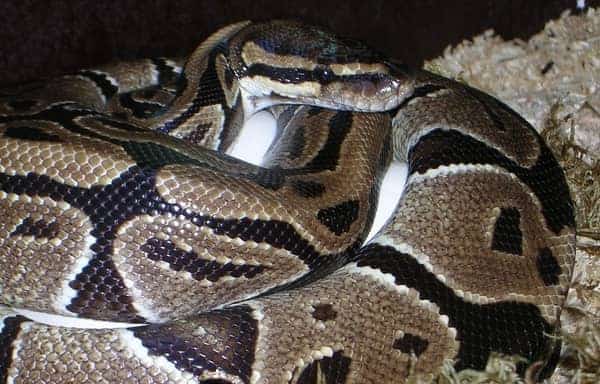 What Are the Causes of Egg Binding?

Egg binding most commonly has to do with poor husbandry. This can refer to anything from inappropriate temperatures to dehydration to lack of proper lighting. Any aspects of your ball python’s enclosure that aren’t sufficient or at the right levels can cause egg binding to occur.

Aside from issues with your pet’s environment, a poor diet or dehydration can also cause egg binding. Other factors that come into play include your ball python’s age and whether or not she’s in good physical condition.

In some cases, egg binding is a result of oversized or deformed eggs, which can be difficult to pass. In other situations, there can be an anatomical issue at hand such as an abnormality of the pelvis or injury to the reproductive tract.

What Are the Signs of Egg Binding?

The following are common symptoms experienced by ball pythons who are suffering from dystocia, or egg binding:

If you notice these symptoms, it’s essential that you get your ball python to a reptile veterinarian as soon as you can! Not only is your pet feeling a lot of discomfort and even pain, but dystocia can quickly become fatal if left untreated.

How Is Egg Binding Treated?

The first thing a veterinarian will do when you bring in your ball python is perform an abdominal exam and ultrasound, as well as take some X-rays. This will allow the vet to see exactly what is going on inside of your pet.

They will be able to confirm that your ball python is retaining eggs and may even be able to tell you why. In some cases, veterinarians will also do bloodwork to further investigate the issue.

Sometimes, the only necessary treatment is to provide a nesting site with perfect conditions–the proper temperature, humidity, and plenty of privacy. But if that doesn’t work, the vet may need to physically remove the eggs from the reproductive tract by carefully massaging and manipulating your ball python’s body.

Depending on how severe your ball python’s dystocia is, it may need to undergo surgery. In this surgery, the veterinarian will use a needle to collapse the remaining eggs and then take them out. This surgery does run the risk of damaging your ball python’s reproductive system and causing her to lose her ability to reproduce altogether.

Afterward the surgery, your pet may need to receive supportive therapy to help her recuperate. Supportive therapy can include rehydration to ensure your ball python is taking in enough liquids, as well as an assortment of vitamins and supplements. 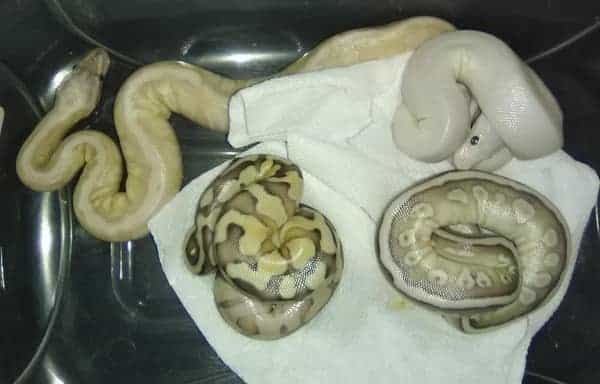 If you’re interested in breeding your ball pythons, there are some practices you should always stick to in order to prioritize the health and safety of your pets.

First, you’ll want to make sure your female ball python weighs enough to successfully carry and lay eggs. This is typically anywhere from 1500 to 2000 grams. Smaller females aren’t the right choice for breeding, as their size puts them at a disadvantage and can be dangerous. Egg binding is much more common in smaller females.

Don’t forget about your male ball pythons–they also need to be in good health before any breeding takes place. Males should be lean and weigh at least 400 grams in order to breed, although larger males are usually preferred. But weight isn’t the only important factor; body type and overall health matters too.

Lowering temperatures is a way to imitate nature; at the beginning of breeding season, temperatures fall and the ball pythons prepare to breed. While this isn’t entirely necessary, it does encourage female ball pythons to produce follicles.

Lower temperatures to about 85 degrees Fahrenheit in the basking area and keep the ambient temperature close to 80 degrees. You’ll want to drop temperatures for a period of three months, typically beginning in September (although ball pythons can breed any time of the year).

It’s important to plan out the process, rather than just putting two random ball pythons together and seeing what happens. During the three-month period of lower temperatures, place pairs together for a few days at a time, and then house them separately for the next few days. This gives them a chance to get acquainted.

Bring Temperatures Back to Normal

Get the Males Ready

In order to prepare the males for breeding, place them into an enclosure together for 20 minutes or so. You’ll notice them begin to get excited and take a vertical, more aggressive stance. This indicates that they’re ready to breed.

Keep in mind that the mating process can take awhile, even up to two full days. Any locks that only last a few hours are most likely ineffective. Make sure to let your male ball python rest for a week in between mating sessions so it can regain its potency. 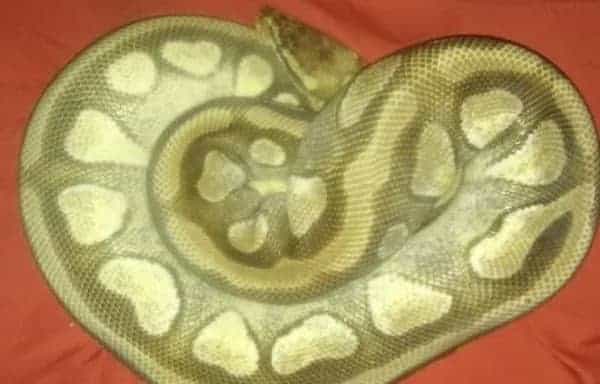 Check to See if Your Female Ball Python Is Gravid

You should be able to easily tell if your pet is gravid (pregnant) by simply looking for the eggs. In addition, a gravid female’s lower body will weigh much more than a regular female’s lower body. At this point, it’s time to put your pet into a lay box and get ready for her to lay eggs!

While double clutching is common for some snakes, there’s no record of ball pythons doing so. If your female ball python has already laid a clutch of eggs this season and appears to be gravid again, she could be suffering from a problem called dystocia, otherwise known as egg binding.

This means that there are still eggs in your pet’s reproductive system that she is unable to pass for one reason or another. Egg binding is very dangerous and can even cause death, so be sure to get your pet to the reptile veterinarian as soon as you can.

When breeding your ball pythons, it’s important to stick to some general guidelines. First off, you’ll need to make sure your pets weigh enough and are in good enough health to breed.

Next, lower temperatures for a period of three months to imitate mating season in nature. Give your ball pythons time to interact and get familiar with each other. Once the three-month period is up, get the males ready to breed and then place them with the females. If everything goes according to plan, your females should then become gravid!