Home » Snakes » Ball Pythons » Can I Feed My Ball Python a Baby Chick? 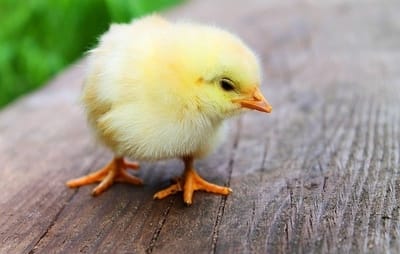 Have you been wondering about your pet ball python’s diet? Maybe you are used to feeding rats or mice, but then the thought may have occurred to you that perhaps there is something else you could try, such as a baby chick? Or perhaps your ball python is being picky and temperamental, not wanting to feed lately, so you are exploring your options of what might make a tasty and tempting morsel for your precious pet.

So, can I feed my ball python a baby chick? Baby chicks can certainly be a part of a ball python’s diet, but they are probably not adequate as a staple diet. Ball pythons tend to thrive best on rodent meat such as rats and mice, but chicks can bring in some variety and added nutrition.

Suitability of Feeding Your Ball Python a Baby Chick

Ball pythons in the wild are to some extent arboreal, slithering through the treetops in search of prey, so they would surely come across a bird’s nest from time to time and no doubt enjoy gobbling up a chick or two. This would augment the other components of their diet, namely rodents, and some ball pythons have even been known to eat fish on rare occasions.

Ball pythons in captivity, however, tend to have their preferences when it comes to what they want to eat. Generally rats and mice go down very well, and some do like eating baby chicks too. It’s all about getting to know your pet, trying different things and seeing what works well for both of you.

When it comes to suitability, baby chicks are certainly legitimate prey for ball pythons. So let us have a look at how you might go about administering them as feed.

How to Feed Your Ball Python a Baby Chick

There are basically two choices of feeding a chick to your pet ball python; either you can present it in frozen form (after thawing it) or in live form.

If you have some frozen chicks, be sure to defrost them slowly and carefully before giving them to your snake. It is usually best to thaw them overnight by transferring them from your freezer into your fridge.

The cool environment of the fridge prevents any bacterial growth from taking place while it is defrosting. Then, just before you are ready to feed, place the chick in a ziploc bag and cover the bag with warm water. This will bring the chick’s temperature up to a similar reading as that of a living animal (around 98° F / 36,6° C).

The other option is to feed a living baby chick to your ball python. If so, it is vitally important that you pay close attention and supervise the whole process. The danger of leaving a live prey unattended with your snake is that sometimes prey can and do injure the pet.

Chicks have sharp little beaks and claws which could give your ball python a nasty scratch if things got out of hand. If the chick has not been successfully eaten within 15-30 minutes, you would need to remove it from the cage and try again at a later stage, perhaps with another kind of prey or a fresh chick.

Further Tips on the Feeding Process

When it is time to feed, open the enclosure gently and quietly so as not to startle your pet. Use a set of long handled feeding tongs to grasp the prey and insert it slowly in front of the ball python.

As soon as the python strikes at the chick, release it immediately and slowly withdraw from the cage. Do not disturb or handle your ball python for a few hours before and after feeding as it needs some peace and quiet in order to feed and digest properly.

Feeding should take place inside the snake’s usual enclosure, as trying to move or handle it will cause stress and may prevent it from wanting to eat at all. Ball pythons are regarded as ambush predators. This means that their normal modus operandi is to watch and wait quietly for their prey to come along and then they suddenly strike and devour the unsuspecting victim.

Remember, your pet ball python is a nocturnal predator who naturally hunts at night. So you might like to feed it in the evening, and keep the lights dimmed, so that it feels like a night hunt. Also make sure that there is a minimum of outside noises from other people or pets.

Another thing you might like to consider is dusting the baby chick with some calcium and vitamin supplement in order to ensure your ball python gets adequate nutrients.

Whatever you do, don’t decide to give your snake a cooked chick! Snakes are predators which eat their prey raw, whether frozen or live. Even though your pet is living in captivity, it needs a lifestyle which is as close to being as natural to what they’d experience in the wild as much as possible. 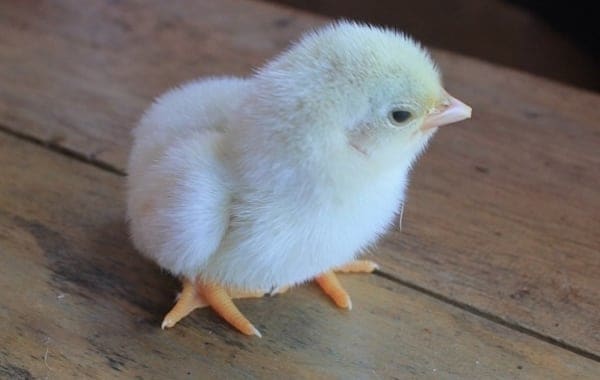 Pros and Cons of Feeding Your Ball Python a Baby Chick

As with most decisions we make in life, it is always a good idea to weigh up the pros and cons.

One of the pros or benefits of feeding baby chicks to your ball python pet would be that they are generally more economical than rats or mice. Depending where you live, chicks are often easier to obtain and at a cheaper price than rodents. Of course, you may need more and more of them, according to your python’s age and weight as it continues to grow.

Another advantage of using baby chicks as prey is that ball pythons often enjoy them and will readily feed on them. Chicks can be given either as a supplement to rats and mice, or in place of rodents.

One of the most commonly noted disadvantages of feeding baby chicks to your pet ball python is the after effects – namely when your python poops a few days later you will definitely know about it. Poultry meat can cause the stools to be extremely smelly and sometimes runny. So if you go this route, be prepared to do some serious cleaning up work afterwards.

Another con could be that baby chicks might not be able to provide your ball python with adequate nutrients. As mentioned above, this can be remedied by dusting the prey with calcium and vitamin powder. Also you may need to augment the diet with a few rodents such as rats and mice.

Comparison of Feeding Your Ball Python Chicks Versus Feeding It Rodents

If you compare the nutrients which are contained in rats and mice as opposed to those contained in baby chicks, researchers have found that rodents tend to have significantly higher levels of several important vitamins and minerals. These include Vitamins A and E, as well as calcium, and phosphorus.

It would seem that chicks have a higher fat content than rats and mice. This would possibly account for the high fat fecal matter which has a foul odor. It could also mean that the snake is not able to digest a high-fat diet too well, and therefore excretes most of it along with the insoluble vitamins.

Giving supplements is a good way of addressing a nutrient deficiency, but one needs to be careful not to overdose on calcium. There is a danger that too much calcium can have a neutralizing effect on the stomach acids of your snake which would adversely affect its ability to digest its food properly.

Phosphorus is also an important supplement which needs to be given, but only about half as much as the calcium is needed.

Some studies, on the other hand, have shown that baby chicks are pretty much on a par with rats and mice in terms of nutrition. Some breeders regard them as interchangeable, and consider feeding baby chicks or rodents as the personal choice of the pet owner, and their snake of course.

Now you know more about the option of feeding your pet ball python a baby chick. This is certainly something you might consider, either as frozen or live prey. As you weigh up the pros and cons, you would need to take into consideration the economic factors, the nutritional factors and the resultant unpleasant cage cleaning factors that inevitably result from feeding your python a baby chick.

Also compare the relevant factors involved in feeding chicks as opposed to feeding rodents. Whether you choose to go the rodent route or the baby chick route, always remember that your snake’s nutrition, health and well being is your first concern.