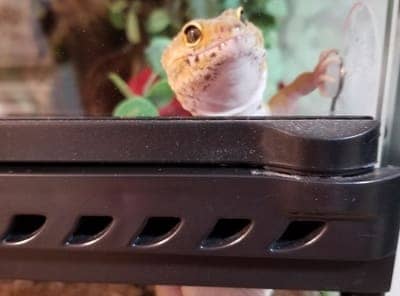 If there’s one thing that’s true about leopard geckos, it’s that they’re very curious explorers by nature.  Whether they’re squeezing their way into tight spots within the tank or trying to climb their way up the glass, nothing is off-limits when it comes to what a leopard gecko will explore.  Because they have limitations though, some things may not be explorable to them.

Can leopard geckos climb glass?  No, they can’t.  Unlike other geckos, leopard geckos don’t have sticky feet that would allow them to make their way up slippery surfaces such as glass.

While this may sound unfortunate, that’s actually a good thing.  Leopard geckos are always trying to find a way to escape their enclosures.  So if climbing on glass were a possibility for them, they’d be trying to get out all the time.  If you want to get them something that they can climb on though, I suggest reading on for more information. 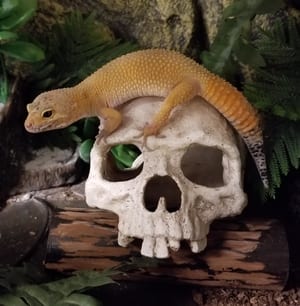 Even though not being able to climb up the glass is fortunate for us, it’s still very unfortunate for them.  Leopard geckos are pretty laid back animals, but from time to time, they want to get out and explore just as they would if they were out in the wild.

Obviously, letting them roam all over the place isn’t an option as this can be very dangerous and hard to do.  But even though they can’t climb the glass or get out of the tank, that still doesn’t mean that they can’t have a little fun.

In order to give them the tiny adventure they’re looking for, I recommend getting a few climbable decorations and placing them in the tank so that they can climb up on those instead.  These climbable decorations can include anything from rocks to hammocks and will all be great for giving them an alternative to climbing on the glass.

Here’s a cool rock den that I have in my tank that my leopard gecko climbs on, check it out on Amazon.  If you think you’d rather start with a hammock, you can check one out here.

There are other options for owners to choose from but unfortunately, there’s way too many to list.  If you’re not interested in the decorations I linked above, then I recommend just going through and finding what you think is the best for your leopard gecko.

Leopard geckos like to climb up pretty high, so if you can find them a decoration that’s tall, then that’d be ideal.  One thing you’ll want to make sure though is that the decoration you decide to get isn’t too tall as they have been known to find their way out of the tank by somehow pushing the lid open.

It doesn’t seem believable considering their size, but it has been reported by many different owners.  Not only is something like that happening dangerous because of the risk of them falling and hurting themselves, but they could also make their way into a spot in your home where you might not find them for months.

As mentioned above, leopard geckos are great explorers.  And not only because they can maneuver their way into spots that owners wouldn’t think that’d be able to get in, but because they’re surprisingly good at finding ways to escape their tank.

The reason you’ll want to do this is because if a leopard gecko feels like there’s a way that they can escape their tank, even if you don’t think there is, they’ll try for hours and even days attempting their escape until they’re either successful or until they give up.

Decorations such as thin, artificial plants may seem like they’d be too flimsy for your leopard gecko to balance on, but surprisingly, sometimes they’re not.  The reason I know that is not because I’ve had personal experiences with my leopard gecko trying to escape, but because I’ve seen other owners who have had these experiences.

That said, if you want to avoid having your gecko potentially escape, I, again, recommend not placing anything in the tank that’s overly tall even if it is thin or flimsy.  Leopard geckos don’t have sticky feet, but they do have claws that help them grip on to things that aren’t slippery.

If you have your leopard gecko on a soft substrate such as Eco Earth then there’s a good chance that nothing will happen to them if they did.  But if your gecko is housed on slate rock, stone tile, or even paper towels, then it’s very likely that could hurt themselves pretty badly.

Even though leopard geckos have been known for escaping, luckily, most of them that try to aren’t successful in doing so.  Not only because it can sometimes be hard for them to reach the top of the enclosure but also because most owners have a lid on for coverage that, fortunately for us, isn’t easy for them to push off.

Just to be extra, extra safe though, I recommend checking out these terrarium clips here.  Most lids that are available out there are pretty heavy but just so you can have peace of mind, you might want to consider placing those clips onto your tank so that you’ll know for sure it’s not coming off unless you take it off yourself.

For some people, placing clips on your tank might be extreme.  But because leopard geckos are capable of doing things that most people would never think they’d be capable of doing, I’d say that it wouldn’t hurt to add them just for that extra bit of security.

If getting to your gecko through the top of the tank is the only way you can access them, then putting on and taking off the clips can be a bit of a nuisance.  If you’re really serious about their security though, I suggest looking into getting another tank that opens up from the front instead.

Nowadays, it seems like most tanks do, but if you’re someone who doesn’t have a tank with front-facing doors, then it wouldn’t hurt to look into potentially getting one.  Here’s a reptile tank by Exo Terra that we recommend and is perfect for Leopard Geckos.

Not only will a tank like that ensure they’re security, but it’ll also cut back on inducing stress as well.  Leopard geckos tend to get startled whenever owners reach in from the top, so with the convenience of an enclosure that opens up from the front, you’ll be knocking two birds out with one stone.

If you don’t find it to be inconvenient to frequently take the clips on and off though and your leopard gecko doesn’t seem to have a problem with you reaching in from the top opposed to the front, then getting a tank like that won’t be necessary.

Just do what’s comfortable for you and your leopard gecko and that’s all that will matter.

Even though it’s true that leopard geckos can’t climb up the walls of your enclosure, that still doesn’t mean that they can’t have a little fun by climbing on something else.

According to some owners, leopard geckos can climb on and up almost anything that’s not slippery, so whenever you’re searching for what you want to place in your tank, be very mindful of how tall it is so that they don’t somehow end up making their way out of the enclosure.

Leopard geckos have shocked many owners who have found them hanging on the top of a decoration or plant that they had placed into the tank, so as mentioned above, don’t underestimate they’re climbing abilities as they may end up surprising you as well.

Keep your decorations at a somewhat lower level and if possible, secure your tank’s lid as well just to be on the safe side.  For being geckos that don’t have sticky feet like other lizards, they sure are good at making their way up to the top of the tank.  And while that’s actually kind of cool, it can be worrying at the same time.

Also, as I mentioned above, not only does having this ability allow them to find their way out of your enclosure but it also puts them at risk of falling and seriously hurting themselves if they fall on something below them that is relatively hard such as certain substrates or anything else in the tank that could hurt them.