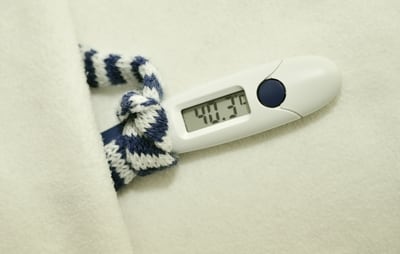 For those looking into getting a new pet, this is a very reasonable question to take into consideration and for various different reasons.  We as pet owners have the intention of holding and touching our pets because we adore them, but because they have the potential to carry different diseases and illnesses, the worry of getting sick is always there.  Let’s see what we can find out.

Can leopard geckos make you sick?  Yes, but you can’t get the common cold from them.  What they can give you is a bacteria called salmonella, which can be carried onto owners if the proper steps for sanitation aren’t being taken.

Although salmonella is something that leopard geckos carry, it isn’t something that should stop you from getting one.  Catching it can be a nuisance as you may be a little sick for a few days, but after that, it will go away.  It’s rarely ever something that requires an emergency and if you take the right actions to stay clean, chances are you’ll never catch it.  Let’s go a little deeper into the topic.

How to Avoid It 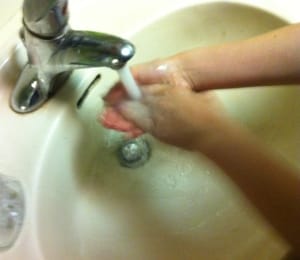 Although salmonella isn’t an overly serious strain of bacteria to catch, it should still be avoided so that it’s not spread to other people or animals that are in the house as well.  Babies and elderly people are most at risk of catching it due to their weaker immune systems and if you’re not taking the right precautions for keeping clean, you could potentially pass it on to a loved one that matches this demographic.

Avoiding it is simple and all it really requires is for you to keep clean and not doing anything that could easily cause it to spread from your leopard gecko to you or anyone else.  In order to steer clear of it, this is all you’ll need to do:

There are many things you can do to keep clean, but that’s just a few.  It’s easy to be forgetful and accidentally chew on your fingernails or eat food after handling your gecko, but by doing this, you are putting yourself at risk of catching the bacteria.

What’s even more important than your own safety is a child’s safety as well.  Because babies don’t have as many antibodies as we do for fighting off bacteria, the symptoms they display if they catch salmonella can be way more serious opposed to if someone in their late teens or 20’s were to catch it and could even require a hospital visit as a result.  So with that said, never handle your child or baby after handling your leopard gecko until you wash and sanitize your hands.

Babies are known to put their hands in their mouth frequently and could easily catch this bacteria if you’re not keeping yourself sanitized.  The same precautions go for the elderly as well.

If you’ve ever had food poisoning before, then you know how this will feel.  It’s a bad feeling to have for the first couple of days, but it will usually clear up very soon after contracting it.

Leopard geckos walk where they pee and poop, so keeping your hands nice and clean after handling them should be something all owners should be doing anyway, and that goes for all pets because almost every one can carry bacteria that could make you or anyone else in your household sick.

According to this source, the bacteria is carried within the feces of both animals and humans, so when cleaning out your leopard geckos cage for droppings, be sure to scrub your hands with hot water and soap afterward and use gloves to minimize the risk of any bacteria getting under your nails.

For a spray that I like this spray by Zoo Med Laboratories for cleaning out my tank. It’s by a company that I highly trust and the spray makes me feel good knowing that it’s lowering my chances of potentially catching the bacteria.

Gloves aren’t necessarily needed when cleaning out a tank, but I highly recommend using them considering that fecal matter or any other type of bacteria can get caught underneath your nails and may be hard to wash out if your nails are long.

How to You Know You Have It

If you ever catch salmonella, then you’ll know.  You’ll likely get sick, won’t be able to eat, have stomach cramps, and more.  But, as bad as that sounds, it is not the end of the world. According to this source here, There are over 1.2 million incidents of salmonella each and every single year, and out of these people, the large majority of them get better within the first few days or at the very most, a few weeks.

If you’re someone who is a teenager, young adult, or middle-aged person, then this is the timeframe you can expect to experience symptoms.  But, again, for those who are much younger (babies) and much older (the elderly), symptoms can last much longer and should be medically treated as soon as symptoms appear.

Other Pets That Carry It

Many people worry heavily over whether or not they should get a leopard gecko or not because of the fact that they carry salmonella, but little do they know is that many other household animals carry it as well, some of which you might even currently own.  Check out this list here to give you a better idea of what other animals carry it:

As you can see, there are WAY more animals that carry it besides leopard geckos.  Because animals like cats and dogs are more common, many people don’t care or take into consideration that they could be carrying it as well, but the fact of the matter is that they do and they can make you just as sick as a leopard gecko could if contracted.

Does that stop people from buying them?  No.  Even if more people knew they carried it, they would probably still decide to keep these two animals as pets because there are millions of people who own them who have never had any problems with catching this particular bacteria despite many of these pets being in the house for many years.

The fact of the matter is that anybody can catch salmonella from almost any pet if they’re not being clean enough, so deciding whether or not to get a leopard gecko for this reason alone shouldn’t be the main factor when deciding if you want to bring them home as pets because chances are you’ve been exposed to it already.

Leopard geckos are amazing pets to have and just like any other pet, you will have to practice good hygiene when owning them just as you would with other animals.

They Can Catch It from Us 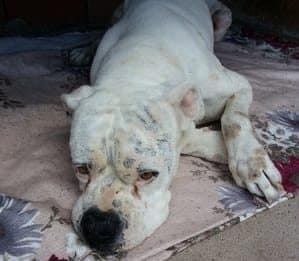 Not many diseases and illnesses can be transmitted between humans and pets, but when it comes to salmonella, it’s a different story.  We can give it to them just as they can give it to us, so making sure we’re not around them if by chance we catch it from anywhere else other than our leopard gecko is important.

Salmonella doesn’t usually affect reptiles and amphibians the way it affects us and other animals, so if you have it, be sure to stay away from your cat, dog, or any other animal you have that isn’t a reptile or amphibian.

According to this source, there are over 2,000 strains of salmonella, so what might not affect your leopard gecko might affect your cat in a totally different way.  Signs of this bacteria in other animals include the same types of signs that we as humans experience.  But, to give you a better idea, take a look at this list of what you can expect to see if we’re using cats as an example:

Each animal has their own unique strain of this bacteria, so just because one pet already has it does not mean that they still can’t get sick from a strain that was picked up from another pet.  So keep that in mind before handling other animals that you might have in the house so that you can avoid giving it to them if you ever so happen to catch it.

Salmonella is a scare that has circulated within the reptile community for a while and has even made some people shy away from buying them, but just like a lot of things on the internet, it’s not as serious as it seems.  There have been millions upon millions of reptile owners throughout the years and many of them have never caught this bacteria.

If you do catch it, the worst thing that is likely to happen is that you’ll be sick for a few days.  As long as you’re staying away from babies or elderly people, you have nothing to worry about.  The average person has an immune system strong enough to fight it off with ease and with over a million people catching it each year in the US alone, only a handful of these people have had to seek medical care.

Just remember to always wear gloves when cleaning out your leopard geckos tank, wash your hands very thoroughly with soap and water, and keep a bottle of hand sanitizer somewhere close by to help kill of most of the bacteria on your hands after holding them.

Taking these steps will not only help prevent you from catching this bacteria, but it will also help to avoid passing it along to anyone else as well.