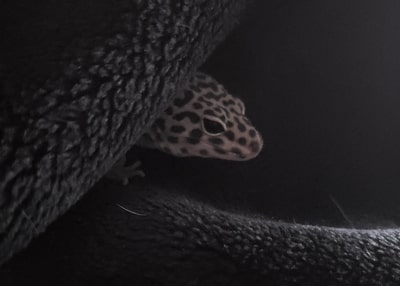 Because leopard geckos have grown and adapted to living not only in captivity but in the wild as well, maneuvering in the dark is something that they’ve had to learn to do well in order to survive.  In fact, they are crepuscular creatures, so being in the dark is actually what they prefer as it helps them hunt and stay hidden more easily.  For the answer you were looking for though, here it is.

Can leopard geckos see in the dark?  Yes, they can.  Since they are animals that are most active at night, they use this ability to hunt prey, avoid predators, and move around their enclosures easily when there is little to no light available.

Where other animals might not do too well in the dark, leopard geckos thrive.  Being able to see in the dark allows them to have the upper hand on other predators and prey that may not be able to see as well as they do and gives them comfort by having the ability to hunt more stealthily compared to animals that hunt during the daytime.  With that said, let’s learn more about them. 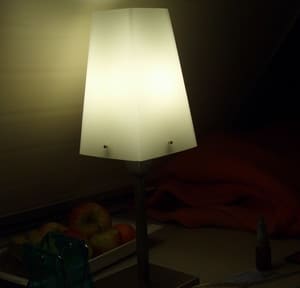 While it’s true that leopard geckos can see and move around well in poorly lit conditions, it’s important that they’re still being provided with some sort of light in order to stay true to what their natural habitat is like in the wild.

You can achieve this by either turning on a light source within the room that they’re placed in such as a lamp or ceiling light or you can do what I do if you have a sun-lit room and let the light from that create your leopard gecko’s day and night cycle.

There have been some owners who have claimed to not provide their leopard gecko with any type of light simply because of the fact that they are able to see in the dark.  But again, we as owners want to keep their environment as natural as possible to reduce stress and providing them with absolutely no light whatsoever is not natural for them at all.

If you have your leopard gecko in a room where sunlight doesn’t come in too well, then look into getting a lamp and then set a reminder on your phone or any other device that you may have for an alarm every day from around 7:00 AM when they’re asleep to around 8:00 PM when they wake up so that you know exactly when to turn it on and off.

With that said, If you’d like a good lamp recommendation, I suggest checking out this one here from Amazon.

If your room does receive light from the sun, then you’ll have nothing to worry about as nature will handle everything for you.  The light and dark play a pretty important role in letting your leopard gecko know what time of day it is, so if they’re not receiving a natural balance of both, it can cause them to stress out.

While it may be true that leopard geckos can’t see the color red emitting from red bulbs, that doesn’t necessarily mean that they can’t see the light at all.  Many owners have decided to use red light bulbs in their leopard geckos tank at night as a night light but considering they’re crepuscular, this light can be very disturbing for them and can even cause them a ton of stress.

If you’re uncomfortable sleeping in a bedroom that’s completely dark, then I recommend placing your leopard gecko’s tank into a room that is actually dark because that is preferably how it should be while they’re up and active.  Red lights may make the tank look cool and it may also serve as a cool night light for you as well, but they are not good for a leopard geckos health.

In addition to red light bulbs being used as night lights, they’re also used when owners who use heat lamps turn their lamps off and want to warm their leopard geckos tank up at night as well.

And while I usually recommend choosing whichever one you prefer when it comes to picking between a heat lamp or a heat mat for your heat source, I think having a heat mat is more beneficial for situations like these where the lights have to go off.

If you currently have a heat lamp and you’d like to avoid harming your leopard gecko by not subjecting them to harsh lights that are not only damaging but stress-inducing to them, then I recommend taking a look at this heat mat here from Amazon.

As far as providing light and heat at the same time goes, heat lamps are amazing.  But, when it comes time to turn them off at night to avoid light disturbances for your gecko, things can become a little problematic.

You can use both your heat lamp and your heat mat if you’d like for different times of the day, but if you’d rather just make things easier on yourself altogether, then using a heat mat only is definitely the way to go.

When used with a thermostat, they can be left on 24/7 and you won’t have to worry about how you’re going to provide your leopard gecko with heat when it’s time for the lights to go out.

There has been much speculation over the years on whether using a red light in a leopard geckos tank is safe or not, but because these lights have received so much backlash over the years, it’s not safe to chance placing one in your leopard gecko’s tank.

Again, if you’re worried about giving your leopard gecko heat, then get them a heat mat.  If your issue is more with just wanting a little bit of light in the room while you sleep though, then you may be able to get away with using a small night light plugged up beside your bed.

Leopard geckos generally don’t like to see any light when they’re up and moving around, but some don’t mind it and if you want to plug up a night light and see whether or not your leopard gecko is still active and acting normally while it’s on, then try it and see how they respond.

If they’re active then chances are that the light isn’t bothering them.  But, if they’re not active and are trying to hide away from the light, then they are probably stressed out and don’t enjoy it being on.

Their Eyesight Is Amazing 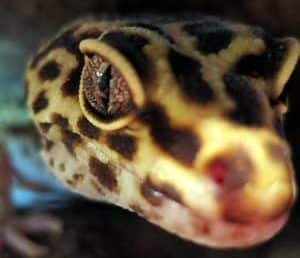 The reason why they’re able to see in the dark is simply for the fact that their eyesight is phenomenal compared to ours.

Just like cats or other animals with great eyesight, they’re able to see lights and small insects that we’re unable to pick up on and because of this, this ability gives them the edge over other creatures that can’t see as well by allowing them to survive in conditions that those other animals, including us, would have a much more difficult time surviving in.

Their amazing eyesight is not only what helps them easily move around at night within their tank when the lights are off and it’s time for us to go to bed, but it also greatly helps them survive in the more harsh conditions that they’re subjected to when out in the wild.

If you don’t want to turn your lights completely off at night in fear that they won’t be able to see, then don’t worry, they can.  It’s hard to understand that concept seeing as our eyesight is very limited compared to other animals, but surviving in conditions where there is little to no light is something that the leopard gecko has adapted to over the years.

Aside from having an awesome sense of sight though, check out this page here that I’ve put together to learn about some other cool things that leopard geckos can do.  They may be small creatures, but there are so many other cool things about them that you may or may not have known about.

It’s hard to fathom that a creature could see anything in a room where it is completely pitch black with no light, but leopard geckos see the world through a different lens than we do and oddly enough, that is exactly how they like it.

Again, if you’re worried about how you’re going to heat the tank up at night, then it’s best to either invest in a heat-emitting bulb that doesn’t produce light specifically for night time use when they’re up or get a heat mat and then let the sun provide your leopard gecko with light so that you won’t have to worry about artificial lights ever again.

Keep in mind that using the sun will not only be natural, but it will also give you peace of mind knowing that you won’t have to manually turn a light off and on every day in order to stay true to their cycle.