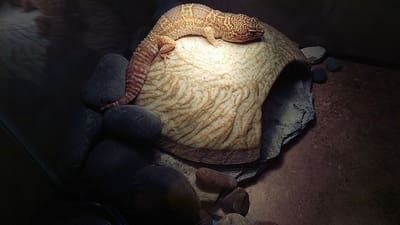 As many of you may know, leopard geckos need a form of heat within their tank for a few different reasons.  Some may say that it doesn’t matter where they get it from, but others will advise against certain sources of it.  Heat lamps, heat mats, and heat rocks are all heat sources, but unfortunately, using one of these sources isn’t advised.  With that said, let’s get right into the question.

Can leopard geckos use heat rocks?  No.  Heat rocks don’t provide enough heat for a leopard geckos needs and they’ve been known to cause skin burns on their underside due to malfunctioning and overheating as well.

With most of any leopard gecko item, there’s always a debate on whether it is safe or not.  Because there have been online reports of issues with these rocks though, I strongly advise against using them and would never recommend them for a primary source of heat because of these same reports.  With that said, read ahead to learn about much safer alternatives to these rocks. 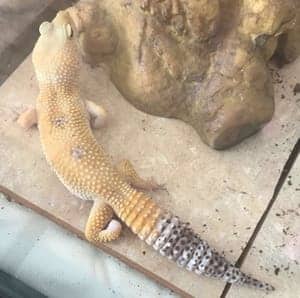 Whether you’re looking to get a heat rock for your gecko’s tank for heating purposes or decorative purposes, I suggest considering a much safer alternative instead so that you can keep your leopard gecko protected and out of harm’s way.

Many gecko owners use heat rocks to heat the tank as an alternative to heat lamps or heat mats, but if you’re looking to get one for decorative purposes only, then a rock like this one here from Amazon will be a much better and safer choice.

Not all items that have to be plugged up are dangerous for your lizard’s tank, but unfortunately, heat rocks are one of the few exceptions that aren’t very safe for them to be around.  Leopard geckos love the heat, but too much of it can be physically harmful to their health not only upon contact but indirectly as well.

Is this to say that all heat rocks will malfunction?  Definitely not.  But, there is always a chance that it could and because it’s impossible to tell whether or not the one you purchase for your tank will or not, it’s best to just not even take the risk.

Just like other popular pieces of equipment that have commonly been recommended within the reptile community, this is another one of them that does come with that risk.  You’re free to use whatever you like to use with your leopard gecko, but because of the backlash and bad reports on these particular pieces of equipment over the years, I don’t recommend taking a gamble with one around your lizard.

As stated above, many owners do in fact get heat rocks for decorative and heating purposes, but if you’re someone who is looking to get one for your leopard gecko for heating purposes only, then, again, I recommend choosing a more effective and safer alternative.

With that said, I suggest taking a look at either a heat mat or a heat lamp.  Heat rocks do provide heat, but they don’t produce enough of it to adequately provide your leopard gecko with the amount that they need in order to maintain normal bodily functions such as proper digestion and excretion, for example.

Either a heat lamp or heat mat will help you achieve this, but because I personally use a heat mat in my tank (which I absolutely love), I recommend taking a look at this mat here from Amazon.  Leopard geckos absorb most of their heat from their bellies, so in my opinion, heat mats are better.  But, if you’d like to go with a heat lamp instead for your own personal reasons, then that’s fine too.

As I’ve stated before in the past, one source of heat isn’t any better than the other when it comes to heat mats and heat lamps, it just comes down to what you prefer and what you’d like to have for your own personal setup.

So, if you’re torn between the two, just keep that in mind.  As long as you have the equipment to make sure the temperatures within your tank are staying where they should be, then both sources of heat will get the job done.

If you’re at all interested in where your tank’s temperatures should be at when having either your heat mat or heat lamp hooked up to your tank, check out this article here for a little more information on that. 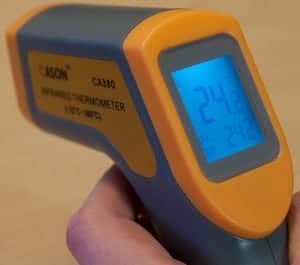 As stated above, heat rocks are known to malfunction.  So, if you do decide that you want to take your chances and put one in your tank, then at least have a way to measure your tank’s temperature so that you know that they’re in safe ranges at all times.

The last thing you want is for your heat rock to malfunction and not be aware that it’s happened.  So in order to avoid that, you’ll need to get your hands on a thermometer to give you those constant temperature readings.

Because you have a hot and cold side of the tank, you’ll need two to make sure that each side is at the correct temperature.  If you’d like to know the one I currently use, then check it out here on Amazon.

You can also use a hand-held thermometer as well, but that particular thermometer has served me well over the years and I couldn’t be happier with it.

The temperature in your tank plays a very important role in your leopard gecko’s health and that’s more than just making sure they’re warm and cool.  In addition to that, it also helps them not only digest their food as I’ve stated above, but it also helps them live as closely to what their natural habitat would be like in the wild as well.

Having a few heat rocks in the tank depending on how big it is could potentially provide your leopard gecko with the heat they need to comfortably survive, but because they come with a lot of risks, they’re not worth putting in the tank unless you have a really good eye on what the temperatures are just in case there happens to be a malfunction with them.

I don’t advise anyone to use a heat rock unless they absolutely have the time and dedication to keep an eye on the tank frequently to make sure that nothing is going wrong, but in addition to creating burns on your leopard gecko’s skin upon contact, heat rocks also have a chance in combusting in flames as well.

While sustaining burns from a heat rock is something that no leopard gecko owner wants for their lizard, having that happen is a lot safer than if the heat rock were to just completely catch on fire instead.  Luckily with enough care, leopard geckos can recover from burns to the skin with enough love and care from the owner.

But, when it comes to flame combusting in an enclosed area, the chances of a leopard gecko surviving that are very, very low and them passing in such a way would be extremely tragic as well.  I’m not saying that this is what will happen with all heat rocks, but these are all things that you should keep in mind before placing one inside of your gecko’s tank.

We love, care, and cherish our leopard geckos, so we shouldn’t be doing or placing anything in their tanks that could potentially bring them harm unless we’re keeping a VERY close eye on them frequently throughout the day, which is something that a lot of people are unable to do due to responsibilities and life demands such as school, work, and other daily activities. 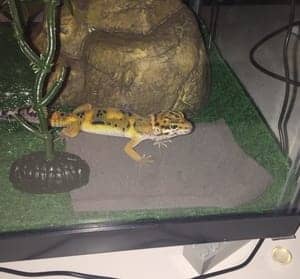 While many reptile owners have used heat rocks, many have experienced complications with them as well.  With all the backlash, I’m not sure why they’re still up for sale.  But, unfortunately, people still continue to buy them.

Leopard geckos like to climb up and lay on almost any piece of equipment that’s placed within the tank, so the chances of them getting burned by a heat rock are high and if placed into the tank, you’re taking a chance with your leopard gecko’s life because of the hazards they possess as well.

Unless you have a ton of time to watch over their enclosure and their actions each and every day, I don’t advise placing a heat rock within the tank unless it is unplugged.