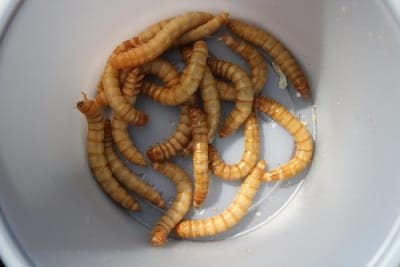 Aside from crickets, mealworms are one of, if not, the most popular staple feeders to give to your leopard gecko.  With that said, sand is also a popular substrate given to leopard geckos as well, but does that mean that it’s harmless to them when swallowed?  Absolutely not.  Since unsafe items are frequently recommended in the reptile community though, I decided to do a little research.

Can mealworms cause impaction in leopard geckos?  Yes, but only if the husbandry in their enclosure is poor.  Leopard geckos usually don’t have issues digesting most feeders given, but if the temperatures in their tank are set too low, impaction can happen due to a slow-working digestive system.

Believe it or not, but the temperatures in your tank greatly influence how your leopard gecko eats, especially whenever it’s too cold.  This is because their bodies thrive in temperatures that are warmer, so if the tank is overly cold, then impaction could happen with not only mealworms but with other feeder insects as well.  To learn more about how to prevent this, I suggest reading on. 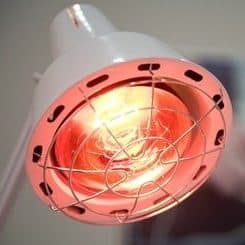 But, keep in mind that if the overall temperature of the tank is too cold, then that can be a problem for your leopard gecko and you might find that they’re unable to digest their food as easily as they should.

In order to prevent something like this from happening, you’ll need either a heat mat or heat lamp to heat up one side of your tank, a thermostat to make sure your heat sources aren’t getting too hot, and a thermometer to let you know where your temperatures are at, at all times.

The thermostat is just as important as any other piece of equipment in the tank meant to keep your leopard gecko safe and healthy, but the heat sources and thermometer are what’s going to keep your tank warm and also give you the information you need to make sure it’s not getting overly cold.

Poor husbandry is one of the main causes for why leopard geckos have trouble with their health, so without these two very important pieces of equipment, your leopard gecko could possibly be a victim of impaction to not only mealworms but to other feeders with exoskeletons as well.

I’m assuming that most people who own leopard geckos have some source of heat set up already, but if not, then I recommend checking out this heat mat here from Amazon.  It’s the one that I use in my tank and it is has been absolutely essential in keeping my lizard warm, happy, and healthy.

As for tracking your tanks warm side and cold side, these little thermometers here that I also picked up from Amazon will be just what you need to do the trick.  Keeping track of where your tank’s temperatures are at are nearly impossible without some sort of thermometer whether that be one that you just stick in the tank or one that’s handheld.

So, make sure you have these in your tank for both the cold and hot side to ensure that it’s not getting too cold on either side of the tank and therefore putting your leopard gecko at risk of impaction.

Other Feeders to Consider 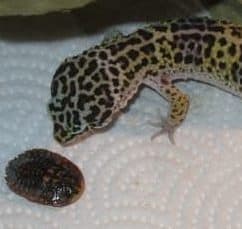 Mealworms are great feeder insects and are very popular in not only the leopard gecko community but the entire reptile community as well, but, no owner should feed them to their leopard gecko exclusively and should always mix their feeders up often to ensure their lizard is getting a good and healthy balance in their diet.

You may be wondering what exactly that has to do with impaction by mealworms, but because mealworms carry an exoskeleton and a hard substance called “chitin”, it can put your leopard gecko at risk of becoming impacted at any point during the course of their life.

In order to lower the risk of that happening, I suggest feeding your leopard gecko different feeders regularly so that not only will they have a healthier and balanced diet, but also that their digestive systems won’t be taking a beating from having to digest the exoskeletons of mealworms during each meal on a regular basis as well.

And while most of these worms should only be fed to your leopard gecko in moderation simply due to the fact that too much of any feeder isn’t good for them, they are great to have in the diet so that they’re getting more nutrition outside of what they’d get from a mealworm and their digestive systems won’t have to work as hard after each and every single meal from breaking down hard exoskeletons.

If you’d like to check out where I get all of these different feeders for my leopard gecko, then click on this link here where you’ll go to a page that I’ve put together including all of the insects that I’ve mentioned above plus some.

Aside from the strain that exoskeletons can give, only feeding one specific feeder to your leopard gecko isn’t healthy for nutritional reasons and could even lessen their lifespan due to not getting the proper nutrients that their body needs in order to operate at tip-top shape not only in the short term but even in the long term as well.

Mealworms are great feeder insects and almost every leopard gecko owner knows about them because of how cheap they usually are and how easy they are to maintain, but too many of them for long periods of time could do more harm than good and can leave your leopard gecko lacking very important nutrients that they won’t be able to get unless other insects are introduced into their diet. 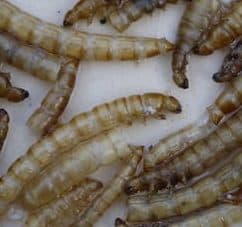 While impaction from mealworms is possible, it’s not something that happens commonly with proper husbandry and shouldn’t be anything to worry about unless the conditions of your leopard gecko’s enclosure are less than comfortable, safe, and livable.

With any leopard gecko item or food, if it’s bad for them, there will usually be a ton of stories on the internet about how bad that insect or piece of equipment is and why they shouldn’t be used.  But, when it comes to the topic of impaction from mealworms, there’s not a whole lot of information out there about this issue.

So of course, that’s a good thing and should put a lot of owners at ease who may have this uncommon issue as a concern.

But as I’ve stated before, having an all mealworm diet isn’t the healthiest and can still put your leopard gecko at risk of impaction in the long run.  Just like us, if we eat too much of one thing for long periods of time and don’t switch our diet up from time to time, we may start to feel a little crummy as a result.

So, just like we need to avoid eating certain foods over and over again for our health, leopard geckos need to as well.  In the wild, they have many different options to choose from whenever they go out on their hunt for their next meal.  So with that knowledge, that should naturally tell us that we should give them a variety in their diets while captive as well.

While mealworms are good for them in moderation, there are still many different insects out there that leopard geckos have been known to eat not only while in the tank but while out in the wild as well.  If you want to get an idea of what their diets are like in the wild, then click here to get more information on that.

Knowing what they eat in the wild can really give you an understanding of the many different insects they’re capable of eating and might even give you ideas of what you can introduce in your own leopard gecko’s diet as well.

To give their digestive system a break while fulfilling their nutritional needs, it’s always best to offer your leopard gecko many different feeders so that they’re getting what their body needs.  Leopard geckos are capable of living for up to 30 years, but if mealworms are the only thing they’re being fed, then the chances of their life being cut shorter increases immensely.

Impaction is one of the most common issues when it comes to reptiles, so if you’d like to prevent the possibility of it happening to your leopard gecko, then make sure everything on and in your tank is set up correctly and meet their nutritional needs by giving them more than just mealworms.