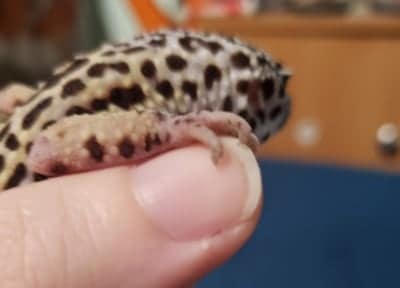 Seeing as you own a leopard gecko, you know just how uncomfortable their nails can be when placed on the skin on any part of the body.  Because of that, holding them can be quite difficult and as a result, will make some owners, like yourself, wonder whether or not their nails can be trimmed.  That said, let’s now see if trimming their nails is actually even possible or necessary.

Can you trim a leopard geckos nails?  Yes, but it shouldn’t be done.  Leopard geckos use their nails for climbing and sometimes even digging in situations that warrant them to do so.

The fact of the matter is that you can trim most animal’s nails, but whether or not it is safe or necessary is the real concern that all owners should have before doing so.  While it makes sense to trim the nails of certain commonly owned pets like cats, dogs, or even other species of lizards, there’s really no benefit to doing it to leopard geckos.  If you’d like to learn more, please read on. 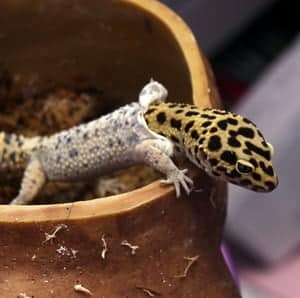 You may be having a hard time thinking of a reason why a leopard geckos nails would be beneficial to them, but actually, there are a few good reasons.  The first reason is climbing.  Yes, I already mentioned this, but let me go into a bit more detail to let you know why having nails for this reason is so important.

Well, the thing is that when owning a leopard gecko, an owner should be doing everything they possibly can to make their lizards environment as close to the environment that they would be in if they were living in their natural habitat.

Even if stress wasn’t a factor, taking away their ability to climb would affect their quality of life immensely as they wouldn’t be able to do what they’re naturally meant to do and that’s to be adventurous and curious creatures that love exploring their habitats.

Another reason why their nails can be useful is when they need to dig.  Leopard geckos dig for many reasons such as when they want to escape high tank temperatures, when feeling too exposed to their environment, and even when creating a spot within the tank, while gravid, to lay their eggs.

In fact, I even wrote a full article on it.  If you’d like to get more in-depth knowledge for each reason why they dig, then check out that article by clicking here.

If they’re unable to do these things effectively, again, it could cause them a ton of stress and if you know anything about how stress affects leopard geckos, then you know how detrimental this can be to their health and wellbeing.

That said, those two reasons alone should be enough for any owner to not want to attempt to trim their leopard geckos nails down.

An Alternative to Trimming

Although trimming their nails isn’t a good idea seeing as it does more harm than good, there still is a way you can make their nails a little duller so that they won’t be so sharp when handling them and that’s to place things within the tank that have more of a rough surface such as rock substrates and even rock decorations.

I generally recommend a loose type of substrate called Eco Earth because that is what I use with my leopard gecko, but in cases like these where an owner feels like their lizard’s nails are too sharp to even hold, I’ll recommend a different kind of substrate like slate rock or stone tiles.

These two substrates won’t trim your leopard geckos nails, but because your leopard gecko is constantly exploring their tank and climbing on everything they can possibly climb, it will make their nails a lot less sharp naturally.

That said, if you’d like to know where to get some slate rock, then I recommend this kind here from Amazon.  As for the stone tile, it’s almost like slate rock but a little thinner, so virtually, they’re the same type of substrate.  If you’re more interested in that instead of slate rock though, then it can probably be picked up at your local hardware store.

Another thing you can place in your tank that has a rough surface is rock decorations.  Not only will these specific types of decorations help with dulling their nails, but they’re also nice additions to the tank because of how good they look as well.

If you’re interested in getting one those, then check it out here.  It’s also on Amazon.  That’s the one I have in my tank and my leopard gecko absolutely loves it.  Just remember, before getting either of these two things or any other rough surface in general, keep in mind that it may take a little while before your leopard gecko’s nails actually start to become dull.

They have to walk on these surfaces before the dulling begins and seeing as they sleep throughout the day, it may take some time for that to happen.  After putting either or both of these things in your tank though, you should be able to notice their nails gradually getting duller as the days go by. 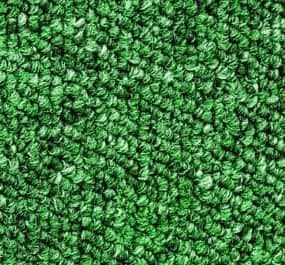 There aren’t many disadvantages to leopard geckos having their nails, but if I had to think of one, then I would say that depending on the substrate you use, they can get stuck in certain kinds and as a result, may even lose their nails due to all the tugging.

This isn’t enough of a reason to trim their nails, but it is a real concern to have if you’re someone who has a substrate where their nails can be caught in.

Luckily, I can’t think of too many substrates out there where that would be much of an issue, but if there is a substrate out there where it could happen, then reptile carpet would be that substrate.  If you have this substrate, then I would recommend getting a new type of substrate as soon as possible.

Aside from that, I cannot seem to find any more disadvantages to them having their nails.  I understand that they can be uncomfortable for some people, but it’s much better and safer to use alternative methods for just dulling their nails instead.

In addition to not really being necessary, trimming their nails can be dangerous as well and if you’re inexperienced with doing anything like that, then it’s very possible that you could potentially slip and cut one of their toes off by accident.

Leopard geckos are squirmy creatures so the likelihood of that happening is pretty high for those not experienced.  Sure, veterinarians may be able to cut their nails for you, but it’s likely that even they will tell you that doing so is unnecessary.

If the sharpness of their nails is too unbearable, then having slate rock or a decoration with a rough surface in your tank is definitely the best option for dulling their nails.

As someone who owns a leopard gecko, I understand why an owner would want to get their leopard gecko’s nails trimmed.  Because there are so many disadvantages to doing it though, I don’t think it’s a good idea to actually go through with it.

With tank items out there such as slate rock, rock decorations, and other things that have rough surfaces, making their nails less sharp is still an option even if they aren’t manually trimmed down by a vet or an owner.

Leopard geckos use their nails for various different reasons and if they’re trimmed, it could potentially affect the quality of their life in a very negative way.  While trimming them may be beneficial to us, it won’t be very beneficial to them as they might have a hard time doing a lot of the basic things that they enjoy doing such as digging and climbing as a result.

If getting slate rock or any more tank equipment isn’t an option, then wearing long sleeve shirts and gloves might also prove to be another effective way of making sure that their nails aren’t poking into your skin while handling them.