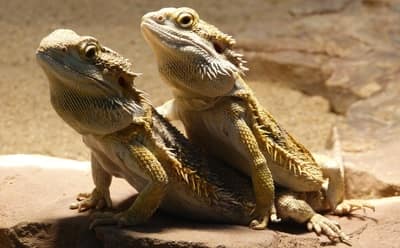 Most bearded dragon owners are sure to claim that their bearded dragon gets jealous when they are not paying attention to them. While it is comforting to assume that our pets care as much about us as we do about them, that is not the case when it comes to bearded dragons.

Though many people believe bearded dragons can feel jealousy, like most reptiles, bearded dragons are actually unable to feel this complex emotion. While they do feel a few emotions, jealousy is simply not one of them.

Understanding the Psychology of Bearded Dragons 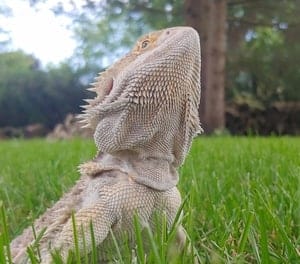 Bearded dragons are not very emotionally complex creatures. Because of this, they have a very limited emotional capacity.

Like many reptiles, bearded dragons have an underdeveloped hypothalamus. The hypothalamus is the region of the brain below the thalamus that regulates body temperature, controls hunger, thirst, and emotion.

Because their hypothalamus is underdeveloped, bearded dragons only experience some very basic emotions including: anger, fear, and pleasure. These emotions are displayed through their actions, and change in emotion is triggered primarily by their environment.

Another symptom of the bearded dragon’s underdeveloped hypothalamus is the very simple body language. The body language of a bearded dragon is very easy to read, they make sure to display their emotions clearly. They wear their heart on their sleeve and do not have any problem showing you that.

The way a bearded dragon displays both anger and fear are very similar. Some of the actions they may display are: head bobbing, hissing, flattened body, puffed out beard and black beard. If your bearded dragon is afraid, they will display these emotions in addition to possibly hiding or cowering in their enclosure.

Subsequently, the feeling of pleasure or happiness is displayed with exactly the opposite actions. If your bearded dragon is happy, he or she will not display any of the “anger” or “fear” actions, and will be much more calm and relaxed. In addition to that, they may also press up against you to steal your body heat.

Unlike the signs that they show when they’re “jealous” though, bearded dragons will only do this when they are completely comfortable and happy. Another way bearded dragons show happiness is by licking the air.

When bearded dragons lick the air, they are attempting to learn more about their environment. They often do this around food, however if they are doing this around you, it is their way of becoming more familiar with their surroundings.

Bearded dragons are also very instinctive creatures. Their most commanding instinct is their instinct to control their territory. It is very easy to confuse a bearded dragon’s territorial behavior for jealousy.

For example, if your bearded dragon sees you handling any other reptile, for example a tegu, and begins to seem agitated, it could be easy to perceive that behavior as jealousy. However, it is not.

Your bearded dragon is simply attempting to scare the other animal away from his or her territory. Bearded dragons typically do not like other reptiles and for the most part, see them as competition. They do not like any other creature being in their vicinity and see the presence of another animal as a threat to their environment.

In order to prevent your bearded dragon from feeling threatened and becoming territorial, there are a few steps you can take.

If you must store your bearded dragon in the same room as another animal though, it is best to keep your bearded dragon’s enclosure covered with a towel or blanket, while allowing proper ventilation, to make sure that animal is not within their line of sight.

If your bearded dragon does happen to display signs of territorial behavior, the situation could become fairly dangerous and hostile . So, having said that, it is imperative that all owners understand the behaviors they are exhibiting and also the steps that need to be taken for helping calm them down.

The reason for this is that bearded dragons generally do not like other animals, especially in the compounds of their own environment. Some owners may luck out and possess a beardie that doesn’t behave in this way, but keep in mind that this is something you’re likely to expect considering that most bearded dragons are naturally very territorial and possessive creatures instinctively.

That said, oftentimes, in situations like these where your bearded dragon is showing signs of aggression, the simplest way to reduce their stress is to gently stroke their head. While that might not work for everyone, I, personally, find that to be the best way to reduce my bearded dragon’s stress all while creating a bond with them at the same time.

If that doesn’t work for you though, sometimes speaking to your bearded dragon in a soft tone can also help to calm them down.

Do Bearded Dragons Feel Other Emotions, Such as Love?

Though bearded dragons do not necessarily crave affection, or have the cognitive capability to feel jealousy, that does not mean that you should neglect your pet or spend less time with him or her as it is still possible for them to become attached to the routine that you have set for them. If you have a habit of taking them out of their enclosure regularly, they may begin to become attached to that routine.

We often perceive the primitive actions of bearded dragons as affection, when really, it is just natural instinct. That does not mean, however, that they do not crave the feeling of fulfilling that instinct.

For example, it is possible for your bearded dragon to crave the feeling of sitting on your head, as they know it is a spot that radiates warmth. Additionally, we may also perceive their desire to nuzzle up to our necks as affection, when in reality, they are just seeking yet another heat source.

All of that being said, it is possible for bearded dragons to have a very basic sense of “like” for you based on your actions towards them. Here’s another example.Your bearded dragon may associate food with you, and thus form a “I get food from them so they are good” attitude.

This could lead them to have a much better attitude towards you because of that association. It is possible for your bearded dragon to form biases towards certain people and can thus form a positive bias about you, as you are the source in which their food is provided.

Because you feed your bearded dragon, they do not see you as a threat when you stick your hand in their enclosure. Likewise though, they would see someone they do not recognize as a threat simply due to the fact that that person is not their food source.

What Animals Do Feel Jealous? 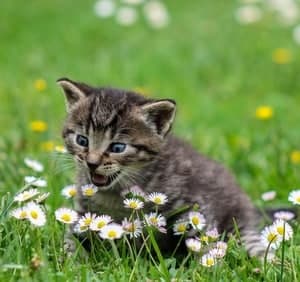 Though reptiles are not capable of feeling jealous, there are many many other animals that can feel jealousy. Much like humans, some animals begin to feel insecure and crave individual attention.

In order for an animal to feel jealousy, they must have the cognitive ability to feel complex emotions and recognize relationships. Animals that have a fully developed hypothalamus and are therefore able to feel jealous include: cats, dogs, horses, and other primates.

This feeling of jealousy can be manifested by head nudging, crowding, destructive behavior, among other things.

Some animals may also feel jealousy towards other humans. There have been instances of pets becoming jealous of newborn babies or new significant others entering the household. If this happens, be sure to watch interactions between your pet and this person very carefully to ensure things do not become violent.

In addition to that, mammals like cats and dogs, for example, can also display signs of affection unlike their reptile friends. These signs include doing things such as: holding intensive eye contact, licking, jumping, and leaning into your body to show how much they care for you. These behaviors should not turn violent and are simply their way of showing you how much you mean to them.

Although it is nice to think your pet is jealous when you aren’t paying attention to them, bearded dragons are one of the many reptiles that do not feel that attachment. Because of the natural demeanor of bearded dragons, it is possible to confuse their behavior for jealousy, however, the feeling of jealousy is much too complex of an emotion for a pet like them to experience.