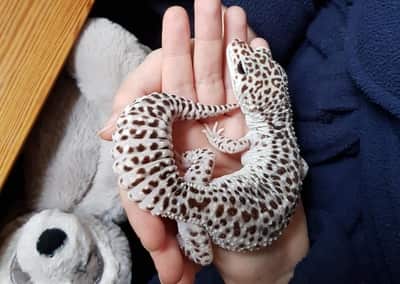 For most leopard gecko owners, this is one of those questions that come up at one point or another.  Instinctively, you would assume that they do have feelings towards us since they allow us to touch and care for them but because they are animals, that might not necessarily be true.  Because most of us would like it to be though, I’m now going to go over if it is or not.

Do leopard geckos have feelings?  Unfortunately, they don’t.  Leopard geckos can appear to have feelings whenever they’re displaying a certain behavior such as aggression, but really, this is just them acting out of instinct instead.

While this can be saddening to some, I do want you to feel comfort in knowing that what they do share with their owners is trust.  So although they can’t show feelings towards you, they can trust you enough to care and do everything else for them that they wouldn’t allow other people that they don’t trust to do.  Here’s how you can maintain that trust along with other information.

Why Instincts Get Confused for Feelings 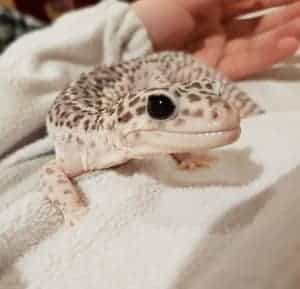 As mentioned above, because leopard geckos show certain types of behaviors that come off as feelings, it’s easy to see where the confusion would come in.  As humans, when we see them expressing aggression or when it appears they’re being loving to us, we naturally connect the behavior to an emotion.

While some animals such as dogs and cats do experience the feeling of having feelings, leopard geckos are not a species that have grown to feel the same way.  The reason for this is that in order to survive as long as they have, feelings were not what was required to get them there.

Instead, what has helped them survive so long is their instincts.  These instincts include eating, sleeping, and protecting and are basically everything that they ever needed to do in order to stay alive over the years.

For owners that may be upset over the fact that leopard geckos don’t experience feelings like us or other animals do, it might feel a little good to know that the reason they feel the way they ‘feel’ about us is because they know we’re not dangerous to them and that we’re who they can look to when it comes to meeting their needs.

They see us as beings that help them survive and because of that, they don’t feel the need to stay distant from us as they would with anyone else that comes around them.  It may seem as if that’s their way of showing their feelings towards us but in all reality, it’s just because they’ve associated our scent with a scent that isn’t a danger to them.

Because this level of trust is unique to us and sometimes even with other people within our family or friend group that they’ve gotten used to, that is what should make you proud as an owner knowing that they show this amount of trust towards you and the people you care about and likely no one else.

While it’s true that leopard geckos don’t have feelings, they do have trust.  So even though you can’t disappoint them, you can lose the only thing that they do have for you if you’re frequently participating in habits that they don’t like.  In order to avoid losing this trust, you’ll obviously want to not do things that could potentially cause you to.

While it sounds easy, for some, it can be quite difficult.  This is not only because some owners lack discipline, but because keeping trust can require forming mindful habits around your leopard gecko so that they don’t feel distrust around you whenever you’re around.

If you want to know how to keep their trust, I recommend doing the following:

If you’re a responsible and loving owner, then doing all of these things shouldn’t be a problem.  But unfortunately, there are some owners out there that aren’t very loving or responsible.  And I don’t say that to down anyone, I just say that because it’s the truth.

Trust is very important when owning any animal.  So if you don’t have that, caring for them will be extremely difficult.  Develop and keep trust between you and your leopard gecko and treat them as if they do have feelings and you and your lizard will go a long way.

It Can’t Be Used as an Excuse 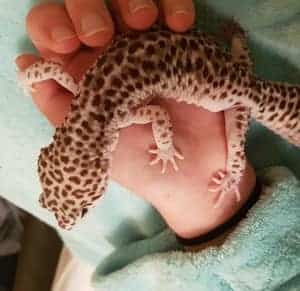 I’m not saying that anyone is mistreating their leopard gecko because from what I’ve seen, most people aren’t.  But just so everyone is staying on the safe side, be sure to respect your gecko and not do anything that you wouldn’t like others doing to you even if they don’t have the capability of feeling emotions.

At the end of the day, leopard geckos are still creatures.  So whether they’re unable to experience the same feelings that we feel or not, it’s always good practice not just an owner but as a person to treat your leopard gecko with the utmost love, care, and respect.

As mentioned above, leopard geckos do know when and when not to trust a person because of the actions that a person displays around them.  So although they may not ever feel anger or resentment towards others, that shouldn’t give any owner the excuse to treat their leopard gecko any kind of way that they want.

If they’re mistreated, they won’t hold a grudge against you like a person would, but they can start to act hostile and aggressive around you if they associate you with someone who doesn’t make them feel good.

The reptile community is awesome and as mentioned above, most owners are amazing.  Because they’re some bad apples out there though, it’s good to show a little tough love to those who you feel aren’t treating their leopard gecko the way that they should be treated.

If you personally know anyone who could be treating their gecko a little bit better, don’t hesitate to let them know that leopard geckos do remember those who treat them poorly despite not having any feelings or emotions.

Some may think that because leopard geckos don’t feel anything that they don’t enjoy interacting or having fun with their owners but in all actuality, they do.  Ways you can interact with them can include taking them outside for a little bit, allowing them to roam around in a bigger but confined space, or just by simply holding them.

Not only will they appreciate it, but it’ll help build and maintain the trust they have for you as well.  For the ultimate amount of interaction, the best thing you could probably do for them is to allow them to run around in a space that’s much larger than their tank.

They don’t dislike being in their tank as this is a place where they get to eat, sleep, and hide in without the threat of potential predators attacking them like they would out in the wild, but they do enjoy being out in really open spaces from time to time as this gives them the chance to really stretch out and explore more than what they’re used to being around.

If this is something you may be interested in allowing your gecko to do, then you can either let them roam around in the bathtub since it’s fairly large and inescapable or you can set them in a large playpen like this one here from Amazon.

That’s the exact playpen I use with my leopard gecko and I absolutely love it.  There isn’t a cover over the top of it so there is always the risk of other animals jumping into it and attacking your leopard gecko if they’re not put up or if you’re not watching them but the good thing is that there are no gaps at the bottom that would allow them to escape if they ever wanted to. 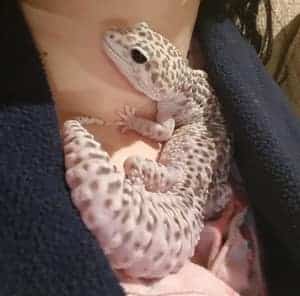 As sweet and loving as leopard geckos are, it’s easy to see why most owners think that they’re animals that share the same feelings as other commonly owned pets such as dogs and cats.  But because they have such a small, primitive brain, the only thing they’re focused on is surviving.

Leopard geckos can show trust and distrust towards people but you won’t ever see them express happiness or sadness simply for the fact that they’re unable to.  Some may think that aggression is a sign of anger, but really, it’s just a state that they enter when acting purely on instinct.

There are owners out there that don’t enjoy entertaining the thought that their leopard gecko doesn’t have emotions, but even though it may be a little hard to accept, it is, unfortunately, how leopard geckos have evolved over the years.

Just continue loving and caring for them and if they could, they’d be more than happy to show you that they loved you back.