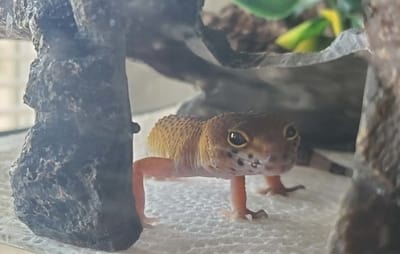 You might not have known this, but leopard geckos can be very territorial creatures.  They will fight, harass, and even injure other leopard geckos to show that they’re the head honcho of their area and that nobody else can claim that title.  And although they’re great at being physical and confrontational, I wonder if there’s anything else they do to claim an area they want.  Let’s find out.

Marking their territory may just seem like a cute gesture that they do because it consists of wiggling their butt in the air while they rub the waxy substance on their stomach onto the surface below them, but a lot of the times they’re really just leaving their scent to let any females in the area know that they are available and ready to make some leopard gecko babies.  Let’s learn more. 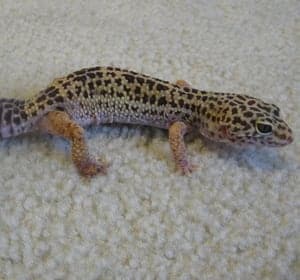 Female leopard geckos reach sexual maturity between around 8 to 12 months after hatching from their egg, but male leopard geckos will reach it at about 6 months after hatching.  This means that if you have both a male and female gecko living together, the male will be ready to mate a lot sooner than the female will be and might even annoy her from all the attempts to try and do so.

But, if they are both sexually mature, then your male leopard gecko will do what’s stated above and start marking his scent or “territory” all over the tank to let the female know what type of mood he is in.

If you don’t plan on breeding your leopard geckos, then I recommend putting them in separate tanks.  If your male leopard gecko starts displaying this behavior and your female is in her period of ovulation, then she will definitely get pregnant and you can expect to have some babies on your hands very soon.

While this is awesome for breeders, people who only plan to care for one or two geckos prefer not to deal with this because of the amount of extra responsibility, equipment, and maintenance it takes to uphold these multiple different geckos.

If your leopard gecko is in ovulation season which usually occurs between January and July and you don’t want to breed, then I suggest having an additional tank to separate the two leopard geckos until the ovulation period is over.

Because sexually mature leopard geckos are at least 6 months old, you will need a tank that’s at least 20 gallons or larger so that they can comfortably live and move around their environment with no problems.  I say that because I would hate for you to accidentally put one of your leopard geckos in a tank smaller than what they should be in as this can not only cause a lot of discomfort but a lot of stress as well.

For those who actually plan on breeding their leopard geckos, 20 gallons is a great size to have both a male and a female together in order to get that done.  Generally, only one leopard gecko should be in a tank this size, but because you’ll be trying to get them to mate, you’ll want them as close as possible, but only until they’re done mating.

That’s because the rule is to have a tank that’s 5 to 10 gallons larger in addition to the minimum 20 gallons they should be in for each leopard gecko once they’re past 2 months old.

Females Do It, Too

Also, when a male is rubbing his stomach on the ground, a lot of the times it does mean that they are ready to mate, but it can be them just spreading and familiarizing themselves with their territory as well.

The time you will most likely notice this type of behavior is when your leopard gecko is put into a new environment.  So, when bringing them home for the first time, you might just catch them walking around the whole tank and plopping down in various different spots so that they can rub their stomachs on the ground to let other creatures know that the area is theirs, even if they are the only animal in the tank.

The only difference when it comes to this behavior though is that while male leopard geckos will secrete wax from their pores when they want to mate, females won’t.  They both have pores on their underside that shape into a ‘V’, but when it comes to a female, the pores are usually a lot less prominent and their not used to create a substance for mating.

Sometimes it can be hard to tell whether a leopard gecko is trying to mate or not as they display the same type of behavior when it comes to familiarizing themselves with their environment and when wanting to mate, but a good indicator to look for is any waxy substance left behind after doing it and also taking into consideration how old they are and their gender as well.

If they are under 6 months, they are not sexually mature yet and are not looking to mate, but if they’re over 6 months and they’re already familiar with their area, then chances are they are trying to mate.

Another thing to take into consideration is that while both male and female leopard geckos rub their bellies on the ground, males are the only ones who do it attract the opposite sex.  Females are unable to create the type of wax that males can, so rubbing their stomach on the ground for that reason would do them no good. 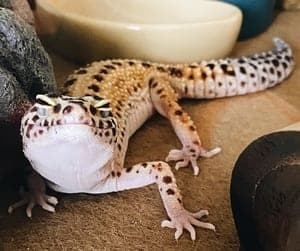 If you’ve never owned a leopard gecko or at least don’t have one that’s a male, then you might not know what the wax that I’m speaking of looks like and although I’m unable to provide a picture of this wax at the moment, I can explain it so that you know whether or not your leopard gecko is looking to mate or just getting used to their area.

But basically, the wax that males secret is yellow in color and kind of resembles ear wax.  Over time, it can build up in the tank and create quite the blob if not cleaned up, but this will only happen if they rub on the same spot multiple times throughout the course of them trying to find a partner to mate with.

It will sometimes even harden up and get stuck in their V-shaped pores at which that point it should be removed by slowly pulling it off or gently rubbing it away with a soft washcloth and warm water.

A lot of leopard gecko owners go long periods of time without knowing what gender their leopard gecko is, so identifying whether or not your leopard gecko is spreading this wax in the tank or checking if it’s stuck in their pores is one good way to tell.

Whether it be spreading their scent or fighting others to show that the environment they’re currently occupying is theirs, they do have their ways of letting other leopard geckos know that they’re in the area and that they’re nothing to play around with.

Leopard geckos are very affectionate and loving creatures, but when it comes to other leopard geckos, they can be a little mean, but really, that’s normal with almost all species of animals.  When they’re in a loving mood, you will know it by the waxy substance they leave behind, but that’s only when it comes to males.

While one way of marking their territory is to show dominance, the other way is to attract a female leopard gecko in attempts to create more babies and both are useful behaviors that they have in order to not only survive but to reproduce and thrive as well.

Keep in mind that females will display this behavior as well, but usually only when first bringing them home or when introducing a new piece of equipment to the tank.  If you catch your male doing it and you see that there’s yellow wax in the tank or on its underside, then it’s likely that they want to mate.  If you don’t plan on breeding them though then don’t worry, this behavior will pass.