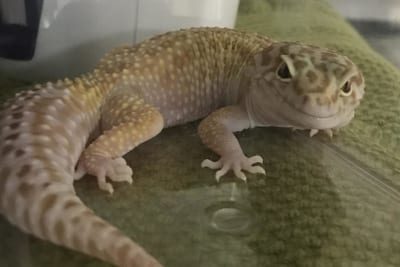 As we watch our leopard geckos sit in their tank all alone with nobody to interact with besides us, we naturally start to wonder if it’d be better if they had a little company in there with them.  And while some animals do enjoy being around other animals, some don’t, so that’s definitely something we’ll have to take into consideration before making that decision.  But to answer the question.

Do leopard geckos need friends?  No, they don’t.  Leopard geckos are solitary reptiles, so they prefer to be alone.  Despite that fact though, many owners have had success with cohabiting two of them together, whether that be a male and a female or two females.

So, next time you’re staring at your leopard gecko and feeling sorry for them, please don’t, they actually enjoy being alone.  They aren’t like us.  They only care about one thing and one thing only, and that’s surviving.  Can you still house two leopard geckos together?  Yes, but you’ll need a large tank and they can’t be two males.  With that said though, let’s see what else we can find out.

Some say that you can house two leopard geckos together while others don’t, so really, it’s up to you to choose whether you want to or not so you can see for yourself if it works out and then go from there.  But, before you even consider this, please keep in mind that two males can’t and should never be housed together.

The reason for this is because just like most species of animals, leopard geckos are territorial and like to show their dominance.  Many people have tried housing two males together, but the outcome has never been pretty.  There will likely be a lot of fighting, pestering, bullying, and harassment that will take place if done.

If you really want to cohabit two leopard geckos together, then a better option is to do what I stated above and have either two females or a male and a female together.  Depending on your leopard geckos personalities, females can even be a little snippy while in a tank together, but if the tank is large enough, they are still a lot more likely to coexist together without any issues compared to if two males were together.

A 20-gallon tank is good enough for most leopard geckos of any size and it’s said that you’ll need another 5-10 gallons per extra gecko, and while this is okay in some situations depending on how well your leopard geckos can tolerate each other, it’s a much safer option to put them in a tank that’s at least 40 gallons large to give them ample room and also to just be on the safe side.

Not only that, but two leopard geckos means double the equipment as they don’t like to share, so giving them that extra space is needed for that reason as well.  I have friends that are breeders and they use this 50 gallon tank. It will provide your leopard geckos with a ton of space so they won’t be on top of each other.

And because there is a chance that you could run into problems with both geckos being in the tank, I also recommend having a 20-gallon tank on hand just in case you have to separate them.  I understand that things can get a little costly this way, but you run a small risk when cohabiting two leopard geckos, so it’s the best thing to do just in case you have to take one of them out for safety purposes.

The Risks of Cohabiting a Male and Female

While cohabiting a male and female together is much less risky than having two males together, it can still be a risk putting them in the same tank if you don’t plan on breeding.  When so close together, it’s inevitable that your female will get pregnant in a matter of time, so keep that in mind before considering this pair up.

A plus side to this situation though is that female leopard geckos are only fertile for 6 months out of the year, which means that even if mated with a male, they won’t be able to become gravid (pregnant) until it’s time for them to ovulate.  Ovulation period usually starts around January and ends in about June or July.

So, if you want to chance housing them together anytime after or before those times, then those would be the best times in order to avoid pregnancy.  Even then though, there are still downfalls to doing this.

The reason is because although males aren’t as aggressive with females as they are with other males, they can still be very, very annoying to the female that they are housed with.

Male leopard geckos are known to harass and bother females constantly in attempts to mate and this can cause the female to become overly stressed out, and if you read any of my other articles, you know how critical it is to make sure our geckos aren’t under any stress.

As stated above though, if you’d like to chance housing a male and a female together then feel free to try it, but please make sure you have another tank handy just in case there’s too much tension and fighting goes on.  The last thing you want is to have two leopard geckos in a tank fighting with no way to separate them.

By the way, if you’d like to learn more about the pregnancy process when it comes to leopard geckos along with the signs and symptoms to look out for if you suspect that they are, then click on this article here that I wrote and you’ll have all of the information you need in the case that your leopard does accidentally get pregnant.

The Risks of Cohabiting an Adult and Baby 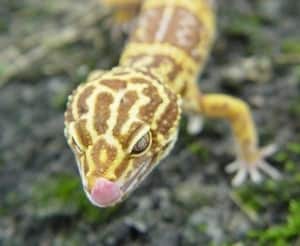 As stated above, it is possible to get away with cohabiting two females or a male and a female together, but there is an exception that you should keep in mind before doing this, and that exception is that no matter what two leopard geckos you pair together, there should never be an adult and baby leopard gecko in the same tank, even if they are related.  Here’s why.

Female leopard geckos are great at protecting their eggs and getting very defensive while gravid so that they can keep themselves safe from any potential predators, but once the eggs hatch, it’s a different ball game.

Instead of your adult leopard gecko looking at the baby gecko as something to protect, they look at them as more of a nuisance or even worse, as a meal.  It’s not uncommon for adult leopard geckos to attack or even eat their young shortly after they hatch and that’s why they shouldn’t be paired together.

While some species of animals will protect other animals that are younger than them even if they’re not their own, this, unfortunately, is not the case when it comes to the leopard gecko.  So, just like you would house two males in a separate tank, you’ll want to house the babies from the adults as well.

Leopard geckos have no remorse for their young, so it’s important to take the necessary measures in order to keep the babies safe at all times.

Leopard geckos don’t necessarily need friends, but some of them definitely don’t mind them.  Because each leopard gecko can display different behaviors though, the only way to tell if your leopard gecko will be good around others is to experiment.

It might work out but it might not, but it’s worth a try if you’re insistent on cohabiting them.  Just remember to never put a baby and an adult together and two males together as these pair ups will give you the worst possible outcomes.

Also, keep in mind that you do run the chance of your leopard geckos getting pregnant if you house two of the opposite sexes together, and if you’re not a breeder, that is not a responsibility that you’ll want.

For the best matchup, you’ll want to house two females together.  Females can also be a little intolerant of each other, but they are the most likely to get along out of all of the other potential pair ups that you could do and you won’t run the risk of either of them becoming pregnant as well.

Just make sure to have a large a tank that’s at least 40 gallons, double the amount of equipment so there won’t be any fighting over it, and an extra tank just in case things get a little out-of-hand while they’re together and you should be good.