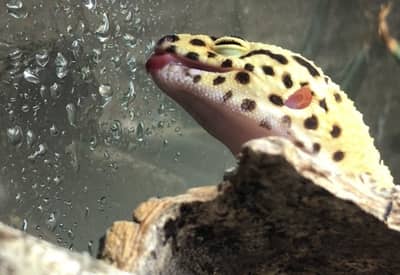 Despite the fact that leopard geckos are lizards that come from dry, non-tropical habitats such as Pakistan, Afghanistan, and Iraq, they still from time-to-time enjoy being misted.  That isn’t because they enjoy feeling the cold spurts of water hitting their skin, but because it helps them in situations that benefit them in some way, shape, or form. In this article we’ll find out… do leopard geckos need misting?

If you’re someone who lives in an area where the air gets really dry or have a leopard gecko that consistently has a hard time shedding, having something to mist them and their tank with on hand will be just what you need to ensure their safety.

So while there are some conflicting opinions about misting a leopard gecko, most believe that it can be beneficial.

How often should leopard geckos be misted?

For hatchlings, babies, and juvenile leopard geckos up to 3 months old, mist daily. 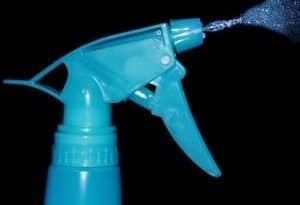 There are two ways you can mist your leopard gecko and these ways include you having to mist them yourself or setting something up that can mist them for you.  Which one you choose is completely up to you, but one way provides a little more convenience than the other for a few different reasons.

Having said that, let’s first take into consideration what would be the most beneficial for you by looking at your lifestyle and then going from there.

If you’re someone who is very forgetful, has to go to bed at a fairly early time consistently or just like the convenience of having some things in life be automated, then I would recommend that you look into going the automatic route.  Automatic misters are great because not only do they offer you convenience, but they also ensure that your leopard gecko is staying safe as well.

A lack of moisture in the air can cause a multitude of different problems that could potentially cost your leopard gecko their life and if they’re ever in a position where they need to be misted and you accidentally forget to do it, problems can arise.

With school, work, and pretty much anything else that goes on in our day-to-day lives distracting us from doing the things that are important to us, forgetting to mist their tank isn’t something that is unlikely to happen.

In addition to that, leopard geckos wake up around 8:00 P.M. because of the fact that they’re crepuscular and for the owners who have to go to bed early due to life’s daily obligations, getting around to misting them can some days be a little bit of a challenge.

Taking all things into consideration, if you feel that there’s a possibility that you might one day miss a chance to mist them in a time where they really need it, I recommend checking this misting system out here over on Amazon.

Humidity levels within the tank can drop during the night time so in order to make sure they have the humidity needed in order to shed successfully and avoid subjecting them to extremely dry and hot air from not having enough of it, getting a misting system to spray in the tank at night automatically will do you wonders.

You can set it to spray your tank when your leopard gecko usually wakes up and you won’t have to worry about trying to remember if you sprayed your tank the night before or not when you wake up.  Owners whos humidity levels stay at a fairly consistent 20%-40% don’t need this, but those who have trouble with their humidity levels on a regular basis will.

Some have trouble with humidity issues while others don’t, so if you’re someone who does, again, check out that automatic sprayer.  For those who don’t have busy lives or a lot of responsibility, spray bottles are also very effective for humidifying an enclosure. It doesn’t really matter which spray bottle you get, but if you’d like to know the one I’d recommend, then check it out here.

Misting is great for leopard geckos when it’s done in moderation but if there’s too much of it going on, you can actually cause your leopard gecko to be subjected to respiratory issues due to high levels of humidity.

As stated above, leopard geckos are not by any means tropical animals, so when they’re trapped in an enclosure with very thick, hot, and humid air, it starts to take a toll on their bodies.  This is because they have very small lungs so when they breathe in this thick air, it causes a strain on their ability to properly inhale and exhale as a result.

Because of that, that’s why it’s only recommended to spray their tanks only once a day and when needed.

Getting humidity to go down can sometimes be challenging and might even require you to remove items from the tank that hold moisture such as Eco Earth or any other moisture-holding piece of equipment so in order to avoid having to do these things, spray their tank only once and at night right before you go to bed.

The humidity will probably rise for a short amount of time but after about an hour or so, it should go down to between the 20%-40% mark.  After spraying, be sure to keep your eye on your hygrometer to make sure that the humidity does in fact drop before heading out to bed.

Respiratory infections for your leopard gecko aren’t fun to deal with and according to this article here, it’ll likely take a little veterinarian care and some antibiotics in order to clear it up.  So before you follow the advice of some other people out there who recommend misting the tank multiple times a day, please don’t.

Humidity levels rising up and then dropping shortly after are normal after misting, but if your tank is constantly humid from too much spraying, your leopard gecko will start to feel the effects of doing that sooner than later. 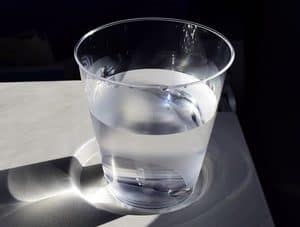 A lot of the time after misting, some leopard geckos will lick the water droplets off the sides of the tank or sometimes off of any decorations that you may have in there and because of that, it’s best that you have your misting water purified before spraying it so that you’re not allowing them to drink water that could potentially be contaminated.

There are things in tap water and sometimes even bottled water that can be harmful to your leopard gecko’s health, so by purifying it, you’re ensuring that they’re not being subjected to things that could possibly end up causing them harm.

If you’d like to look into some of the chemicals found in tap and bottled water along with ways to purify it, I suggest reading this article here that I wrote.

Bottled water is much safer than tap water but even that has traces of contaminants in it.  So for that reason, purifying all your leopard gecko’s water whether it be the water in their dish or in a mister is the best thing that you could possibly do for them before putting it in their tank.

Although unpurified water is unhealthy for us as well, our bodies are a lot less likely to take damage from it due to our much stronger ability to flush out toxins than they can.  That said, if unpurified water has the ability to affect our health, then you can only imagine what it can do to a leopard geckos.

So then, do leopard geckos need misting? Leopard geckos themselves don’t technically need to be misted. However, because misting can help in certain situations, it’s important that you have either a spray bottle or misting system like this one on hand so that you can use it whenever you need it.

If it were possible, a lot more owners would mist their tank all throughout the day simply because leopard geckos seem to enjoy it but since we, unfortunately, have to take humidity levels into consideration for the sake of protecting their health, it’s not.

The act of misting their tank itself isn’t the problem, but it’s the rising humidity levels from doing it that can turn it into one.  If you’re not already purifying your water, then I recommend you start doing so as soon as possible.

Sink water and bottled water have the potential to carry way more gunk in it than you could probably ever imagine, so filtering it before giving to your gecko will help prolong their life by getting all, or at the very least, most of it out.

If you want your gecko to live a long life and healthy life, then purifying your water from here on out will probably be one of the best things you could ever do for them.