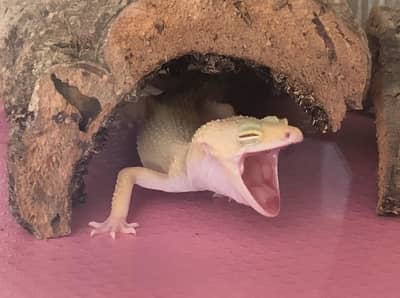 Yawning is a natural bodily function that many animals experience.  You yawn, I yawn, cats yawn, and many other animals yawn as well.  While we’re used to seeing it happen amongst other animals, including ourselves, it’s not something that we’re used to seeing lizards experience, so, it can be confusing on whether they even do it or not.  With that said, let’s find out if they do.

Do leopard geckos yawn?  Yes, they do.  Depending on how much each leopard gecko does it will vary, but it’s definitely something you can expect to see almost every gecko do.  Just like us, they’ll usually yawn when tired or shortly after waking up.

Whenever a leopard gecko yawns, most of the times it’s a harmless act and nothing that any owner should be worried about.  But, excessive yawning could indicate something a little more serious and if you catch it happening to your leopard gecko, then it’s probably safe to investigate a little bit to make sure that they’re okay.  Let’s see what else we can learn about their cute yawn.

When to Look for an Issue 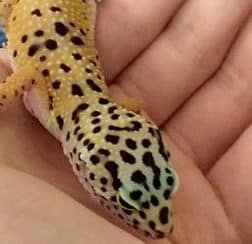 As stated above, yawning in leopard geckos is usually nothing that should raise a red flag and is something that almost all leopard gecko owners will experience at some point while in possession of their lizards.

But, whenever their yawn seems to happen constantly throughout the night or day and they’ve gotten enough sleep to the point where they should feel fully replenished, then there may be something else at play that you may not be able to physically see.

With that said, the first thing to take into consideration if you feel something’s wrong is the possibility of them potentially having a foreign object lodged into their throat.  When this happens, they’ll attempt to make the object slide down into their stomachs by yawning really wide as this opens up their airway a bit.

If you catch your leopard gecko doing this throughout the day with little success and you suspect something is in fact lodged in their throat then doing something such as getting a dropper and squeezing a few drops of water down their throat might be the most logical thing to do in an attempt to help the object pass through.

But, if whatever in their throat is lodged to the point where your leopard gecko can’t get it to slide down on their own without assistance, then they may have something stuck in their throat that isn’t passable and if it did so happen to pass, it might even cause impaction.

If you’re experienced with leopard geckos or lizards in general, then the best thing you can do in this case is to attempt to remove the object yourself with a tool called forceps if the object isn’t too far down into their airway.  Keep in mind though that this should not be performed unless you can see the object in their throat.

If you look into your leopard gecko’s throat and you aren’t able to see anything visibly sticking out, then the next thing you’ll want to do is take your lizard to the nearest herp veterinarian so that they can safely and properly remove the object without causing any damage to your gecko.

While that’s one reason cause, two other potential causes for excessive yawning could also be from a gastrointestinal infection or a respiratory illness as well.  Both of these problems could be caused by poor husbandry and unfortunately cannot be treated by anyone other than a herp vet.

When it comes to those two causes, there are so many factors that could potentially attribute to how your leopard gecko could have gotten either of the two, but it’s up to you to prevent them from happening by making sure your tank is sterile, properly regulated with a safe balance of heat and coolness, and also by providing your lizard with a healthy diet as well.

Tools and Tips for Prevention

Healthwise, because most of what leopard geckos go through is due to poor tank conditions, you’ll want to make sure you have all the right equipment within it to ensure that your gecko isn’t subjected to any of these different illnesses and infections.

And since we now know that respiratory infections are due to poor tank temperatures, you also want to make sure that you have a heat mat or heat lamp along with a thermostat to regulate temperatures hooked up to them as well to ensure that they’re staying in healthy ranges.

An overly hot tank isn’t safe for your leopard gecko to be in because too much hotness can cause them to overheat and potentially pass away if they’re not able to get to cool, fresh air.

But, an overly cold tank is what’s going to cause your leopard gecko to experience a respiratory infection as the coldness will make your leopard gecko’s body work more due to not having the right amount of heat to properly function.

With that said, I’m really hoping all leopard gecko owners have some source of heat hooked up to their tank so that their geckos are getting the heat that they need in order to comfortably survive and stay healthy.  But if not, then I recommend checking out this heat mat here from Amazon.

When paired up with this thermostat here, you’re ensuring that your tanks temperatures aren’t getting too low or too high and you won’t have to worry about any type of respiratory infections happening to your leopard gecko.

For more information on your tank’s temperature, check out this article here that I wrote so you can understand just how important it really is.

Don’t Wait for It to Pass 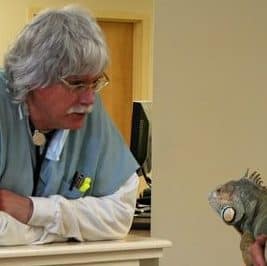 Just like us, when leopard geckos get sick or have a serious infection or injury, they need to be seen by a medical professional in order to get rid of and cure whatever they’re going through.  Some things can be cured at home without medical assistance, but some things can’t and it’s mandatory to have them cared for before it’s too late.

As stated above though, the majority of the time yawning isn’t an indicator that there is anything wrong with your leopard gecko.  But, if the inside conditions of your tank are a little questionable then you may want to consider the possibility that something else may be going on that your leopard gecko isn’t able to fix on without your help.

Tons of leopard geckos pass away every day due to mistakes and poor husbandry, so in order to prevent this from happening to you and your gecko, then I recommend doing heavy research on them in regards to their tank temperature, humidity levels, diet, and overall care and husbandry.

They’re extremely easy to care for, but at the same time, it’s just as easy for something to go wrong that may end up costing them their lives as well.  If you’re doing everything right and everything in your tank is up to par as far as safety goes, then you should have absolutely nothing to worry about.

Leopard geckos are tough creatures and are capable of living for a very long time, but if they’re ever subjected to anything that could put them in harm’s way, then the chances of them living a long life can be shortened substantially and quickly.

Remember, if you spot your leopard gecko yawning excessively (5-6+ times a day), pay attention to their behavior to see if they’re doing anything else alarming, try to find the cause for why they’re yawning so much by checking your tank’s temperature, look at the back of their throats, and then if you don’t see any obvious indicators for why it’s happening, visit a herp vet.

There could be a number of things wrong with them that could be causing them to yawn so much but at the same time, there may be nothing wrong at all.  To keep safe though, follow the steps above and then get professional help if things don’t get better with your leopard gecko within a days time.

It’s okay to give them a little bit of time to see if things go back to normal, but too much time can cost them their lives.

Hopefully, this article doesn’t scare you into thinking that your leopard gecko is experiencing something more serious than what they actually have, but because them having something serious is still a possibility, it’s best to take into consideration all potential causes for why they’re behaving in this way to make sure nothing life-threatening goes unnoticed.

If you could only take one important thing away from this article though, then that’s to always make sure you’re practicing good husbandry.  Leopard gecko lives are lost all the time because of poor tank conditions, so having a safe environment for them is absolutely essential in making sure they don’t fall victim to any of these critical and life-threatening issues.

With the right tank equipment and proper knowledge, the chances of something like this happening to your gecko is slim.  So to make sure you’re not another person who lost their gecko due to a mistake, obtain both and your leopard gecko will live a long and healthy life.