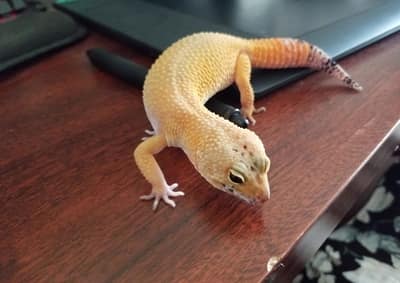 If you’ve been apart of the reptile community for a while, then you might know that some reptiles have amazing senses that not only help them hunt but to detect predators as well.  While some species of lizards have better senses than others, it’s a mystery on whether or not leopard geckos are amongst one of the species that have some of these better senses.  To be sure, let’s find out.

Do leopard geckos have a good sense of smell?  Yes, they do.  Not only is their sense of smell good, but it’s also what has helped them survive out in the wild and in captivity for many years.

It’s not a shock to hear that leopard geckos have used their sense of smell out in the wild to survive, but it might be shocking to hear that they’ve used it captivity as this is the place where they should have to use it the least.  Because some owners keep their leopard geckos in the complete dark though, it’s a helpful sense when their vision is a tad bit limited.  That said, let’s learn more.

All of Their Senses Are Amazing 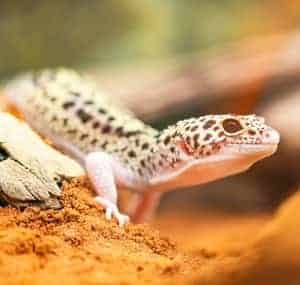 Because leopard geckos have such good senses though, they managed to survive over many, many years and as a result, that’s how they’ve become one of the most popular enclosed pets in the entire world.

They’ve evolved over the years to use their sense of smell, taste, sight, and hearing to their advantage and because of that, they’ve thrived.  Surviving in the wild isn’t easy, especially when you’re as small as the leopard gecko.

But they’ve managed to do it because of their amazing senses and will continue to do it for as long as they’re around.  Also, although it’s cool that leopard geckos can find their food in a completely dark enclosure while in captivity, it’s not something that I recommend for any owner to do.

Leopard geckos could survive their whole life without a glimmer of light because of the abilities that their senses allow them to have.  But because it’s important that they have some sense of when it’s night and day, I recommend keeping them in a room where the sun shines so that they can keep a consistent sleep cycle at all times.

If their senses could help them with that, that’d be amazing.  Because they don’t though, it’s our job to provide them with what they need so that their lives aren’t harder than they have to be.

They Use Their Smell to Identify a Friend or Foe

Unlike us, leopard geckos don’t think rationally.  All they care about is eating, sleeping, and doing whatever else they need to do in order to survive.  Since they can’t physically look at another person or animal and determine whether they’re a threat or not, they distinguish between who’s good and who’s bad by using their amazing sense of smell.

If there’s something or somebody near them that’s carrying a scent that they don’t recognize, they’ll go on the defense almost immediately.

You could be the nicest person in the world, but because they don’t know that and rely on their smell to determine whether you are or not, chances are that they’ll attack anybody who tries to touch them or get near them that they don’t recognize.

Not only will they attack strangers, but they’ll attack their owners that they’ve known for years as well.

You may be wondering exactly why they would do that, but if you’ve carried a certain scent for most of their life and then one day you try on a new lotion or perfume and you reach in your tank to try and pick them up or grab their bowl for feeding, they’ll think you’re a threat because of your new scent and charge at you despite not ever attacking you prior to that.

That might sound crazy, but I have heard of it happening and since they, again, rely on their scent, you can kind of see why something like that would take place.

That said, before touching them or even getting close to them for that matter, wash your hands with unscented soap and then rub your hands on a part of your body that you haven’t washed such as your upper arm so that they know it’s you whenever you decide to reach in the tank.

Rubbing your hand on random parts of your body may seem odd, but if there’s any way you can get your natural scent on your hands, do it so that you don’t end up getting attacked and potentially losing trust between you and your gecko.

As for letting someone else hold them or get near them, I would strongly advise against that.  Not only will that potentially stress them out, but chances are the person trying to hold them might end up getting attacked as well.

It’s kind of like when you’re introducing someone new to your dog for the first time.  They might bark and cause a ruckus for a while but the more you’re around them and the more they get used to you, the less likely they are to react whenever they see you.

It’s a little different with leopard geckos because dogs determine who’s a threat by site, but the same can apply to leopard geckos if you slowly introduce any new smells to them gradually over time. 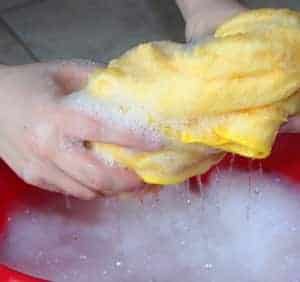 Unfortunately, I don’t have any evidence to prove this, but considering leopard geckos have an extremely good sense of smell, I would think that really strong odors would bother them if too close to the enclosure.

So just to be on the safe side, I would try and avoid bringing any around as much as possible to prevent potentially stressing them out and also to prevent causing them any irritation.

It’s probably safe to use scents such as candles and incense but when it comes to any strong cleaners like bleach or ammonia, I would try and keep those as far away as you can.

Of course, keeping scents out of their tank altogether is impossible since you can’t control where they travel, but for the sake of their health and wellbeing, the least we can do is use whatever strong scents we have from a reasonable distance.

If you have a small room this may be difficult, but as long as you’re doing the best you can at minimizing the intensity for them, that should be good enough.  If you have to, blow a fan in a direction that’s not facing your gecko and crack a window so that the smell can clear out a little quicker.

As mentioned above, I wouldn’t worry about doing this with every scent that you have, but when using anything overly strong, it might be a good idea.

But little do they know that their smell is one of the senses that has kept them alive for many years and will continue to do so for as long as their living on this planet.  Just remember to try and keep the same natural scent on your hands any time you go to touch them and you should be good.

Leopard geckos would never want to hurt their owners, but unfortunately, they only operate on instinct and will attack you simply for the fact that it’s out of their control.

In addition to that, you’ll also want to make sure you’re practice keeping a good distance away from them when using very strong and overpowering scents so that you don’t cause them a ton of stress.

Leopard geckos are lizards that can get stressed out easily and sometimes some of the reasons they get stressed out over don’t make a lot of sense.  But when it comes to a reason like this, you can kind of see why they would react negatively.