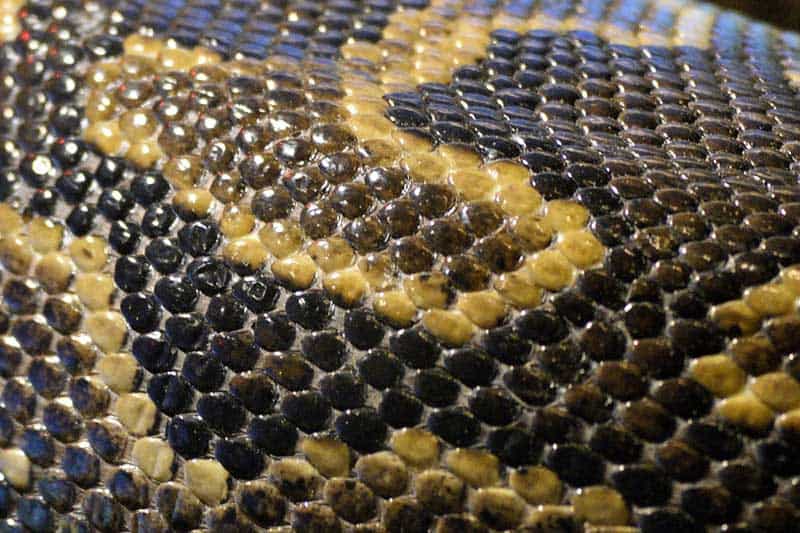 Many people think that snakes have slimy skin, but snakes are an enigma to many people, and the general lack of knowledge about these creatures often leaves people guessing about their characteristics. Snake skin is very different from our own, but is sliminess one of its characteristics?

Is A Snakes Skin Slimy?

Snake skin is not slimy at all, but sometimes the appearance of the skin may look as if it is wet or slimy. Snakes are reptiles which means their skin is covered with scales. Some snakes have shiny, smooth scales which look glossy and almost wet, giving people the impression that the skin is slimy.

Snakes have scales on their skin that acts as armor plating to protect the animal as they slither along the ground and through grass and rocks.

Some snakes have keeled scales, where each scale has a ridge running down the center of the scale. Snakes with these skins often look textured or rough, and if you touch this skin, that is exactly what you will feel.

Other snakes have smooth scales, with no ridge on the scales. The skin of these snakes has a glossy, shiny appearance and sometimes looks as if they are wet.

The wet-look, however, comes from the scale’s glossiness rather than the snake skin being slimy or covered with a wet substance.

Snakes do not have slimy skin, as many people believe. Snakeskin feels cool and dry to the touch, which surprises many people who previously thought the skin was slimy.

Snakes Are Not Amphibians And Have Different Skin

Another reason that many people believe snakes to have slimy skin is that they associate them with amphibians such as frogs.

Snakes are part of the reptile family, not amphibians, and have very different skin. Members of the amphibian family secrete a slimy substance over their skin which performs as a moisturizer and as a barrier between their skin and their watery environment.

Snakes do not need to keep their skin moist since they do not generally spend the majority of their time in the water. Therefore, snakes do not secrete slimy substances to cover their skin as amphibians do.

Snakes have scales to protect their skin, with serves them better in their natural habitat as a dry armor that helps them to grip onto the surfaces they move across.

Another misconception that some people have about snake skin is that their skin is oily. This perception also stems from snakes with shiny, glossy scales and a thin sheen of oil on them.

This is only perception since snakes do not secrete oily substances through their skin. Snakes do not have oily skin; the skin feels smooth and cool but not oily or greasy in any way.

Why Does Snake Skin Feel Cool To The Touch?

This is why a cold snake will be sluggish and not able to operate at a normal speed. Snakes need to find a warm spot so their bodies can absorb heat from their surroundings before they can function normally.

Likewise, when a snake gets too hot from being in the sun, they need to find a cool spot in the shade to cool down so they don’t overheat. They regulate their body temperature by finding an environment that gives them what they need: heat to warm up or cool, dark places to cool down.

A snake’s skin normally feels cool to our touch because its body temperature is generally cooler than our own mammalian body temperature. This makes snakes feel cool on our skin when we hold them in our hands.

Are All Snake Scales The Same?

Snakes skins are covered in scales encompassing their entire body, but the scales, sometimes called scutes, are not the same in all locations on their body.

The scales can vary in size, color, and texture in different places on the snake’s body. Larger and fewer scales are usually present on the head, and smaller scales are on the dorsal or top side of the body.

Even on snakes with keeled dorsal scales, the belly scales are usually smooth, lighter in color, and larger than the other scales. The belly scales also have a glossy, almost waxy-smooth feel to them.

Are Snakes Slimy After They Have Shed Their Skin?

Snakes have skins that do not stretch and grow in size as the snake grows. The scales on the skin are rigid and have no elastic properties that allow them to stretch to accommodate the snake’s growth. 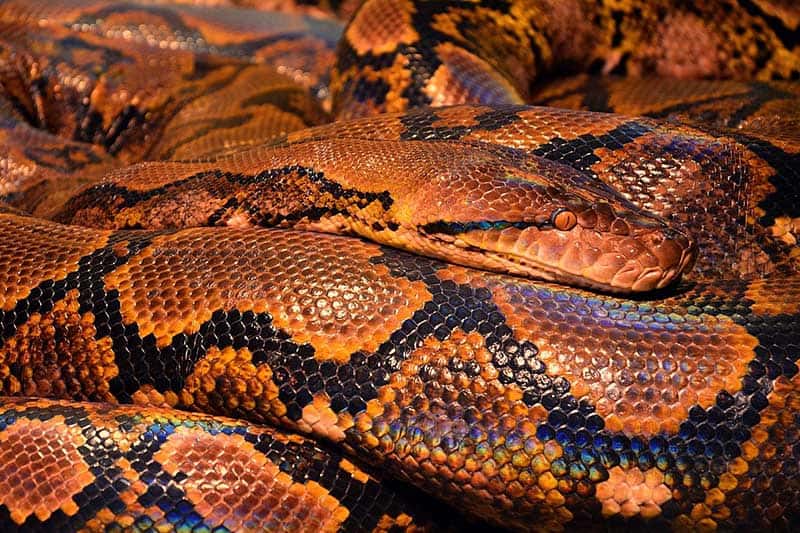 This means that once the snake gets to a certain size, it outgrows its skin. At this point, the snake will need to shed its skin to get rid of the old, small skin and start its next growth cycle with the fresh skin underneath.

A snake’s growth rate is determined by the availability of food, which means that a snake will grow less quickly when food is scarce and grow faster when food is abundant.

Immediately after the shed, a snake does not feel wet, slimy, or oily because most of the secretion comes off with the old skin.

It is a misconception and a myth that the skin of a snake is slimy, oily, or moist. A snake will feel cool and dry to the touch, even after recently having shed its skin.

A snake never feels slimy at any time in its life, other than when it has just hatched from its egg. At this point, it is still covered with the contents from the egg. But even in this instance, it is not a characteristic of its skin, but rather due to an outside influence; that of the egg’s contents.

So if anyone tells you a snake feels slimy, you now know the facts, and you can set them straight!