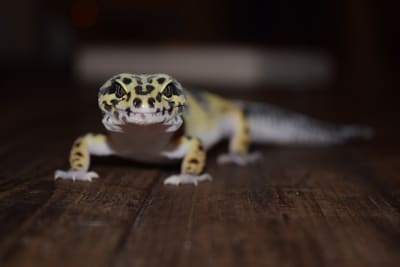 As a leopard gecko owner, this is probably one of the scariest things to ever happen.  You’re holding them and then out of nowhere, they slip out of your hands and fall to the surface below.  You’re in shock, they’re in shock, and it feels like time has just stood still because of how fast everything had just happened.  Despite how you’re feeling though, here is what needs to be done.

What happens if you drop a leopard gecko?  You’ll want to pick them up immediately and inspect their bodies to make sure that they haven’t sustained any injuries.  If they have, then at that point, it’s best to contact a veterinarian.

Leopard geckos are very tough little creatures, but depending on what they landed on and how high of a fall they had, it’s very possible that something may have broken.  Because this isn’t always the case when something like this happens though, your gecko may also be perfectly fine as well.  After you’ve picked them up and inspected them, here’s what you should do next.

Keep an Eye on Them 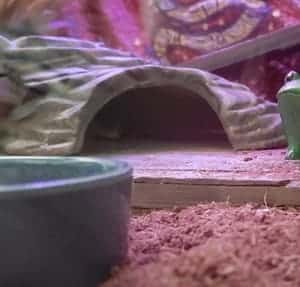 As stated above, if you’ve noticed any broken bones whether that be toes, ribs, or feet, you’ll want to reach out to your local veterinarian as soon as possible for advice on what to do next.

According to this source, some broken bones in reptiles can be repaired at home depending on how bad the break is.  So before freaking out and rushing to the vet, call them first and see what they feel your next course of action should be.

If you don’t think that your leopard gecko has broken any bones, then what you’ll want to do after thoroughly inspecting their bodies for any further cuts or scrapes is to place them back into their tanks and keep an eye on them for the next 24 hours to see how they behave.

If your leopard gecko seems fine after picking them up, then chances are that they didn’t sustain enough damage to cause you to worry any further.

Just to be safe though, it’s good to watch over them and check up on them frequently to make sure that nothing has broken inside of their bodies that you may not have noticed upon picking them up the first time shortly after their drop.

For example, your leopard gecko could have potentially broken a rib because of how they landed after they fell, but because their stomachs are one of the thickest parts of their bodies in addition to their tails, you may not notice that anything is broken by simply just inspecting them until they start showing odd symptoms.

Because of that reason, it’s a good idea to watch over them quite frequently over the course of a day to ensure that they’re not experiencing any respiratory issues as a result of the rib that they’ve potentially just broken.

If over time you do notice that they’re having trouble doing simple things such as eating, breathing, or even walking, again, reach out to your local veterinarian for further advice on what you should do from that point on.

Treating a Cut or Scrape

Cuts and scrapes likely won’t occur if your gecko didn’t fall on a rough surface like concrete, asphalt, or cement, but if you did happen to drop your leopard gecko on one of these surfaces or they did end up sustaining a cut or scrape from another type of hard surface, then you’ll want to make sure you start treating it as soon as possible to prevent it from getting worse.

In order to do this, you’ll want to get your hands on an antiseptic solution that is safe for reptiles so that no further damage is sustained and also so that treatment can take place shortly after your leopard gecko had just received their scrape or cut.

That said, I highly recommend checking out this stuff here from Amazon.  These types of solutions come in either spray form or bottled form, so depending on where your leopard gecko has sustained their injury, choose the one that makes the most sense to you for getting the job done.

If they have a scrape or cut on their head or any other part of the body close to that area, then it’s probably best to get the liquid solution so that you don’t accidentally spray the solution into their face or even more specifically, in their eyes or mouth.

If the scrape or cut is anywhere else on the body, then the spray bottle may be a better option for you.  If you don’t think that you’d be comfortable using the spray bottle though, then you can also always apply the liquid betadine to their injured area by gently using a cotton swab or Q-tip instead.

If by any chance you have to soak your leopard gecko in this stuff because of a large scrape, then make sure you dilute the solution with water until it reaches a tea-like color.  The reason it has to be diluted when soaking them is so that the solution doesn’t kill off the cells responsible for healing the injured area.

Not diluting it won’t cause any major effects on their health or anything, but it can hinder your leopard gecko’s ability to heal from the cut or scrape as quickly.  And while it is an aggressive and strong antiseptic, it is safe for reptiles and has been used on them for a very, very long time. 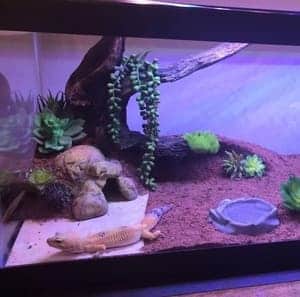 All leopard gecko owners tanks should be clean at any given time but if you’re dealing with a cut or a scrape, then it might be necessary to clean out your tank before putting your leopard gecko back in it to prevent any further issues.

If they have a broken bone, then this isn’t something that you should worry about as that type of injury is internal, but when it comes to open wounds, you’ll need to make sure their surroundings are clean so that the bacteria from their fecal matter and urates don’t enter into their wound and make things even worse than they already are.

Seeing as leopard geckos are very adventurous and curious pets, you will have to clean everything.  Leopard geckos climb on their hides, decorations, and anything else put into the tank on a daily basis so doing this part is an absolute must in ensuring their health and safety.

If you’d like to know what I use to clean out my leopard geckos tank along with the items within it, then click here and take a look at it over on Amazon.  It’s a very useful item to have in times like this and it’s great for killing a lot of bacteria off that lingers around in the tank.

While you’re cleaning your tank out, I either recommend placing your leopard gecko in a backup tank that you may have, a homemade and ventilated Tupperware container, or in a plastic carrier until the tank is completely clean and able to be used again by your leopard gecko.

If you don’t have a backup tank or Tupperware container, then it might be useful to get something like this here so that your leopard gecko can have somewhere sanitary to go while you clean out their main tank.

It’s a little sturdy, plastic container that I use for keeping my gecko in whenever replacing their substrate, doing general maintenance to the tank, or even when taking them outside for a little bit for some sun.

Infections are very real and can happen if an open wound is overly exposed to bacteria in their tank, so before placing them back in there after you’ve seen that they been cut or scraped, please keep that in mind so that you don’t accidentally end up making the healing process not only more stressful for them, but stressful for you either.

Believe it or not, many owners who have dropped their leopard geckos haven’t experienced any major issues after the incident had happened.  But because they’re so small and have very fragile body parts, it is not unlikely for injuries to occur after because of their stature.

Be sure to remember that instead of just picking them up and assuming they’re okay, inspect every part of their body to make sure nothing has happened.

Unnoticed scrapes, cuts, or broken bones can be very painful for your leopard gecko if not cared for, so it’s very important that a physical inspection of the state they’re in after their drop is performed immediately after it’s happened.

Also, unlike doing what some other leopard gecko owners have done, don’t place them back into their tank and assume that they’ll heal on their own after sustaining their injury.  Yes, leopard geckos can recover from a lot without the assistance of their owner or a professional.

But because things can get worse for them if they’re not cared for after falling from a drop that high, it’s not very wise to let them heal on their own.  For example, if they have a broken toe, the first thing you’ll want to do is contact a veterinarian as this is a very serious injury.

Hopefully your leopard gecko hasn’t sustained anything that will require a lot of attention, but if they have, make sure you give it to them so that they heal up quickly with no problems.