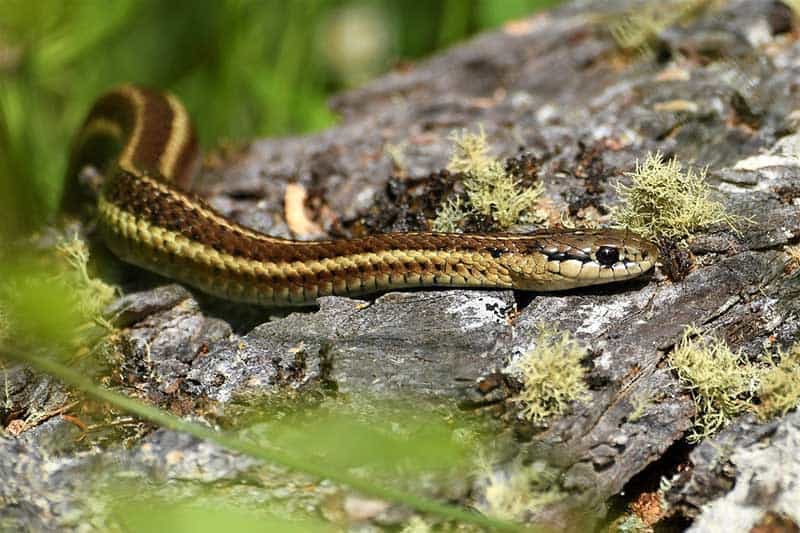 There are many types of snakes all over the United States, and a lot of them are found in Pennsylvania. But there’s one type of snake in particular that people come in contact with quite often, the garter snakes. Garter snakes can be identified by their dark top and light stripes along their sides as well as being very thin with little distinction between their heads and necks. Ribbon snakes, a subspecies of garter snake, are even more slender than that. With all that said, let’s learn a little about the garter snakes in Pennsylvania.

3 types of garter snakes in Pennsylvania

Eastern garter snakes are very slender with three light colored stripes running down their bodies. Adults are black, greenish-brown, tan, or gray. One stripe runs down the back and two more run down each side. The stripes tend to be yellow, green, brown, blue, or white. Sometimes they don’t have stripes at all. They also might feature a dark checkerboard pattern. Juveniles have the same coloration as the adults.

Garter snakes actually have slightly venomous saliva, since they’re not constrictors it helps them hunt. They usually just swallow their prey alive. Garter snakes can be found in pinelands, hardwood hammocks, cypress strands, prairies, marshes, bogs, and anyplace with flowing water. They’re also found in suburban areas where development encroaches on their habitat.

The eastern garter snake is not a threatened species and is commonly found all over Pennsylvania and North America. However, they’re still affected by water contamination, urban expansion, and industrial development. All these factors are hazards to these snakes and their environment.

Garter snakes are not dangerous, since they have no venom or even fangs. They rarely bite. When confronted, a garter snake will typically flee or take shelter in water. Considered docile, they avoid direct contact with people and pets.

The shorthead garter snake has a blunter snout than most garter snakes. They tend to be olive or olive-green in coloration and have three beige to yellow stripes running down its body.

Shorthead garter snakes breed in early spring. They are viviparous and give birth to 10 to 40 live young. For their diet they eat earthworms exclusively. These snakes can be found in old fields, meadows, and wooded areas.

Like most other garter snakes, the shorthead would rather flee than fight a threat. They will expel foul-smelling musk and feces from their cloaca as a defense mechanism.

The eastern ribbon snake is very slender with light colored stripes running down its length. Adults are brown, olive-black, or bluish-black. One stripe runs down the back and two more run down each side. The stripes tend to be yellow, beige, blue, or a light green. Sometimes they don’t have stripes at all. The head is barely distinct from the neck. They have a distinct white spot in front of each eye. Juveniles have the same coloration as the adults.

Eastern ribbon snakes breed from July to September and females give live birth to anywhere from 3 to 26 young. Like other garter snakes, eastern ribbon snakes eat frogs, salamanders, and freshwater fish. They can be found in all the same habitats as well.