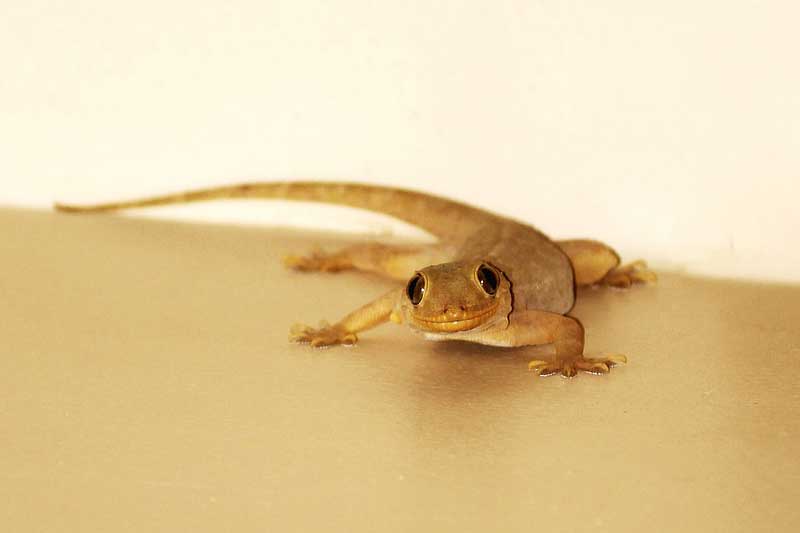 There are at least 1,500 known species of gecko in the world, many of which are found in the United States. In this article, we will take a closer look at the different species of geckos in Florida.

What is a gecko? A gecko is a small lizard that is abundant in almost every environment, found in every continent on Earth except Antarctica. Due to the many different species that thrive in many different environments, geckos come in plenty of unique forms. Many are nocturnal and can change colors.

The reef gecko is the only species of gecko that is native to Florida, all others are invasive. These geckos are most commonly seen at dusk and can be found in southeastern mainland Florida, the Florida Keys, and the Dry Tortugas.

Reef geckos are small, usually around 2 inches long. They are brown with black stripes and have several small, dark spots on their bodies. Females may have two white eye spots behind their necks, but these are not always present.

Despite their small size, reef geckos are able to live for up to 20 years in captivity.

Tropical house geckos can be seen in multiple different parts of southern and central Florida, but they are native to sub-Saharan Africa.

Tropical house geckos can be up to 5 inches long, and females tend to be slightly larger than males. These geckos tend to communicate with each other through vocalization, specifically with chirps that can be in many different frequencies.

The flat-tailed house gecko, nocturnal and native to Asia, resides in mainly urban areas in Florida, namely in counties such as Miami-Dade, Broward, Pinellas, Lee, etc.

Flat-tailed house geckos are generally about 3 and a half inches long. A key feature of theirs would be the thin flaps of skin along the sides of their bodies.

The flat-tailed house gecko has the extraordinary ability to spread these skin flaps and use them to hide its own shadow to blend in with its surroundings. This ability, coupled with its color changing capabilities, makes it incredible at hiding in plain sight.

The Mediterranean house gecko is, as the name suggests, native to the Mediterranean region. It is widely spread throughout Florida, and it is generally expected to be found in urban areas.

Mediterranean house geckos tend to be 4 to 5 inches long, and can be recognized by the numerous warts on its skin. These geckos are also nocturnal color changers, like many others.

The Mediterranean house gecko is a very adaptable species, which is evident by how far it has expanded worldwide. It’s safe to say this little creature is well established in the Sunshine State.

The common house gecko is native to southern and southeastern Asia, and it is mainly seen in a few specific areas of Florida, e.g. around Stock Island, Key West, Homestead, and Fort Myers.

Common house geckos are usually 3 to 6 inches long and tend to be light gray, brown, or white in color. These geckos have multiple rows of spines around their tails.

The common house gecko can be quite territorial, and it will likely bite other geckos of its species if it feels provoked. These bites are harmful to other geckos, but they are not strong enough to harm humans.

The tokay gecko is native to Asia and certain Pacific Islands, and it can be found mainly in southern Florida.

Tokay geckos are one of the largest species of gecko in the world, capable of being as long as 14 inches. Male tokay geckos are rather brightly colored, while females are duller.

The tokay gecko is known to be very aggressive, and it has a rather painful bite that is capable of piercing skin and causing bleeding. This bite can be stronger depending on the gecko’s size.

The white-spotted wall gecko is native to northern Africa, and you will mainly find it in Miami-Dade and Lee counties in Florida.

White-spotted wall geckos can be up to 6 inches long, and they are most characterized by their gray backs, white bellies, four white spots on their shoulders, and the many large, rough scales present throughout their bodies.

As its name suggests, the white-spotted wall gecko likes to cling to the walls of buildings. It is also nocturnal, and it will bite if provoked.

The Indo-Pacific gecko, native to Southeast Asia, is a well established species of gecko in Florida, known from several areas throughout southern Florida, the Keys, and even a few areas in the panhandle and northern Florida.

Indo-Pacific geckos are usually between 4 to 5 and a half inches long, and they are most distinguishable from other species by their smooth skin and yellow to orange bellies.

The Indo-Pacific gecko is parthenogenetic, meaning a female can lay fertile eggs without a need for a male to fertilize them. Like many other species, these geckos are also nocturnal.

The ashy gecko is native to Cuba and Hispaniola, and it can be found in the Florida Keys at dusk and night.

Ashy house geckos only reach close to 3 inches long, and they are a dark grayish-brown color with white spots throughout their bodies.

The ashy house gecko is considered a dwarf gecko, but it is on the larger side of dwarf geckos, which can be as small as half an inch long.

The ocellated gecko, which is native to Jamaica and Cuba, can be found in the Lower Florida Keys at dusk.

Ocellated geckos are around 2 to 2.5 inches long. The backs of these geckos are usually brown in color, and there are small white spots located on the napes of their necks.

Although these geckos have an established population in Florida, they are still quite rare in the area. They’re often seen around piles of debris and leaves.

The moorish gecko is native to the western Mediterranean area of Europe and North Africa, and it can be found in Lee and Miami-Dade counties in Florida.

Moorish geckos can be up to around 6 inches long, and they are usually a sandy gray color, but as they are nocturnal color changers, this coloration can be darker or lighter depending on the time of day.

These geckos are considered wall geckos, so you will find them mainly in urban areas on walls at night.

The yellow-headed gecko is a species native to South and Central America. In Florida, this gecko can be found in Miami and the Keys.

Yellow-headed geckos can reach up to around 4 inches long. Male geckos of this species, as their name suggests, have unique yellowish heads. Females, however, are more gray.

Unlike many other geckos, the yellow-headed gecko lacks the toe pads that would allow them to stick to smooth, vertical surfaces. These geckos, instead, have rough and thin skin on their toes.

The golden gecko is native to Vietnam and it was introduced to Florida through the pet trade, where it now has an established population.

Golden geckos can be up to 8 inches long, and they are characterized by the coloration of the scales on their bodies, which are gold.

Male geckos of this species are usually larger than females. Female golden geckos generally stay about 5 to 6 inches long.

The mourning gecko is native to Southeast Asia, and similar to the golden gecko, it was introduced to Florida through the pet trade and is now established in the state.

Mourning geckos can reach close to 4 inches long, and they are usually light or dark tan. These geckos are also nocturnal color changers, so their coloration is prone to changing at different times of day.

Similar to the Indo-Pacific gecko, the mourning gecko is an all-female species, and it reproduces through parthenogenesis.

The gold dust day gecko is native to northern Madagascar, and it is said to be found in the Florida Keys, although it is not commonly seen.

Gold dust day geckos are usually around 4 to 5 and a half inches long, and they are known for their vibrant and spectacular coloration of blues, yellows, and greens.

As its name suggests, the gold dust day gecko is actually active during the day, while most other gecko species are nocturnal.

Other Geckos in Florida