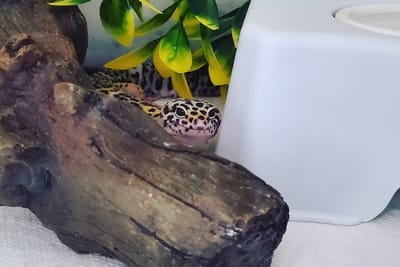 Because leopard geckos are from an area where conditions can be rough, they have had to learn how to adapt to their environment in order to survive.  Between raging temperatures, predators, and periods of time throughout the year where weather is colder and food is scarce, adaption for a leopard gecko is the difference between life and death.  Let’s see how they do it.

How do leopard geckos adapt to their environment?  They adapt by utilizing their senses and by displaying defense mechanisms that keep them safe from any potential predators whether that be in captivity or in the wild.

Leopard geckos are tiny creatures, but their capability to adapt in harsh environments is amazing, to say the least.  They aren’t invincible, but what they’re able to do for their size to keep safe and make sure they survive is awesome.  These same abilities to adapt are what allow them to live for 20+ years in and out of captivity.  Because this is an interesting topic, though, let’s go a little deeper.

How They Adapt in the Heat 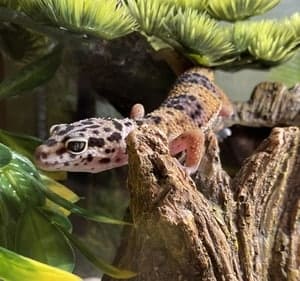 As stated above, leopard geckos have grown to be able to adapt to harsh conditions.  So whenever they’re faced with a threat or harsh temperatures, they adapt accordingly.  For example, if a leopard gecko is out in the wild in very high temperatures and they need to escape the heat, they’ll do one of the two things.

They will either find a nice, shaded rock to hide under or burrow themselves underground to get to a cooler surface.  Leopard geckos are born in hot countries within the world, but that does not make them immune to the heat.  They need coverage and shade in order to cool down to avoid having a potential heat stroke and will do whatever they can to find it.

They do the same thing while in captivity.  If temperatures get too high, they will utilize their hides and dig into their substrate to try and escape the heat.  For situations like those, it’s good to have a thermostat on hand so that you can avoid taking the risk of your tank even getting to that point.

It’s easier for them to escape harsh temperatures while in the wild, but in the tank, they have very limited places to run to.  On top of that, the heat is trapped in an enclosed area that can make it that much more overwhelming.  If you’re a leopard gecko owner already and you want to avoid this from happening, try a thermostat for proper regulation (heat mats only).

Most owners know to always have a device to regulate their temperatures, but some don’t, so I figured with that recommendation that I could help those who are newer to owning their geckos.  Heat lamps and heat mats get extremely hot, so trying to set up a successful tank without having something that will keep those temperatures down is very hard and pretty much impossible, especially if you’re a busy person and aren’t at home all the time.

How They Adapt in the Cold

While leopard geckos don’t like temperatures to be overly hot, they also don’t like them to be overly cold either.  Whenever things get too cold for them,  they’ll do the opposite of what they do when too hot and stay as still as possible in order to conserve energy.

During this time, they will eat less, move a lot slower, and in some cases, won’t eat at all depending on the gecko.  Displaying all of these behaviors will usually mean that they’re in a state of brumation and won’t start moving and acting normally again until the temperature picks back up, which is usually during the spring season in most places.

If you don’t know what brumation is, then basically it’s a form of hibernation.  They move slower, eat less, and are just overall lethargic, but unlike full-blown hibernation, they are still active and will get up to eat, drink, and poop whenever they have to.  If you’d like to know more about what brumation is, then check out this article here that I wrote that goes into a lot more detail about it.

They don’t only do it in the wild, but they also do it in captivity as well depending on where you live.  A lot of owners will likely face it at some point in time, so it’s best to educate yourself on it before it happens so that you can be prepared enough to ensure their safety throughout the whole process.

How They Adapt Against Predators

Leopard geckos will do a few different things when it comes to dealing with predators, but the one thing they commonly do that many people are familiar with is drop their tail.  You might be wondering what dropping their tail does for keeping predators away, but it actually acts as a distraction when they’re trying to get away.

I’m not entirely sure how successful they are with evading predators by doing this, but if it didn’t work, they wouldn’t be doing it.  So apparently, it’s a useful defense mechanism that they’ve been doing for a very long time that helps them stay alive.

Unlike other body parts, their tail can actually regenerate.  But because their first tail is so unique, the second one won’t look nearly as cool as the first one did.  That’s okay, though, because leopard geckos are still cute regardless.

Another behavior they display when on the defense is auditorial threats.  This means that they will hiss, “bark” and will even sometimes bite, even if the predator is way bigger than them.  They’re small and their tiny bites might not be very painful to us, but when it comes to smaller animals in the wild, I’m sure they are much more effective.

How They Adapt at Night

Because leopard geckos do most of their hunting at night, it’s very important that they’re utilizing the right senses in order to not only catch and spot their prey but to avoid becoming prey themselves while they’re out there.

If you haven’t checked out my article on the 20 random facts about leopard geckos, then I would recommend taking a look at it here.  In that post, I explained how good of eyesight they have.  It’s so good that they can actually see color at night when there’s no light.

This is amazing because this allows them to see their prey before being spotted and ensures their safety by making them aware of their surroundings.  Because of this ability, many people have said that they don’t need light in order to survive or even to catch their food while in the tank.

Sure, while in the wild they can rely on the moonlight to pave the way for them when walking around for their next meal, but some of those insects and lizards are very small and hard to spot, so their great eyesight helps them out tremendously with making sure they get to their prey and fill their bellies before calling it a night.

Does that mean that leopard geckos shouldn’t have light whatsoever?  No, I don’t personally believe this.  But, what I do believe is that they don’t need a lamp for their source of light as they will likely get most of it naturally just from the sunbeams that shine into the room during the day.

If your leopard gecko is enclosed in a very dark part of the house, though, and they never ever see the light of day, then, in that case, I would definitely recommend getting either UVB light or a heat lamp.

They’re very adaptive when it comes to maneuvering without any light, but in the wild, they at least get it from the sun, so we’ll want to recreate that for them as much as possible if they are in a dark room with no windows.  In situations like these, this is when I would recommend a UVB light.  It provides them with a bright light source during the day and also supplements them with vitamin D3, an important supplement that they need in order to survive. 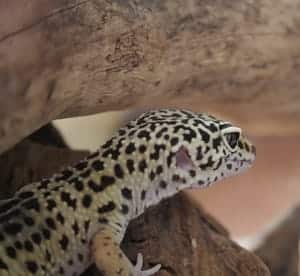 All in all, leopard geckos are very adaptive pets.  They can withstand pretty harsh and uncomfortable situations, but they don’t like pushing their limits.  They’re desert creatures that are used to hiding from the heat of the day and then coming out and hunting at night, so they’ve adapted quite well over time.

Because they’ve adapted so much to this particular environment, it’s very important that we mimic this same kind of habitat while in captivity as well.  Leopard geckos do not know the difference between being in captivity and being in the wild, so having equipment that looks just like what they’re used to works just fine in providing them with what they need in order to survive.

Not living in a habitat that they’re used to will cause them a great amount of stress and as a result, they will display it in their behavior.  If you’re a leopard gecko owner or plan to be, then it’s best to always get them the right equipment so that they can feel like they’ve never left their natural environment and also so that they can live in what they’re used to being adapted to.