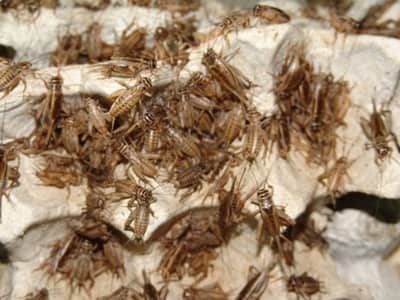 When it comes to a leopard geckos diet, crickets are one of the most commonly fed insects that are given to them when it’s time for them to eat.   And even though this might be true, that doesn’t necessarily mean that they should be left in the cage for extended periods of time.  While doing this may be convenient for owners, it might not be for our leopard geckos and here’s why.

Can you leave crickets in a leopard gecko cage?  No, you can’t.  When left in the tank for an extended period of time, crickets are liable to bite your gecko, stress your gecko out, and also die in hard to reach places within the tank causing your cage to stink as a result.

Crickets are a great source of nutrition for any leopard gecko, but because they do pose a threat to your gecko’s wellbeing, it’s not safe to leave them in the tank after your gecko has shown no interest in wanting to eat them.  Despite their size and how harmless they may seem, they aren’t insects that should be taken lightly.  If you’d like to know exactly why that is, read on.

Their Bites Are Extremely Harmful 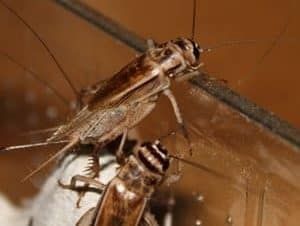 Crickets may be tiny and have tiny teeth to go along with that, but in comparison to the size of your leopard gecko, they’re really not all that tiny.  In fact, they’re even big enough to cause your leopard gecko pretty serious harm.

The reason for that is because despite how small the cricket is, their bites actually pack a pretty big punch once they’ve sunk into your leopard gecko’s fairly soft skin.

It’s not because their bites are big, because they’re actually pretty small, but it’s because once they’ve bitten your leopard gecko, it leaves your gecko at risk of potentially contracting an infection due to constantly coming in contact with bacteria that lingers all throughout the tank.

When that happens, these bites create small incisions in your leopard gecko’s skin and because there is fecal matter and urate particles on almost every surface that your leopard gecko comes in contact with on a daily basis, them catching a bacterial infection isn’t just possible, but it’s likely as well.

If you can somehow visualize yourself as a leopard gecko amongst many small and jumpy crickets hopping around all over the place then you can kind of see how they’d become stressed out by these insects when they’re left in the tank.

They’re quick, they hop around a lot, and they’re able to nip at your gecko and bounce away fairly quickly without being caught and because of that, this makes things very stressful for your leopard gecko to deal with simply because they have nowhere they can go to get away from them and instead have to endure the pain until they’re removed from the tank.

Not only is this stressful for your leopard gecko because of the fact that they’re constantly having to fend off the crickets to avoid getting bit, but it’s also stressful because they have to continue fending them off while they’re doing other things that help maintain their health such as eating, drinking, and even sleeping.

If they’re constantly being bitten and harassed while they’re trying to do these things, this can cause them to become dehydrated, sleep-deprived, and potentially even starved because of the fact that they’re under so much stress from having to constantly put up with the crickets bad and annoying behavior.

In addition to that, stress also weakens a leopard geckos immune system.  So not only are they neglecting their health by not being able to do the essential things that any living organism needs to do in order to survive, but they’re also prone to falling ill because of the fact that their immune system is weakened from the ongoing pestering of the crickets.

One or two crickets will probably not be enough to cause your leopard gecko to reach this level of stress as your gecko will likely eat them before they let the crickets get them that point, but if there are many crickets in the tank at once, then this can be very overwhelming for your leopard gecko to have to deal with.

Stress is detrimental to a leopard geckos health, so knowing that alone should be enough of a reason to not place crickets into their tank unattended for long periods at a time. 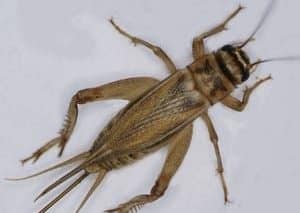 Unlike other commonly fed insects, crickets are great at finding places within the tank to hide because of the fact that they’re able to freely hop around the tank wherever they want.  And while this would be a good thing in a game of hide and seek, unfortunately, your leopard gecko doesn’t want to play.

And out of all of the feeder insects that leopard geckos are able to eat, crickets are one of the only ones who are able to do this and because of that, that’s what makes them so dangerous to have in the tank unsupervised.

Not only that, but when they get into these different hiding places, sometimes they never come back out because they get stuck and die and as a result, they make the tank smell bad because of the fact that they end up rotting when left unnoticed for an extended period of time.

A Better and Safer Option

Don’t get me wrong, I absolutely love crickets and they’re even a huge part of my leopard geckos diet.  But because there are a lot of cons to having them, I prefer dubia roaches instead.  Not only do they stink less than crickets, but they also don’t bite, they can’t hop, and they’re also easier for leopard geckos to catch because they don’t move very fast.

If you know me, you know that I recommend all owners feed their leopard geckos a variety of different foods so that they’re getting their nutrition from multiple different sources, but if I had to pick one insect over another, then I would definitely go with dubia roaches.

Not only are they unable to cause harm to your leopard gecko, but they’re also richer in protein as well.  Because both insects carry a similar amount of nutrition, a lot of owners end up replacing their crickets with dubia roaches altogether because of how less of a nuisance they are compared to them.

If you think you might be interested in doing the same, then click here to check out the dubia roaches that I get from Amazon.  I offer my leopard gecko both crickets and dubia because I like to offer variety in his diet, but if you’d like to just use dubia roaches only, then that’s totally fine.

Dubia roaches along with other insects can be left in the tank for longer amounts of time without having to worry about whether or not they’ll attack your leopard gecko, but when it comes to crickets, I suggest removing them immediately after your leopard gecko has finished eating as they do present a real threat to their overall wellbeing.

If you decide that you want to stick with crickets, just make sure to keep that in mind so that your leopard gecko isn’t subjected to enduring any of the things that I’ve listed above.  Crickets that have been left in the tank have harmed leopard geckos in the past and if you don’t remove yours after feeding, then your leopard will likely meet the same fate. 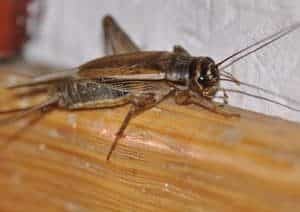 Crickets are awesome insects to feed to leopard geckos and one of the most commonly kept feeders as well, but the truth is that caring for them and feeding them to our geckos has a lot of downfalls.

Insects like wax worms, hornworms, mealworms, or any other kind of worm that can be fed to leopard geckos can be left in the tank for long periods of time without worrying about whether or not they’ll cause harm to our leopard geckos.

But because crickets are so vicious when they get hungry, leaving them in there is not a good idea at all.  Some people will recommend it but because they’re capable of inflicting so much physical and emotional damage to our geckos, it isn’t worth the risk.

I’m not knocking crickets because they’re very nutritious, but facts are facts and despite what anyone says, they can be very dangerous if left alone with your gecko for too long.