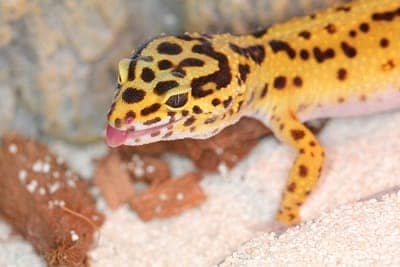 When it comes to a leopard geckos health, sometimes it can be hard to tell what’s going on with them when something is wrong as there are many different culprits to many different things that they go through.  But, when it comes to difficulties with how they’re breathing, there is usually almost always one reason for why it is the way that it is and here’s why.

Why is my leopard gecko breathing fast?  They’re likely breathing this way because of a respiratory infection.  The cause of this infection is usually due to low temperatures in the tank amongst a few other culprits that make it harder for their bodies to function properly.

Unfortunately, respiratory infections are common amongst leopard geckos but with the right care, they can be treated.  In order for them to properly recover though, you must take care of them in a timely manner so that the infection doesn’t get too bad and potentially cause death for your leopard gecko.  If you’d like to know how to treat and prevent this infection from happening, read on. 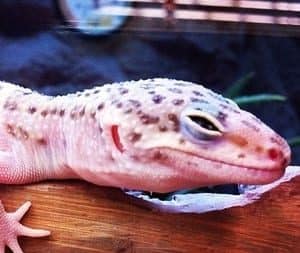 To avoid making assumptions, you’ll first want to check for a handful of signs before coming to the conclusion that your leopard gecko is, in fact, suffering from a respiratory infection.

As stated before, a lot of behaviors that they show could indicate one thing but they could also indicate another as well, so in order to really know what your leopard gecko is going through, it’s best to keep a lookout for multiple different symptoms and put them together to see if they match the signs and symptoms of a respiratory infection.

The way to do this is simple.  All you’ll have to do is pay close attention to them while they’re in their tank and while holding them to help you come to your conclusion faster.  With that said, here are some of the things you should be looking out for according to this source before taking any further steps:

If your leopard gecko has some or most of these symptoms, then chances are that they probably are in fact suffering from a respiratory infection.  While this may be worrisome, they can be treated from it with a little time, patience, and a few adjustments.

People at the most risk of this happening to them are new owners, but with the right knowledge, even they can avoid this issue.  Keep in mind that your leopard gecko doesn’t have to experience all of the symptoms that I mentioned above to have a respiratory infection.

While it’s possible that they can experience all of them at once, the one you’re most likely to see are the difficulties with their breathing seeing as these infections affect their nasal passage, throat, and lungs.

Because respiratory infections in leopard geckos are a lot of the time caused by low temperatures in the tank, we’ll start with the solution for that potential issue first.  If by some chance you’re not using a source of heat such as a heat mat or a heat lamp, then I suggest looking into getting one as soon as possible.

Heat is not only used for warmth, but it’s used for making sure that their bodies are working properly as well.  As I’ve stated before, without it, their bodies strain to do simple things such as walk, eat, and even breathe.

If by chance you don’t have a heat mat or heat lamp or the one you have is going out, then I recommend taking a look at this one here from Amazon.  It’s the one I use for my 20-gallon tank and has been very reliable for me for many years.

In addition to that, you’ll also want a thermostat to ensure that the temperature from your heat mat or heat lamp isn’t getting too high and also that you have a thermometer to track the temperatures as well.

If your leopard gecko hasn’t been subjected to the cold for too long and you’re noticing breathing issues, then turning the heat up to the temperatures they’re supposed to be at may be enough to fix their issue by restoring heat back into their bodies.

If after about an hour of having the heat on though and there’s no improvement in your leopard gecko’s health, then I recommend contacting your closest veterinarian straight away.  Once they catch these infections, they will deteriorate pretty quickly, so don’t wait and get them seen as soon as possible.

Also, if heat isn’t an issue for your leopard gecko and you know this for a fact by checking your heat mat and thermometer regularly, then another culprit could be high humidity.  Humidity is good for leopard geckos when they are shedding as it provides them with the moisture that they need in order to successfully get off their shed without any problems.

But, if there is too much humidity, then this can also cause difficulties with their breathing.  This shouldn’t be a problem for most people, but if you live in a hot environment where it rains often, then this is something that you can expect to or already do experience on a pretty frequent basis.

In order to lower your humidity levels, you’ll need a dehumidifier.  Leopard geckos can live in conditions with high humidity for a short amount of time, but because they aren’t tropical animals, it can cause them harm if they are subjected to it for too long.

With that said, I suggest looking into getting a dehumidifier.  Your tank’s humidity is directly affected by the humidity in the room in which it’s staying in.  So, by having a dehumidifier plugged up, you’ll not only improve the quality of your breathing, but you’ll ensure that your leopard gecko is staying in safe humidity ranges as well.

In addition to that, removing moisture-holding substrates and replacing them with solid substrates such as tile or rock slate will help keep the humidity down as well.  If you have a humidity gauge (which all leopard geckos owners should), then the percentage it should always read is 30%-40% at all times.

Anything higher or lower than that may put your leopard gecko at risk of experiencing issues with their breathing.  For a good hygrometer or monitor for the humidity levels in your tank, check this one out here.

Again, if your leopard gecko has been subjected to high humidity for too long and lowering it doesn’t resolve their breathing issues within an hour or so, contact your vet.  Also, for more important information on where your temperatures should be at, take a look at this article that I’ve put together.

Low temperatures and high humidity are two very common culprits for why your leopard gecko could be feeling the way that they are.  So, if they haven’t been exposed to either for too long, hopefully fixing these two issues will give you a resolution to your leopard gecko’s breathing difficulties.

If you catch your leopard gecko breathing heavily, then just know that it is unusual behavior.  Sometimes, heavy breathing doesn’t always equal to respiratory infections, but if they’ve been exposed to high humidity or low temperatures for a decent amount of time, then the chances of them having one are pretty high.

You’ll want to frequently check your outlets to make sure your heat mat or heat lamp isn’t plugged into a socket that doesn’t work and you’ll also want to make sure that you’re not creating too much humidity in your tank by spraying water into it too often.

As for the humidity outside of the tank, you will need a dehumidifier to help get it down.  Hot and wet states are prone to high levels of humidity at any given time of the year so having something to lower it will be just what you need to keep the humidity in your tank down as well.

Lastly, you will need to make sure you have a source of heat.  I’m sure many owners know that leopard geckos need heat, but if you don’t, then get one as soon as possible.  Leopard geckos need heat in order to function, and without it, you’re putting them at risk of catching an infection.