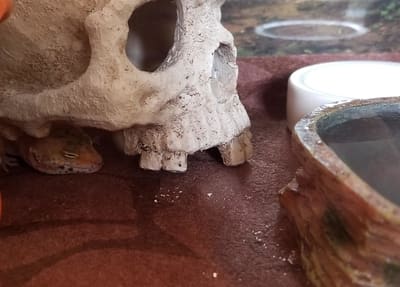 I would start this article off by saying how scary it is for an owner to experience a leopard gecko that isn’t eating or drinking, but because you’ve searched it up, you probably already know how it feels.  Leopard geckos need food and water in order to survive and when they’re not getting it, the worry for us owners starts to set in quick.  To ease your mind though, here’s the answer.

Believe it or not, there are owners out there who have owned their leopard geckos for many years and haven’t seen them drink a single drop.  But if your leopard gecko is acting normal, eating whenever you feed them and growing without any issues, then it’s likely that they’re doing just fine.  If you’re still concerned about their wellbeing though, here are some other potential reasons.

1. Not Used to Their Surroundings

If by chance you’ve just purchased your gecko or have switched them into a new tank any time recently then it’s very likely and almost guaranteed that they are not used to their surroundings yet.

Leopard geckos who have been put in places where they’re absolutely unfamiliar with will, in fact, take some time before they start feeling comfortable enough to interact with and explore the things within their new tank.

When this happens, unfortunately, there is not much you can do about it besides give them their time and space to get used to everything.  Leopard geckos are animals that can sometimes be very skittish and paranoid when they don’t know where they are or who’s around them, so just remember to be patient with them as they warm up to their surroundings.

Also, while they’re getting used to everything, try not to bother them too much unless you absolutely have to.  It can be hard enough for a leopard gecko to come out and drink from their bowl or do almost anything for that matter when first put into a new environment, so by giving them their space, you’re allowing them to build up the courage to come out and explore a little bit.

2. Getting What’s Needed Through Food

Despite how dry insects may seem, a lot of them actually pack enough moisture to provide your leopard gecko with enough what they need without having to drink too often from their water bowl.  There are some insects that hold more moisture than others, but if you’re wanting to know which ones hold the most, then look out for hornworms, crickets, and dubia roaches.

If you really suspect that your leopard gecko is not drinking their water, which they probably are, getting some of these bugs and feeding them to your gecko will be enough for giving them what’s needed for staying hydrated.

In order to find where to get these insects, check out this page here.  That page includes all of the insects that I feed to my leopard gecko and is a source for any other owners out there that would like to start offering their leopard geckos more of a variety in their diet as well.

Different insects are used for different purposes and they all have their own unique nutritional value, so if you’re looking for insects specifically for hydrating your leopard gecko if you fear that they may be dehydrated and they’re not drinking, then those three bugs are the bugs that you’ll want to look into getting.

Also, as a disclaimer, there are other bugs that carry quite a bit of moisture as well but because they’re so rich in fat, those bugs should only be given to your leopard gecko as treats or in emergency situations where they just won’t eat.  That said, just be mindful of that before choosing which bugs you want to get for your leopard gecko.

3. Prefer Water in a Different Form

Because some leopard geckos are picky, getting them to eat, drink, or use certain pieces of equipment in the tank can be quite the challenge until they’re given exactly what they want.  For example, if you have 2 perfectly good and expensive hides but your leopard gecko only wants to use the one that you made at home out of Tupperware then you may be dealing with a picky leopard gecko.

Of course, there’s no way to tell what they’ll like before trying it on them so, in order to know for sure, you’ll have to get it and see if it works.  This goes for insects, hides, and even their source of water.

With that being said, if you’re at your wits end with trying to get them to drink and you’re willing to experiment a little bit in order to do so, then check out this misting system here from Amazon.

Misting systems are great for leopard geckos that don’t seem to want to touch their water bowl because they spray the walls of the tank and since leopard geckos have adapted to drinking their water off of rocks and other objects in the wild, the majority of the time, the leopard gecko will lick the droplets off of the glass in order to quench their thirst as this is how they would usually get it if they were out in the wild in their natural habitat.

Since leopard geckos come from an environment where they’ve had to fulfill most of their hydrational needs from insects and licking morning dew off the rocks, it only makes sense that some of them prefer drinking their water like this opposed to drinking it from a bowl.

It’s still water and it all tastes the same but in a leopard geckos eyes, it’s a lot more appealing than the water that’s sitting in the bowl.  Just remember that before you mist their tank, be very mindful of how high the humidity gets after you’ve done it.

Because it can raise fairly easily, it’s best to just have the sprayer aimed at one side of the tank and also set to only spray once at night so that too much humidity isn’t created within the tank throughout the duration of the time that they’re up.

Too much humidity can cause your leopard gecko issues with their wellbeing, so be very mindful of that before doing so.  It’s normal for it to rise after spraying your tank and it’ll go back down after a certain amount of time but if your tank is constantly being sprayed, then it might not have a chance to go down and your leopard gecko may suffer as a result.

4. Drinking From Their Moist Hides

Moist hides are meant to be used primarily for shedding but because they also hold a lot of water due to the condensation that’s created from your heat mat or heat lamp, leopard geckos will a lot of the time go in them and drink the water out of there instead.

For those who haven’t seen their leopard gecko drink water in years, this is likely the reason why.  Not only are they getting their water from insects, but they’re also able to get it from their humid hide as well.  So between using the two, the water bowl might not get used much at all.

Again, if your leopard gecko looks healthy and is acting fine, then nine times out of ten they’re getting their source of water from somewhere else.  Leopard geckos can go quite some time without food, but when it comes to water, they need that in their systems a lot more frequently or else they will, in fact, become dehydrated. 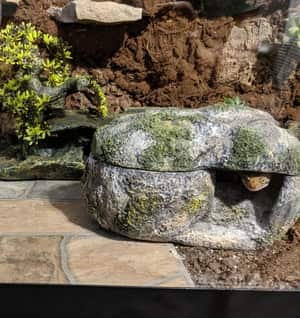 As owners, we overestimate just how much water leopard geckos actually need in order to stay hydrated but because leopard geckos are so small, they don’t need a lot of it to fully feel replenished.

Whether your leopard gecko is getting their water from insects, their moist hide, or their bowl, they’re likely getting it from somewhere and is something that you shouldn’t worry too much about.  Leopard geckos know when they’re thirsty just like they know when they need calcium or food, so when they need a drink, they’ll definitely get it.

If you suspect that your leopard gecko really isn’t drinking, then misting the tank and providing them with insects that are rich in moisture might just do the trick for giving them what they need to start.

Luckily, leopard geckos can’t go too long without water, so it’s only a matter of time before they drink it whether you catch them in the act or not.  If they’re eating, they look nice and fit, and they’re behaving like nothing is wrong with them, then chances are that nothing is, in fact, wrong with them.

Just remember to relax and know that if you’re taking care of your gecko the way you’re supposed to, they’re drinking just fine.