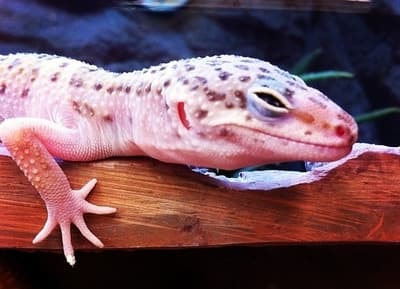 Spotting my leopard gecko sleep with one eye open is not something that I can say I’ve ever experienced before, but apparently, many other owners have.  Should you be worried?  Absolutely not, because apparently, it’s fairly common.  I have yet to know why they do this, but in order to give you the answer you’re looking for, I decided to go and find out.  Here’s why they do it.

Unlike some other geckos, leopard geckos have eyelids that allow them to shut and keep their eyes lubricated while they are asleep.  Because they’re able to do this, there’s no reason why they should have their eyes open unless something within or outside of the tank has alarmed them enough to open them.  With that said, read on to learn more about why they do this in their sleep. 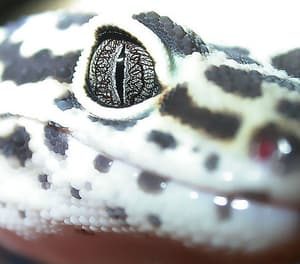 Most animals act on instinct, so when you catch your lizard with one of their eyes open while they’re sleeping, then it’s likely that they’re just reacting to something that has happened or happening around them.

The reason for this is simple.  Just like humans and almost every other animal on this plant, leopard geckos have adapted certain traits in order to ensure their survival.  When they hear a noise or suspect that a threat is nearby, they act accordingly so that they can get out of harm’s way if they need to.

While they are defensive and alert when it comes to potential threats, they don’t go as far as sleeping with one eye open, but they will wake from their sleep and look around if they in any way feel that they could be in danger.

There are a lot of reasons to be concerned whenever our leopard geckos start displaying a new behavior, but this isn’t one of them that should cause too much worry and is completely normal and something that many owners have and will continue to experience with their lizards for as long as they’re household pets.

If you spot your leopard gecko doing it, then more than likely they’re reacting to a noise that was loud enough to cause them to wake up from their sleep.  Leopard geckos are small, so they have to be alert and attentive at all times to make sure they don’t end up another predators lunch.

If they’re in captivity, threats are something that they don’t have to worry about too much.  But, because they are hardwired to survive just like we are, they will always react whether they’re under attack or not.

This behavior is completely normal and for any owner that has yet to experience it more than likely will within time.

How to Minimize the Noise

As much as we want to be respectful to our leopard geckos while they’re sleeping, not making noise throughout the day while they are is nearly impossible.  The reason for this is because not only are we making noise, but our pets, kids, and family members are making noise as well.

And because leopard geckos are crepuscular, that means that while we’re up and active, they’re getting their sleep.  While it’s difficult to eliminate noise from the house completely, there are creatives ways you can minimize the volume of the noise for your leopard gecko as much as possible so that their sleep isn’t overly interrupted.

With that said, I recommend checking out these soundproof panels here over on Amazon.  Placing these in the room that your leopard gecko is in won’t eliminate outside noises completely, but it will soften loudness of the noises so that they’re able to sleep in peace a little bit more.

They can come in handy for if you have company over often, children in the house, or for other pets that tend to make a lot more noise.  They can also be useful for noises made within the room as well.

To get the most out of them, place a few panels throughout the room and then cut and place a few more on the back and sides of the tank so that noise is absorbed before it hits the enclosure.  Most soundproof panels are made from foam, so cutting them to your liking depending on the size of your enclosure is something that is very possible.

I’ve personally never had to place soundproof panels in my home, but there are owners who have done it with much success.  Minimizing the amount of noise isn’t only good for ensuring they’re getting the rest they need to function properly, but it lowers the amount they stress as well by not being woken up often from noises outside of the tank.

Because leopard geckos have to be alert when out in the wild, their sense of hearing has adapted to be more sensitive so that they can hear predators sneaking up on them along with prey that they might want to go after on their hunt for food as well.

Not only that, but it can help with how they interact with you as well while in captivity.  To learn more about the advantages and disadvantages of them having sensitive hearing, click here to go to the article I wrote on how sensitive their hearing is to get a better understanding of how it works and how it can benefit them even in captivity.

The Effects of Lost Sleep 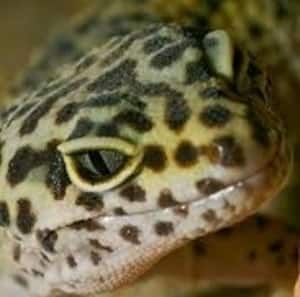 Just like us, leopard geckos need their sleep.  If they don’t get it, they can’t function at tip-top shape and might even become ill because of it.  You may be thinking how exactly a leopard gecko could become ill from not getting enough sleep, but it’s actually quite simple.

Waking up occasionally during their sleep cycle isn’t something that should be a cause for concern as long as it’s not too often and brief, but if they lose large amounts of it, their immune system becomes weak and as a result, they become more prone to certain deadly diseases such as crypto.

Not leopard geckos carry this particular disease, but ones who do could carry it for long periods of time and never get sick from it until their immune system is weakened due to large amounts of stress, which can come from not getting enough sleep.

In addition to that, they also might become different in behavior as well.  You might notice that they’re not eating as much, becoming a little more aggressive, and also acting overall a little more off than they usually would because of inadequate amounts of sleep.

Here are some other signs that they might display when sleep-deprived:

So as you can see, sleep is very important to a leopard gecko.  Opening an eye during sleep might seem harmless and it usually is, but if it happens too much, they may not be getting the rest that they need.  It’s not something that you should be worried about, but if you have a noisy home, then maybe considering figuring out a way to lower the noise would be a good idea for their health and overall wellbeing.

And because of their sensitive hearing, noises that are made while they are asleep are a lot more likely to wake them up than it would us.  So before you decide to turn the music up loud or do anything else that would produce a loud noise, keep this in mind.

A restful slumber for your leopard geckos equates to less stress and less stress equates to a happy and healthy leopard gecko, so be as mindful as possible or set up some soundproof panels on or near the tank to soften the blow of any noises that are made within and outside of the home.

Because leopard geckos have a sensitive sense of hearing, they are naturally lighter sleepers than some other commonly owned household pets.  If getting soundproof panels isn’t an option, try moving your setup in a room in your house that is much quieter and away from loud noises so that they aren’t losing any sleep.

If you know what’s it like to not get enough sleep through the night and then have to wake up and go to work or school then that should kind of give you an idea of what a leopard gecko feels like whenever they don’t get enough rest.

So whether that be relocating your leopard gecko, surrounding the tank with soundproof panels, or rehoming them due to too many noises being created in the house on a daily basis, we as owners should do any and everything we can to ensure that our leopard geckos are happy, healthy, and getting tons of sleep.

A lack of sleep causes a ton of stress and although stress is a nuisance to deal with for us, it’s much harder on a leopard geckos body whenever they have to deal with it.