It’s odd to see some of the many different behaviors that leopard geckos display, but at the same time, it’s also extremely fascinating.  Many of their behaviors have reasoning behind them and can be triggered due to certain stimuli, but when it comes to other behaviors, sometimes we’re left wondering what they mean and why they do it.  With that said, let’s see what the leopard gecko “stare” means.

Why does my leopard gecko stare at me?  They stare because they’re from an environment where they’ve had to stay on the lookout for prey and predators.  So, when they see anything making movements, they like to keep their eye on it to make sure it’s not a threat.

Aside from their cautious instinct to keep their eyes on you, they might also just be fascinated by your presence and enjoy watching you move throughout the room out of pure curiosity. Watching you move doesn’t stress them out or anything, but they’ll be sure to keep track of you until you stop moving.  With that said, though, let’s explore this behavior a little deeper. 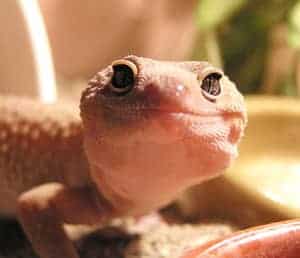 Although the fact that your leopard gecko is able to stare at you for long periods of time might be a little weird, it’s actually quite normal and is something that almost all gecko owners go through with their pets, even with those who aren’t leopard geckos.

Whenever it happens, some owners will stare back or walk around the room to see if they’ll continue to follow them just out of fascination.  Some have even said that their leopard gecko will stare at them for hours, which I guess could seem a little frightening if you’re in the room by yourself with all of the lights shut off (just kidding).

As stated above, there are a lot of different reasons for why a leopard gecko could be acting a certain way, but with this particular behavior, I really don’t think there’s any other reason besides what’s already been said.

Many owners love when they do it and actually find it to be very cute whenever they do catch their leopard gecko in the act of doing it.  So, if you were ever worried about whether or not this was a sign of something or that they’re scared, don’t be, it is completely normal and almost every leopard gecko will do it at some point.

Also, keep in mind that some leopard geckos will also stare whenever they’re hungry.  If you have a strong enough bond with your leopard gecko, they know that you are the one that provides them with food, so they’ll give you that stare to let you know that they want their little tummies filled.

Their Overall Attraction to Movement

Leopard geckos don’t only like to watch you move, but they like to watch other things move as well.  Again, this is probably linked to their predatorial instinct, but if there’s anything moving within their eyesight, chances are they’ll be keeping an eye on it, whether the object that’s moving is big or small.

The same goes for their food.  Even though they still get the same nutritional value from insects that are dead, they will simply not touch it unless it is moving.  If you do have a leopard gecko that doesn’t mind eating dead food, then you’re very lucky, because the majority of them won’t.

Moving objects just pique their curiosity and whether you’re prey or a predator, they’re staying on the lookout for a chance to attack a potential meal or to find a way to escape or defend themselves if they have to.

Going back to their food, though, if you’re anything like me when I was a new leopard gecko owner and made the mistake of thinking that they like eating insects that aren’t alive, then I highly suggest taking a look at this list of foods here that I put together.

I made the very costly mistake of buying a bunch of dead feeders without doing research just to find out that leopard geckos don’t like them, and if I did it, I’m sure others will, too.  So, if you’re a new leopard gecko owner and you’re at that point where you’re still trying to figure out what they like, make sure to always make sure it is live and not dead.

They are naturally attracted to movement, so buying live food will give you a lot more success with getting your leopard gecko to eat.

Each Gecko Is Different 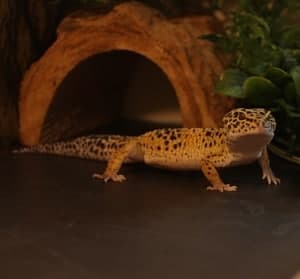 Just so you don’t think that your leopard gecko is not normal, please realize that not all leopard geckos will display the same type of behavior.  While one gecko will stare at their owners, others won’t.  They do have reptilian brains, but their personalities can slightly differ depending on various different factors.

So, with that said, what could be considered “normal” for one leopard gecko doesn’t necessarily mean that it’s normal for another.  While many people can relate to the leopard gecko stare, others can’t.  From what I’ve personally seen, though, and what others have seen as well, the stare is a very common behavior and is something you can expect.

The reason why I bring this up is because I want to let you know that if your leopard gecko isn’t displaying this particular type of behavior, it doesn’t mean that they’re any different than the next gecko.  While this wouldn’t bother most people, it might be a little worrisome for leopard gecko owners that are newer to owning their pet.

New owners may think that because a leopard gecko isn’t displaying a certain behavior that others geckos they’ve seen are displaying means that there’s something wrong, but really, that isn’t the case at all when it comes to something like this.  The fact of the matter is that some will do it while others won’t.  So, if yours doesn’t, don’t be worried.  They’re just unique in their own way.

They Aren’t the Only Ones Who Do It

We know that all geckos can display this behavior regardless of if they’re leopard geckos or not, but what you may not have known is that geckos, in general, aren’t the only reptiles to give their owners that stare.

While doing a little research, I also found that owners of bearded dragons have experienced the same thing with their pet as well, and commonly occurring whenever entering a room.  So, if you ever thought this was just a leopard gecko thing, now you know it’s not.

Does that make leopard geckos any less unique?  Absolutely not.  But it is cool to know that other reptiles do it as well.  They all are predatorial and defensive animals, so I guess it makes complete sense that certain reptiles will display the same types of behaviors as another.

If you have a friend or know someone else that owns a reptile, ask them if they’ve ever experienced the “stare” before, because chances are they have.  It’s a cool, harmless, and interesting trait that seems to happen amongst many different types of reptiles and is something interesting to look at them do whenever you’re bored or just hanging out.

You might even be able to have a staring contest with them, but I think the chances of winning are more in their favor.  All kidding aside, though, just know that you’re not the only one who is experiencing this with your reptile.

There are millions of reptile owners across the globe who are going through it right now and even though they’re also probably wondering why their reptile is staring at them, they probably think it’s just as cute to watch the same way you and I do. 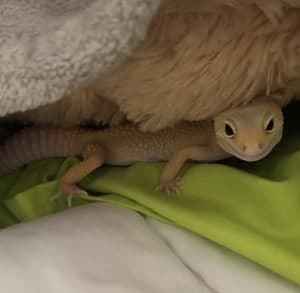 While many behaviors that leopard geckos show can cause concern and worry, others shouldn’t because really, some of them have no significant meaning behind them.  The leopard gecko stare is just something that they do and is quite frankly pretty cute and satisfying to watch.

So, if you have a gawking gecko, just admire them.  If anything, it means that they love you and like to watch you move around.  For people that leopard geckos don’t like so much, they will usually show signs of defense by hiding or even hissing if they feel threatened enough, so that’s another good sign that you’re loved.

If it’s late at night and they’re just getting up and haven’t eaten yet, then this could be another reason for why they’re looking at you.  All in all, there are various different reasons as to why they could be doing it, but luckily, none of the reasons are anything that should make anyone worry.

Reptiles owners from all walks of life experience this and aside from being an extremely adorable trait, it’s nothing that you should be alarmed about.  If they’re looking at you and it’s time for them to eat, then feed them.  If it seems that they want attention, then take them out of the tank and show them some love.

This isn’t guaranteed to stop them from staring at you, but is a start.  And with those unbelievably cute eyes, who would want them to stop staring anyway.