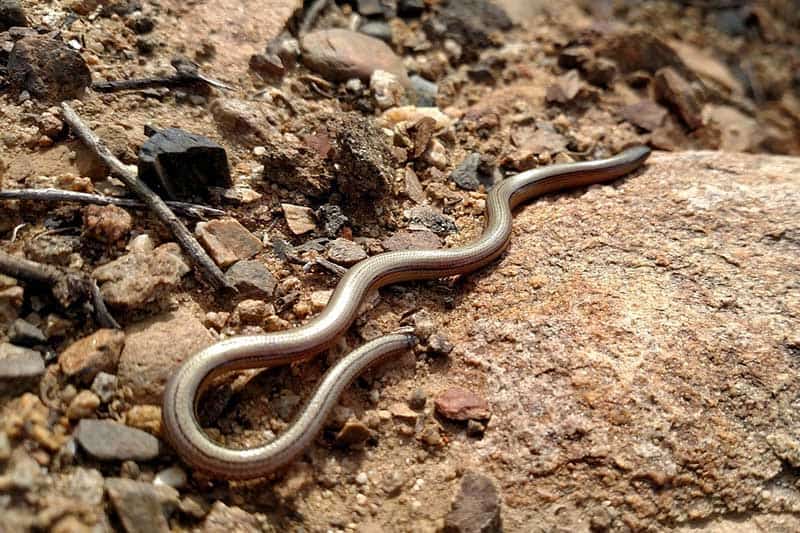 Lizards fall into a group of animals called reptiles. They are related to animals like turtles and tortoises, but are even more so closely related to snakes. In fact, snakes are thought to have evolved from lizards over 140 million years ago. It is no surprise that there are still several species of lizards that look like snakes.

Across the board, all snakes have no legs- however there are also some species of lizards that share this characteristic. At first glance, you may mistake some lizards for snakes. In this article, we will list several types of lizards that may be mistaken for snakes!

What’s the difference between snakes and lizards?

There are many different species of lizards and snakes, all of which are unique from each other. Lizards often share different natural histories or ecology from snakes and may eat different prey types, for one. For example, many lizards eat invertebrates while the majority of snakes do not.

However, there are some hard defining characteristics that make snakes and lizards different from each other. Obviously, the first one being that snakes have no legs while most lizards do. The other two traits are a little bit harder to pick out and require a closer look but are a surefire way to determine a lizard from a snake.

Glass lizards quickly come to mind when considering lizards that look like snakes. Eastern glass lizards are a type of legless lizard that can be found in the Southeastern United States. They range from the very southeastern tip of Virginia, all the way south down to Florida. These lizards are anywhere between 18 and 42 inches long, however most of this length is from their long tails. They tend to feed on mostly invertebrates, but have also been known to eat small mice.

This species was actually once thought to be a subspecies of the Eastern glass lizard. They overlap some of their range with the Eastern glass lizard and can be found in the Southeast of the United States as well as the Midwest. They are known for their extremely fragile, “glass-like” tail that they can detach or break off without it ever being touched.

Slow worms are not related to worms at all, but are in fact another lizard that resembles a snake. These lizards are widely distributed throughout Europe. They are fairly common, but can be hard to find due to their tendency to spend their time hidden under things or under ground.

The Collared delma is a type of legless lizard that is actually a type of gecko. They are native to a small part of Australia between New South Wales and Queensland, where they inhabit both forested and suburban areas. They get their name from the two to three rings on their head and neck.

The coppery grass lizard, aka transvaal grass lizard, is different from the others on this list because of the fact that it actually has tiny legs. However, you need to look closely to spot their limbs as they are disproportionately small to the rest of their body, and hardly look functional. These odd animals are native to Southern Africa.

Miriam’s skink is a type of legless skink that is endemic to a Northeastern province of Thailand. These skinks are often mistaken for a type of small, worm-like looking snakes called blind snakes. This lizard is actually named after the wife of an American herpetologist who collected the first specimen.

The Common scaly-foot is yet another snake-like lizard. It is native to Australia where it occupies the Southern and Eastern parts of the country. When threatened, they will stick out their tongue, likely in an attempt to mimic a snake. They feed on burrowing spiders, but in captivity they have also been known to eat other lizards and have been observed to have a preference for bananas.

The European legless lizard, also known as the Sheltopusik, which means “yellow-bellied” in Russian is definitely the largest lizard to make this list. They can grow to be up to 4.4 feet long, and are thick like a large snake would be. European legless lizards can be found in southern Europe and central Asia where they inhabit grasslands or sparse forests.

Asian glass lizards are found in parts of China, Laos, India, Myanmar, Thailand and Vietnam. They are a rusty brown color with vibrant, almost shiny bright blue stripes on their back. These lizards grow to be eight to 15 inches. Not much is known about their natural history, other than they are oviparous and lay eggs.

The Moroccan glass lizard, also called the Koelliker’s glass lizard, can be found in a variety of habitats throughout northern Morocco and Algeria. It lives in shrubland, temperate forests, grasslands, and even pasturelands. Interestingly enough, they only have small back legs but lack any front limbs.

This species is native to Florida, Georgia and southeastern South Carolina, and can be found on neighboring islands off the coast of the southeastern United States. They do well in drier, scrub-like habitats and eat small prey items like spiders and other invertebrates. They are quite secretive and not much is known about their population sizes or threats to their population.