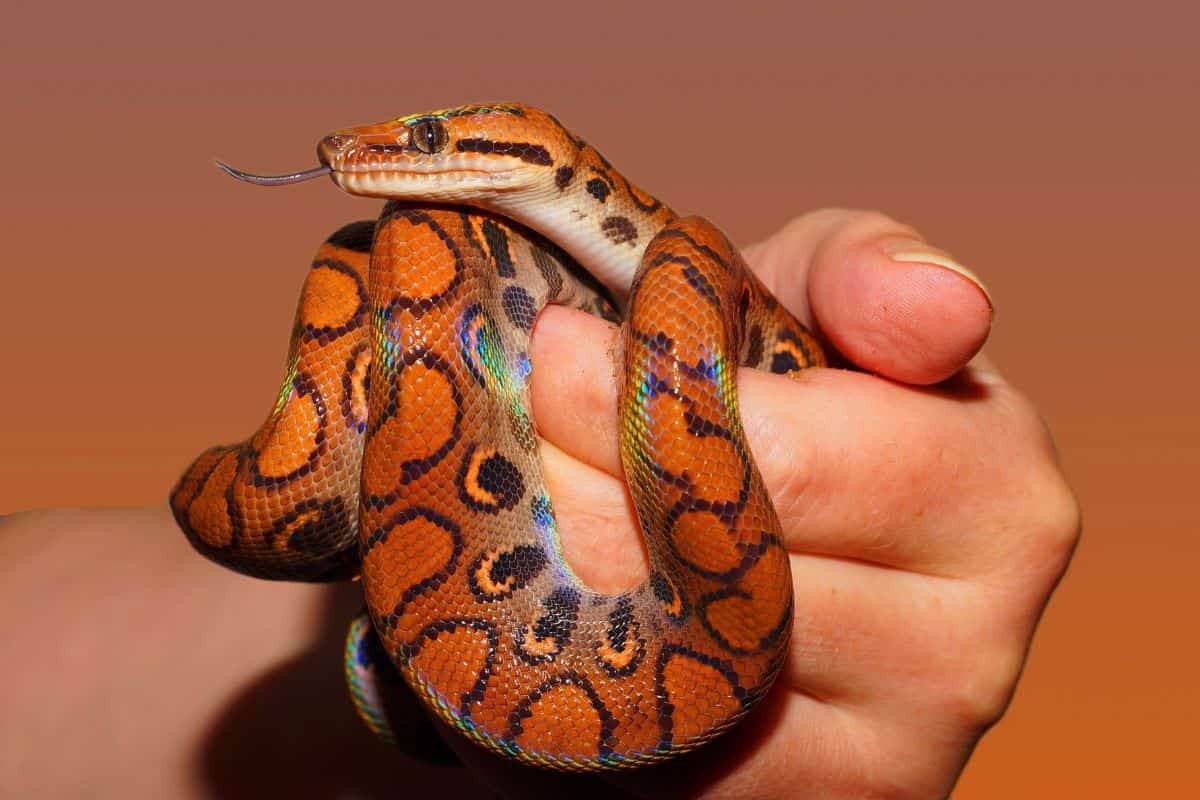 Although some people are intimidated by snakes, they are fascinating animals that can make great pets. Good beginner snake pets depend on their availability, how easy they are to feed, and their overall size for handling and taming. Having a smaller snake pet requires less space and often less maintenance to care for them in your home. If you’re curious about becoming a snake owner, here are 12 pet snakes that stay small for you to consider.

From a snake only 3 inches long to the smallest python species, learn more about these small snakes that could be your next pet.

The Barbados threadsnake is one of the smallest known snake species, with the largest specimen found reaching up to 4.1 inches. They are often described as being as wide as a spaghetti noodle. These nonvenomous snakes are native to the Caribbean islands, enjoy burrowing, and feed mainly on ant and termite eggs.

As their name suggests, these small snakes look like earthworms with brown, black, or grey backs. Their main diet is also earthworms, which they swallow alive.

They are active, wiggly snakes that enjoy burrowing and are harmless pets that do not bite. These snakes are native to the U.S., preferring cool, moist hardwood forest habitats.

The Brahminy snake, also known as the flowerpot snake, is another snake easily confused with large earthworms. They spend most of their time burrowing into the soil, feeding on termite and ant eggs and larvae as well as other soft-bodied anthropoids like centipedes, millipedes, and mites.

They are low-maintenance pets, completely harmless, and can thrive in enclosures as small as a gallon jar. Although originally from the tropics of Asia they’ve spread to other countries and can be found in Florida and Texas in the U.S.

Western hognose snakes have a unique appearance, with their upturned snout and stout body. As pets, they are generally docile and have excellent feeding responses.

They also rarely bite, preferring to strike opponents with a closed mouth when they feel threatened. You can easily care for them in a 20-gallon tank as long as there is some supplemental lighting. Males of this species is typically smaller than females.

If you want a pet python small enough that two adults could live in a 15-gallon tank, the anthill or pgymy python is the smallest python worldwide. As pets, they are typically easy to manage, quiet, and will rarely bite. They also aren’t known to be susceptible to any sicknesses or illnesses.

Although native to Australia, you can find these species confined bred in the U.S. For a small python species that is more widely available, consider the children’s python (Antaresia childreni) which averages 30 to 36 inches long.

As their name suggests, the African egg-eating snake diet consists exclusively of eggs and they require no whole animal prey. These snakes are non-venomous, have no front teeth, and are very easy to handle as pets.

With proper care, they can live between 10 to 15 years easily. Although males rarely grow above 20 inches long, females average around 24 to 40 inches but are still considered small compared to other snake species.

The ringneck snake is a popular beginner snake because of it’s range in the U.S and small size. It has a unique ring around its neck that looks like a collar and are often have bright yellow or orange undersides.

Although they have a weak venom in their saliva to paralyze their prey, they don’t have a venom gland and aren’t harmful to humans. However, do note they are secretive and shy snakes that hide during the day and are most active at night.

A beautifully colorful snake that stays small in both length and girth, you can easily house your Kenyan sand boa in a 10-gallon tank. They are commonly available to purchase as pets and generally have a passive personality and prefer not to bite, even though some individuals can be flighty. These small burrowing snakes are native to northeastern Africa and can live as pets for up to 20 years. 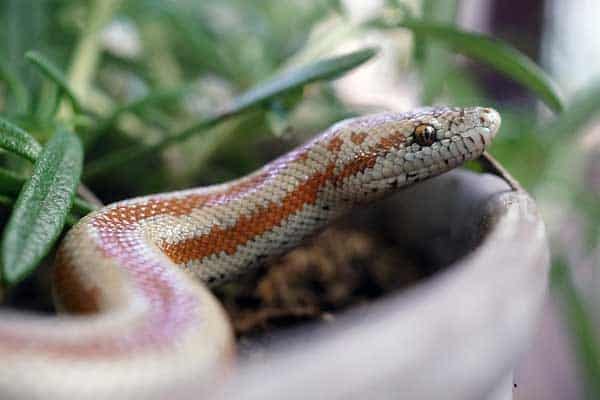 Rosy boas are low-maintenance pet snakes that are generally docile and have a gentle temperament. Although they have thicker bodies, they won’t grow more than 3 feet and can easily live in a 10-20 gallon tank.

With proper care, they can live up to 25 years. These snakes are nonvenomous and highly variable in color. However, they typically have three-colored stripes of brown, orange, and black running down their bodies.

Although brightly colored, scarlet kingsnakes are nonvenomous and use mimicry so that predators confuse them for the venomous coral snake. They use construction to kill their prey and feed on mice, lizards, and skinks.

However, make sure to divide two scarlet kingsnakes before Although they are easy to handle and make great peaceful pets that can be trained, they are known to bite if they feel threatened.

The short-headed garter snake is one of the smallest garter snake species. These snakes are nonvenomous and their diet consists mostly of earthworms.

They are also very active and alert, making great display snakes. They don’t do well at temperatures higher than 77°F and love soaking in a water dish. You may need a humidity box to prevent excessive dryness, especially among younger snakes.

Smooth green snakes are native to the northern portions of the U.S., preferring grassy habitats. Although they are easy to house and have an insect-based diet, these snakes don’t tolerate frequent handling well as pets. So, even though they rarely bite or show defensive behaviors when held, the experience can make them stressed and ill.