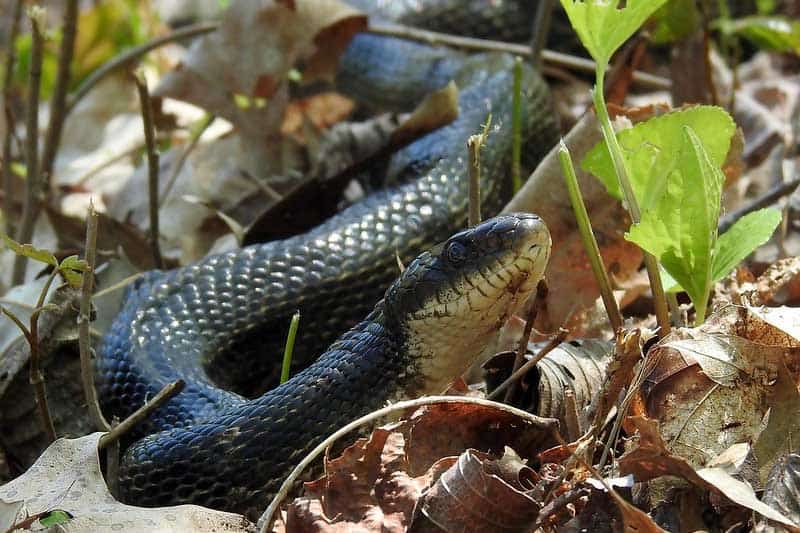 Aside from being residents to Georgia and other U.S. states, rat snakes are popular in the exotic pet trade. They’re nonvenomous, have simple care needs, and have a docile personality. Similar to many other types of snakes, rat snakes kill by constriction and are not a threat to humans. They have ways to appear more dangerous, but it’s all for show.

The 5 Different Species of Rat Snakes in Georgia

Having said that, let’s have a look at Georgia’s rat snakes!

The most popular species of rat snake in the US, the black rat snake, is commonly found in northern Georgia. They are shiny black in color with a white belly and faint hints of white between some scales. Although people commonly interchangeably call the black rat snake Eastern rat snakes, they are slightly different genetically and in color.

The black rat snake is one of the largest in North America, being able to grow up to 6 feet in size. During the colder months, black rat snakes will brumate, which is similar to hibernating. During brumation, the snakes are sleeping but still awake for activities such as drinking water.

The Eastern rat snake lives exclusively in the US along the southeastern coast. They are completely black on the back and sides, making them almost identical to the black rat snake. Eastern rat snakes have small keels on their scales, a white underbelly near their chin, and irregular black spots that turn solid gray near their tail.

Gray rat snakes are the most common rat snake species found in southern Georgia. People sometimes refer to them as “chicken snakes.” Animal control companies have reported gray rat snakes like to hide out in attics where it is warm and has rodents or birds.

Another name people call the red rat snake is the corn snake, which is one of the most popular pet snakes there are. They are one of Georgia’s smaller rat snake species, ranging from 1.5 to 3 feet in length. You can normally find them living in barns or other manmade structures.

Yellow rat snakes are often 3 to 6 feet in length and golden, olive, or yellow in color. They have golden irises, smooth white or yellow bellies, and four dark stripes running from head to tail. These stripes can be eye-catching or almost invisible.

As their name suggests, rat snakes eat rats. Most people who know they aren’t venomous see them as great pest control pets. They also eat birds, bird eggs, frogs, lizards, and other small rodents, such as mice, chipmunks, and voles.

Rat snakes will wait to ambush their prey before constricting them to death and swallowing them whole. Rat snakes are known to continue hunting after eating since they are covered in the prey’s scent and more likely to catch another meal.

4. Can Rat Snakes Climb and Swim?

Even without legs, rat snakes are efficient climbers. When hunting for bird eggs or small birds, they can easily climb tree trunks using only the bark. According to the Smithsonian National Zoological Park, rat snakes are great swimmers. The Everglades rat snake in Florida often swims away from predators.

5. How Do Rat Snakes Reproduce?

Rat snake breeding habits vary based on the species, however, they all lay eggs. The gray rat snake that can be found in Georgia will lay 12 to 20 eggs per clutch. All baby rat snakes will hatch after around two months and are independent, not receiving any parental care.

Rat snakes are non-venomous and are no threat to humans. However, they have a couple of tricks to appear scarier than they are. They can emit a foul odor that makes it appear like they are releasing poison. Rat snakes will also sometimes “rattle” their tail to make themselves appear venomous.