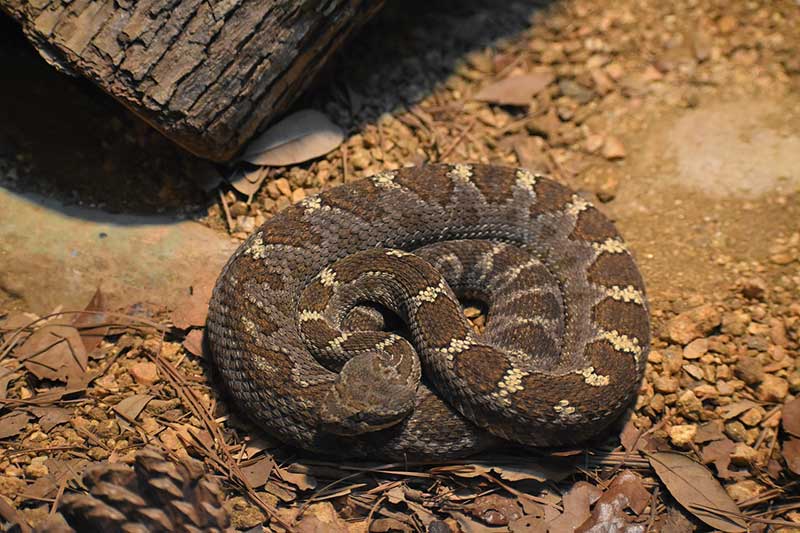 Georgia is the 24th largest state boasting 59,425 square miles. The state has 11 national parks which includes the Chattahoochee National Forest and its over 867k acres of untouched forest that spans across 26 of Georgia’s counties. Even though rattlesnakes tend to avoid urban areas, all of this wilderness can provide rattlesnakes with plenty of suitable habitats.

Anyway, let’s have a look at Georgia’s rattlesnakes!

3​ species of rattlesnake in Georgia

The pygmy rattlesnake can be found throughout most of Georgia, their range extends north almost to the Tennessee border. They’re gray in color with brown and orange markings down their backs. Pygmy rattlesnakes, named for their small size, are commonly thought to be one of the prettier rattlesnake species.

I​n stark contrast to the pygmy rattlesnake, the eastern diamondback is the largest of all rattlesnake species, and one of the heaviest venomous snakes in the western hemisphere. The coloration is very similar to the western diamond back, but a few shades darker. The distinctive diamond pattern on the back, plus its great size, gives this snake away.

You’ll find in Southern Georgia, in just about every kind of habitat. Rabbits are their favorite food, but they’ll also eat rats, and occasionally birds. It’s not a very aggressive species, but it’s massive size means it has very long fangs and produces a lot of venom, so bites are especially dangerous. In fact, it’s widely considered the most dangerous snake in North America.

Timber rattlesnakes are common throughout most of Georgia, with a few spotty areas where they aren’t found. Their range extends far up into the northeast, where the weather gets quite cold in the winter.

1. I​s it illegal to kill a rattlesnake in Georgia?

N​one of the rattlesnake species in Georgia are endangered, and if you encounter one you can legally kill it. We would urge you only to do this if you find one near your home where it presents a danger to your family and your pets, since rattlesnakes are an important part of the ecosystem, and the snakes living out in the wild aren’t a threat to you.

Also, please note that it is illegal to kill any non-venomous snakes in Georgia.

2. W​here do rattlesnakes live in Georgia?

Rattlesnakes live all throughout the state of Georgia, in every type of habitat. Some common rattlesnake habitats in Georgia might be forest, grasslands, swamps, or wetlands.

3. H​ow long do Georgia rattlesnakes get?

T​hat depends on the species. Pygmy rattlesnakes are only a couple of feet long at most, and they’re actually small enough that they don’t present much danger to humans. Timber rattlesnakes can be up to five feet long, which is quite large, but still not the biggest. Eastern diamondback rattlesnakes top out at nearly eight feet long, making them the largest of any rattlesnake species.

5. Can Georgia rattlesnakes kill you?

Georgia’s rattlesnakes can definitely deliver a lethal bite. Pygmy rattlesnakes may not be lethal to adults, but they could kill a child. Timber and eastern diamondback rattlesnakes are both potentially among the most dangerous snakes in the world, and either is fully capable of killing a human.

If you get bit by a rattlesnake in Georgia, seek medical help immediately.

6. I​s a rattlesnake more dangerous than a water moccasin?