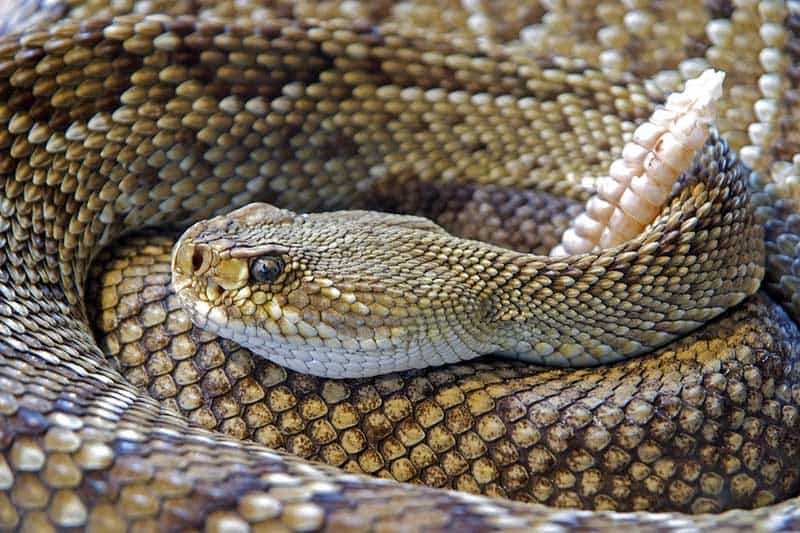 A variety of different rattlesnakes can be found throughout many parts of Texas, in different types of habitats. Neighboring Arizona has more than any other state with 14 species, you’ll find 9 in Texas. Most rattlesnakes all have many things in common such as the infamous rattles and their venom. However each species of rattlesnakes may prefer a slightly different diet or habitat. Some may even behave completely different from other rattlesnakes in Texas.

Area-wise, Texas is the second-largest state in the United States, behind Alaska. In Texas, rattlesnakes have 268,596.5 square miles, 3 different climate zones, and many different ecosystems to live in. Therefore, there’s no surprise that 9 different types of rattlesnakes can be found throughout the state!

Keep reading to learn about the 9 most common rattlesnakes that are in Texas, and where you can find them!

Western Diamondback Rattlesnakes are incredibly common venomous snakes in Texas. In fact, they’re thought to be the snake responsible for most snake bites in the United States! These rattlesnakes can be found throughout the southwest of the United States and into Mexico. In Texas, these snakes can be found throughout most of the state, other than the northern panhandle and East Texas.

Western Diamondback Rattlesnakes can live in a variety of different habitats, depending on what the temperature and terrain are like in their specific area. For the most part, they enjoy living in everything from rocky hillsides, flat plains, deserts, and forests.

Interestingly, Western Diamondback Rattlesnakes are considered to be one of the most aggressive types of snakes. Instead of fleeing when they are approached by a predator, these snakes will stand their ground, coil and rattle to warn off their enemies, and then strike if all else fails.

The Timber Rattlesnake has a very large range of states that it can be found in. This snake covers almost all of Eastern North America. In Texas, it’s mainly found in East Texas only.

These rattlesnakes tend to prefer living in habitats located in rugged terrains. Sometimes, this could be rocky ledges out in the open, other times it could be dense forests. Female rattlesnakes almost always prefer giving birth on open rocky ledges!

A Timber Rattlesnake’s diet mainly consists of small mammals, birds, frogs, and other snakes. These snakes actually prefer eating garter snakes! Plus, they’re considered to be one of the more dangerous snakes in the United States, as they are quite big, have long fangs, and have a high venom yield!

Banded Rock Rattlesnakes can be found throughout many states of Mexico. In the United States, they are mostly only found in Arizona, New Mexico, and Texas. In Texas, they tend to only be found in the western tip of the state.

These snakes are perhaps the least aggressive type of rattlesnake found on this list. Instead of rattling to warn off their predators, Banded Rock Rattlesnakes instead prefer to keep quiet and blend in with their rocky surroundings to keep themselves safe! They’re also incredibly shy and nocturnal, secretive creatures.

They almost always prefer to live in rocky habitats and often can be found in canyons. These snakes don’t travel far and will often die around the same area they lived their entire life. They mainly only eat lizards and rodents that they find in their territory, as they’ll never get too far from their rocky home!

While these snakes can be found throughout the southwestern United States, the Mottled Rock Rattlesnake can specifically be found in rocky areas of West Texas. These snakes prefer to live in rocky habitats and can often be found in man-made road cuts.

Mottled Rock Rattlesnakes are also not very aggressive when compared to other rattlesnakes on this list. Often, they won’t even rattle their tail, instead preferring to blend into their surroundings, unless they are physically attacked.

These snakes are also mostly nocturnal, and they can survive in colder weather more easily than other rattlesnakes. Their diet mainly consists of lizards, small mammals, and occasionally frogs.

The Black-Tailed Rattlesnake can be found throughout much of the southwest of the United States, and into Mexico. In Texas, these snakes are mainly only found in Central Texas and all of West Texas.

These rattlesnakes mainly prefer living in rocky or bushy habitats, though they can also be found in deserts, grasslands, and forests at high altitudes. Their diet mainly consists of small mammals, and these rattlesnakes specifically tend to eat rodents more than anything else.

Black-Tailed Rattlesnakes are only mainly nocturnal in the summer, as they’ll sleep during the day to beat the heat. In the spring and fall, they will change to a diurnal behavior. These rattlesnakes are also not very aggressive, mainly because they’re so curious, and don’t bite very often, as they’ll instead prefer to just rattle their tail or quickly get away!

The Mojave Rattlesnake is only found in parts of Texas, mainly only in the extreme west. These snakes can also be found in other western states, though they do encompass a lot of Mexico.

Mojave Rattlesnakes prefer living in desert habitats or regions that have low vegetation. They steer clear of dense vegetation, as they like open-air only.

Interestingly, the Mojave Rattlesnake is considered to have one of the world’s most potent venoms! While many have said that these rattlesnakes are aggressive, there actually isn’t much scientific documentation to confirm this. As with any rattlesnake, they will attack if provoked or physically attacked, though!

As these snakes can be found in so many different areas of North America, their habitats can vary depending on where they live. For the most part, these snakes prefer dry areas and a moderate amount of vegetation.

Their diet can also vary, though they mainly will just eat a variety of small mammals. These snakes also have a powerful venom, and they have no issues rattling their tail and striking when they need to defend themselves!

The Western Massasauga snake can be found in different states throughout the Midwest, though in Texas they’re mainly only concentrated in the northcentral region. They prefer living in grasslands, on rocky hillsides, or on the edge of some open forests or woodlands.

These rattlesnakes are mainly nocturnal throughout the year. However, they can occasionally be seen out sunning themselves during the day when it’s not too hot. During the hot summer months, they’ll sleep all day.

While these snakes rattle their tails just like all other rattlesnakes do, their rattle is oddly high pitched. This has given the Western Massasauga the nickname Buzztail, as a result!

The Desert Massasauga can be found throughout different southwest states of the U.S., though in Texas it’s mainly only found in West Texas. These snakes can especially be found in the Rio Grande Valley.

They tend to prefer rocky habitats that are arid or semiarid. However, they can also be found in desert grasslands, depending on their location. They also prefer to eat small mammals such as rodents, though they’ll also eat frogs and lizards.

The Desert Massasauga is also a mainly nocturnal snake. However, just like other rattlesnakes here, they do enjoy basking in the sun from time to time!