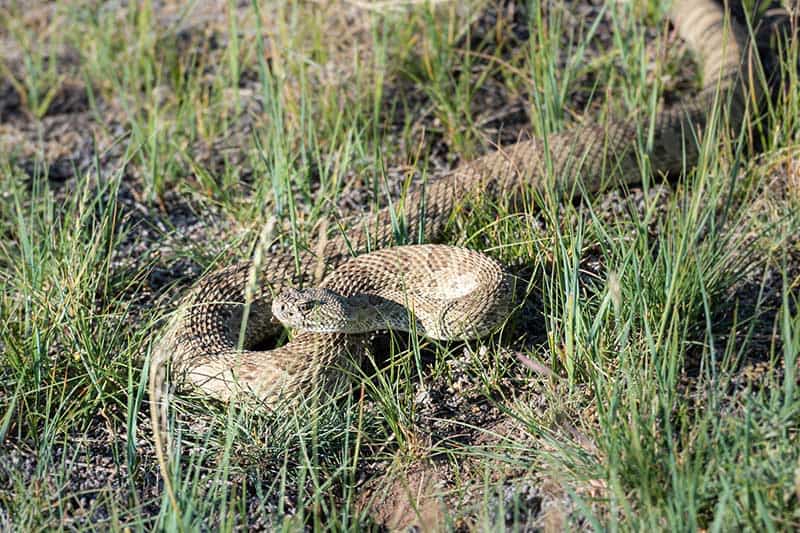 A variety of different rattlesnakes can be found throughout many parts of Utah, in different types of habitats. Nearby Arizona has more than any other state with 14 species, you’ll find 6 in Utah. Most rattlesnakes all have many things in common such as the infamous rattles and their venom. However each species of rattlesnakes may prefer a slightly different diet or habitat. Some may even behave completely different from other rattlesnakes in Utah.

Area-wise, Utah is the 13th largest state in the United States, after Minnesota. In Utah, rattlesnakes have 84,898 square miles, 4 different climate zones, and many different ecosystems to live in. Therefore, there’s no surprise that 6 different types of rattlesnakes can be found throughout the state!

Keep reading to learn about these rattlesnakes of Utah, and where you can find them!

The Mojave Rattlesnake is only found in the extreme southwest corner of Utah. These snakes can also be found in other western states, though they do encompass a lot of Mexico.

Mojave Rattlesnakes prefer living in desert habitats or regions that have low vegetation. They steer clear of dense vegetation, as they like open-air only.

Interestingly, the Mojave Rattlesnake is considered to have one of the world’s most potent venoms! While many have said that these rattlesnakes are aggressive, there actually isn’t much scientific documentation to confirm this. As with any rattlesnake, they will attack if provoked or physically attacked, though!

The Prairie Rattlesnake, sometimes called the great plains rattlesnake, can be found throughout many central states from Texas to Wyoming. They even can be found in parts of southern Canada all the way down to northern Mexico! In the United States, they can mainly be found throughout the Great Plains and much of the central U.S. In Utah, they occur in the eastern half of the state.

As these snakes can be found in so many different areas of North America, their habitats can vary depending on where they live. For the most part, these snakes prefer dry areas and a moderate amount of vegetation.

Their diet can also vary, though they mainly will just eat a variety of small mammals. These snakes also have a powerful venom, and they have no issues rattling their tail and striking when they need to defend themselves!

Subspecies of the northern pacific rattlesnake, these massive snakes are found in western Utah, where they like to dwell in grassy plains, agricultural areas and rocky hillsides. They have varying colors, depending on their habitat, but the back has dark blotches with lighter centers.

G​round squirrels and rabbits are favored prey items, which means these snakes are actually somewhat beneficial to farmers, as they eat animals that would otherwise damage the crops.

Common throughout the southwest, the speckled rattlesnake only occurs in extreme southwestern Utah. It has a light brown, tannish color with darker speckles throughout. Like most rattlesnakes, it’s primarily nocturnal and eats mainly rodents.

I​t thrives in desert regions, where it hunts lizards and birds in addition to rodents. It has some of the broadest color variations of any rattlesnake species, which can make identification in the field difficult.

Only found in extreme southeastern Utah, the Hopi rattlesnake is on the small side reaching just 15-24 inches as an adult. They look almost identical to the prairie rattlesnake, just smaller.

Another subspecies of the northern pacific, this small rattlesnake is found in the eastern half of Utah. They only reach around 2 feet in length as adults, but their venom is known to be among the most toxic of all venomous snakes in the United States.

They feed primarily on lizards and small vertebrates and can be found on rocky hillsides near river basins. This species is listed as having a high likelihood of extirpation in some nearby states.