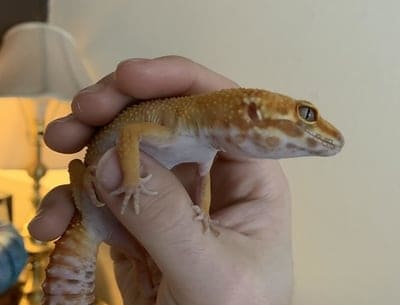 Leopard geckos can be just like children.  Once the bad behavior sets in, it can be very difficult trying to get them to behave as they are already set in their moody ways.  Also like children though, despite how old they get, they can change with enough time, patience, discipline, and love.  It will take some work, but if you’re up for the challenge, it can be done. Wondering how to tame an older leopard gecko?

Here’s how you do it.

If you’ve never attempted to tame your leopard gecko before then the chances of you successfully doing so are pretty high even if they are older. But, if you have already tried it, your chances of taming them are still high, but because each leopard gecko has their own personality, they may never be as tame as you want them to be. Let’s get into my top 5 ways of taming older geckos.

How to tame an older leopard gecko – 5 tips 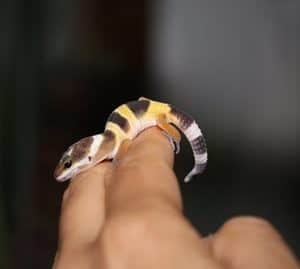 Have you ever heard the saying “patience is a virtue”?  If not, then it basically means that having patience is a very valuable quality to have about yourself, and when it comes to our leopard geckos, it’s a very important quality to not only have but to practice as well.

When taming them, you’ll want to always keep in mind that in order to make the process work, you must be patient.  A lot of owners who have the intention of training their leopard gecko think that it’s a quick and easy process, but in reality, it can actually be challenging and take quite a bit of time.

For younger leopard geckos, you can expect to be in the taming process for as little as 3 weeks all the way up to 6 weeks and sometimes even more.  But, when it comes to the older geckos, it may take a lot longer than this because as stated above, they’ve had time to become stuck in their ways and changing them to behave in a way that they’re not used to can be a little difficult.

We want our leopard geckos to show us that they love us just as much as we’re willing to show them, but because their brains are different than ours, it can take a little while to get them to come to that point.

You’ll want to be patient when feeding them, when they start to show aggressive behavior, when they don’t want to leave out of their hides and so on and so forth.

Just remember that this can take time and through the whole journey, you’ll have to be patient and not give up on them if you truly want them to become tame.

2. Get Closer to Them

This can be a little challenging depending on whether or not your leopard gecko will let you hold them, but if possible, you’ll want to try to put yourself in a large enclosure with them so that they can get used to being around you and over time realize that you’re not a threat.

As their owner, doing this shouldn’t stress them out too bad because despite their current behavior, they should still know who you are depending on how long you’ve had them.  But even if you haven’t owned them for very long, doing this for a few minutes a day won’t do much harm to them and with enough sessions, should even bring your leopard gecko to like you more.

For convenience purposes, I suggest getting your hands on a small playpen for larger animals so that you and your gecko can comfortably fit in it without being overly cramped, but if that’s not an option, then my second suggestion is to use your bathtub.

Bathtubs can be small and can be an odd place to try and tame your leopard gecko in, but it is an enclosed area and can work great if you’re not too big to fit into it.  If the bathtub just doesn’t cut it though, check this playpen on Amazon.

Sometimes, even those can be too small, but if you’re able to connect two or more together, it can give you plenty of space to comfortably sit in with your leopard gecko while they get used to you.

Not only will this give you time to bond with them, but it will also give them time out of their tank giving them a little bit more freedom.  Allowing them to get a little more space than what they’re used to is what I always recommend, so really, taming them this way is a win-win for everyone. 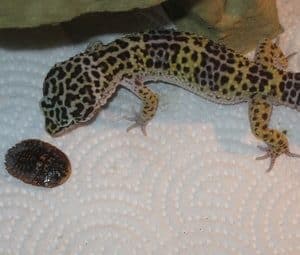 A lot of people keep their leopard geckos on a pretty strict diet, and while they don’t necessarily hate it, there’s so much more out there that can be given to them that can not only potentially get them to like you more, but will provide them with different vitamins and nutrients as well.

While you could get a leopard gecko to love you pretty fast by offering them a ton of fatty insects such as wax worms and butter worms, these insects can make them gain a ton of weight and should only be given to them as snacks because of how much fat they contain.

But, when offering them a variety of many different insects instead of just one or two of the same ones, this can get them to start to feel more inclined to interact with you in a nicer manner since you’ll be feeding them something new and that they’re not used to eating.

Leopard geckos don’t mind eating the same foods over and over again, but they definitely appreciate it when something new is brought to the table and if they start associating you with new and different foods, then this could help them ease up a bit and gain more trust in you as time goes by.

If you have your leopard gecko on a strict diet and you’d like to introduce new foods to them, then check out this page that I put together and see how much of a difference it makes in your bond with them.

4. Show Them You’re Not a Threat

This might be one of the more challenging things to do out of all the things listed in this article, but after giving them food, gently stroke the top of their head to let them know that you come in peace.  This doesn’t always work and might take a while before they allow you to do this without showing aggression, but if you’re giving them a variety of foods that they enjoy in their diet, they’ll be more likely to let you do it.

This will not only take tons of patience, but it will also take commitment and persistence as well.  Bad behaviors don’t change overnight, so if you’re really serious about getting them to become tamer, then you’ll have to stick this one out until they start to calm down and realize that you’re not some scary predator trying to come into their tank and attack them.

Just make sure that when you’re doing this to move very slowly.  Leopard geckos don’t like fast and sudden movements and will automatically think that you’re a predator if you approach them in such a way, so take your time when feeding them and also when touching them so that they aren’t alarmed by any fast and alerting movements.

5. Avoid Reaching from Above 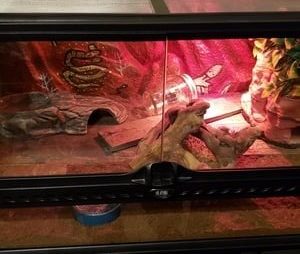 Reaching your hand in the tank from above can seem very harmless, but to a leopard gecko, it’s one of the scariest things in the world to experience.  This is not only scary for them, but it can make taming them down that much harder because they’ll think you’re a predator reaching down to grab them.

To completely avoid this issue, I suggest looking into a tank that opens up from the front.  Not only does a tank like that make it easier for them to trust you by allowing them to actually see you reach in instead of being spooked when reaching in from above, but it’s more convenient for you as well because you don’t have to worry about them attacking your hand every time you go to pick them up or feed them.

If this is something you’re interested in, then I recommend getting the same tank that I have here on Amazon so that you can make the taming process that much easier.

I recommend all leopard gecko owners have a tank like that because even geckos who highly trust their owners can get spooked when someone is reaching in from above, but when it comes to actually taming a gecko, I recommend it that much more.

There have been many instances where leopard geckos have attacked their owner by charging at or biting their hand whenever they would go to feed or handle them, so to avoid having this happen to you, I suggest checking out a tank that opens up from the front to further build that much-needed trust in order to calm them down.

No matter how old or young a leopard gecko is, many of them can be tamed.  But because they all have their own personalities, some of them may naturally stay aggressive for as long as you own them just because of who they are.

With enough patience and commitment though, you can get most of them to calm down at least a little bit even if they are grumpy by nature.