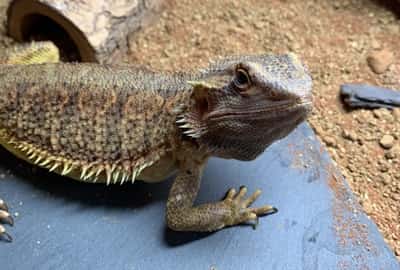 Let’s talk about dragons. No, not Eragon or Viserion, we’re talking about bearded dragons. Though their namesake suggests a large, fire-breathing creature, bearded dragons are only likened to the mythical creature because of their spiny, dragon-like skin. Despite their intimidating name though, beardies happen to be one of the most docile reptiles to own.  That said, let’s see why.

Despite their ominous name, Bearded dragons are incredibly friendly and have a great temperament. This docility is due to how they are bred. Any good beardie breeder knows that the best way to ensure a well mannered dragon is to socialize, socialize, socialize.

Not All Bearded Dragons Are Calm 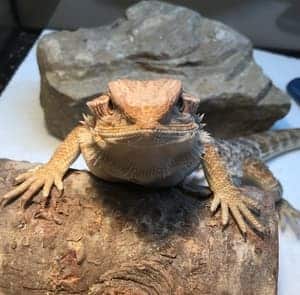 The most important thing to consider about a bearded dragon is its upbringing. The last thing you want to do is go out into the Australian outback, pick up the first beardie you see and take it home.

This would significantly increase your chances of interacting with a beardie that acts more like its namesake. While it will not breathe fire or terrorize your town, due to its lack of socialization, it is very likely to act aggressive towards you.

In fact, wild bearded dragons tend to be far more aggressive than their domesticated siblings. Types of aggressive behavior include hissing, biting, flaring of their throat, fast head movements, and flattening of their body.

Here Are Some Reasons Why Your Bearded Dragon Could Be Aggressive

One way to ensure a grumpy bearded dragon is forgetting to feed it. The best practice for feeding a beardie is just about every day. Each animal will have different eating habits, but if you stray from the feeding schedule your bearded dragon is used to, you can expect one angry reptile.

Additionally, though it is rare, your beardie may become aggressive if your hands smell like food! Be sure that if you are handling your dragon, you have clean hands to avoid any unwelcome nibbles.

Unfamiliarity is a common reason for aggression in bearded dragons, especially new ones. If you just picked up your beardie from a local breeder and are having some issues handling him/her, here are some things to consider.

Firstly, if your bearded dragon was acting perfectly fine around the breeder but is now acting skittish, it’s likely just nervous. Your beardie has likely only ever interacted with the breeder for its whole life!

Give it some time to get adjusted by being handled by another human and your little guy or gal is sure you calm right down. One way to help your bearded dragon acclimate to you is to place an item in their cage that smells like you. This helps your bearded dragon get used to your smell and can make handling him/her much easier.

The second unfamiliar situation that could cause your new bearded dragon to become a bit aggressive is if they are a little freaked out by their new habitat. Again, your dragon has only been in one habitat its whole life, so it is likely going to be a bit hesitant and irritable when placed into a new environment.

The same can also be said for a dragon you have had for a while. Changing an animal’s environment can be a bit of a shock to their system, so even if you are simply moving some things around in their cage, that could potentially cause them some stress.

It is recommended to only move things in their cage once every few months as this can cause your dragon to become stressed in this new, seemingly unfamiliar environment.

Another common reason for aggression in bearded dragons is fear. Because of the placement of their eyes, bearded dragons have bad depth perception. This type of vision can make it difficult for them to discern the distance of many things, making it important to slowly approach your bearded dragon and not make any swift movements.

Additionally, approaching your bearded dragon from the back or attempting to handle them when they are relaxing or almost asleep can be another cause for aggression that would normally be out of character. Sometimes, bearded dragons may fear other large animals such as dogs or cats.

If your beardie is showing signs of aggression when large animals are near them or their enclosure, find a way to separate the animals to ensure your beardie does not feel stress or lash out towards your other pets.

Though it is encouraged to wait at least 2 weeks before handling a brand new dragon, after that adjustment period has passed, it is imperative to handle it regularly. If you have purchased your beardie from a reliable breeder, they have already laid a lot of the foundation for an excellently socialized reptile.

Your only duty from there is to continue handling and interacting with your new pet. Make sure to take your beardie out of his/her enclosure often and interact with him/her several times a week.

Their desire to be interacted with is the reason they are so calm. They love to spend time with you, and the more time you spend with them, the calmer they will be. In fact, bearded dragons tend to be very affectionate.

If you have a routine with your beardie and tend to interact with them at the same time every day, they will begin to anticipate that interaction and can actually get sad if they do not get that connection time.

Sometimes, long periods of time without interaction can de-socialize your beardie. If that happens, you will have to start from scratch to re-socialise your pet. If you happen to purchase your bearded dragon from someone who did NOT socialize him/her, you have your work cut out for you.

1. Make Sure Your Beardie Is Comfortable

An uncomfortable bearded dragon is nothing short of a nightmare. Make sure their habitat has the proper bedding and lighting. Bearded dragons require both a basking light for warmth and full spectrum UVA and UVB.

As previously mentioned, it is imperative to feed your beardie so he/she does not go hungry. Your dragon should have a good diet of worms, roaches, and/or crickets fed to them every day.

3. Handle Him/Her as Often as Possible

Though it will likely be a bit unpleasant for both you and your bearded dragon, it is important to handle him/her often to increase socialization. Socializing an already aggressive adult bearded dragon is no easy task, but it takes consistency to see change happen.

4. Be Prepared to Be Bitten

The harsh reality of handling an aggressive bearded dragon is that you are likely to be bitten or nipped at, however this is a sacrifice you have to make to create a better relationship with your aggressive beardie.

Taking certain precautions such as wearing gloves and thick clothing while handling your pet can make this transition period a lot easier and less painful. If you are bit by your beardie, make sure to properly care for the wound. If the bite breaks the skin, wash your wound with antibacterial soap, apply antibacterial ointment, and cover with a bandage if necessary.

The final and most important tip I have for “fixing” an aggressive bearded dragon is by far the most important. You will not succeed without patience. In some cases it can take several months to fully socialize a bearded dragon. The key is to remain consistent and devoted to building a better relationship with your beardie.

How to Keep Your Bearded Dragon Calm

If your bearded dragon is experiencing any type of out of character aggression, there are a few things you can do to calm them down. One tip is to give them a bath. Just like people, sometimes bearded dragons get stressed, and one of the best ways to relax is to take a nice warm bath.

A short 20 minute dunk in some 85°F water could be just the ticket to a happy beardie. Be sure to keep his/her eyes and nose out of the water!

If the bath time isn’t enough, another way to calm your bearded dragon down is to limit the light in the room. Oftentimes, the simplest way to reduce their stress is to throw a towel over their enclosure.

This tip can also muffle loud noises that could be causing your pet stress. My favorite way to calm my bearded dragon is to gently stroke her head. I find that to be the best way to reduce her stress while simultaneously creating a bond.

There are many things to consider when caring for a bearded dragon, and temperament is certainly one of them. Their docile personality makes bearded dragons one of the calmest reptiles and if you happen to have an aggressive beardie, there are many ways to socialize an otherwise peaceful animal.