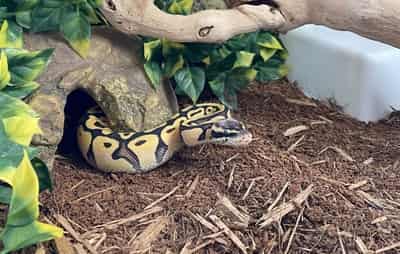 Have you been noticing your ball python moving around more than usual, or generally exhibiting a bit more activity than you are used to seeing? While some types of snakes tend to be more active, ball pythons are generally happiest when they can curl up in one spot and relax, so it is a good idea to keep an eye on overactive ball pythons in case something is out of sorts.

So, why is my ball python moving so much? Aside from regular nocturnal activity that is common for ball pythons, overactivity can be caused by harmless things such as shedding or the start of mating season, or it can be a sign that something in your snake’s environment is insufficient and they are looking to escape into better conditions.

In this article, we will discuss both harmless and more worrying reasons that your snake might be moving around more than they normally do, as well as how to keep them happy so that they do not feel the need to leave their enclosure. 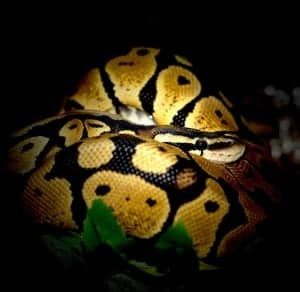 Snakes in general can be either diurnal (active during the day) or nocturnal (active at night). Some snakes, such as corn and milk snakes, are called crepuscular, meaning they are most active around sunrise and sunset.

Ball pythons fall into the middle category, as they generally rest during the day and wake up to become more active once the sun goes down. Because of this, you will likely observe your snake becoming more active at night, and this is perfectly normal and nothing to be worried about.

Since your ball python lives on a different sleep-wake schedule, or circadian rhythm, than you as their owner, it is important to make sure that your ball python has an environment they are comfortable and happy in.

This generally means adjusting the light and heat in their enclosure to match what they would experience if they were living in the wild — for example, running heat lamps with bright lights 24/7 may make it much harder for your snake to tell day from night, and as such they will likely become confused or stressed at the changes to their circadian rhythm.

The room your snake is housed in can affect this as well, if you keep their tank or terrarium in a brightly lit room that gets a lot of traffic at night. Keeping the lights on in the room you snake is in, even if the actual tank lights are off, can have the same disorienting effect on them.

If possible, you should try to keep your snake in a room that is not used much during the evening and nighttime, such as a home office or guest room.

Shedding is a normal and healthy part of snake life, ball pythons included.

Although it is common for snakes to become lethargic or lazy in the pre-shedding period — which you will recognize by your snake’s skin turning dull or pale and their eyes going blue and milky due to the separation of the top “shed” layer of skin separating from the scales underneath — once it comes time to actually get rid of the excess skin, your snake will likely become more active than usual.

Snakes in shed cannot always discard their old skin easily. In order to help with the shedding process, they will likely be slithering around their tank considerably more often than they normally would, in addition to rubbing up against their decorations or other habitat fixtures as if they are itchy.

Don’t worry if you see this happening — your snake is not acting out of the ordinary, just trying to use the rough surfaces of their habitat to help them get as much shed skin off their bodies as possible.

Shedding can be an uncomfortable time for snakes, so try to avoid handling them as much as possible while they are in shed. Just let them run around their tanks and do their own thing until the shedding period is over.

If you want to help your snake along with a tough or problematic-looking shed, you can do so by keeping a distance but still ensuring that their tank’s humidity and temperature are set at the proper levels, since these can affect how easy it is for your snake to shed.

However, do not ever try to peel off your snake’s shed skin in an attempt to help them — although it may seem like an easy fix for a tough shed, you can hurt or injure your snake by doing so while not properly trained. Take them to a vet or reptile expert instead, who can remove the skin in a way that is safe, comfortable, and nonthreatening for your snake. 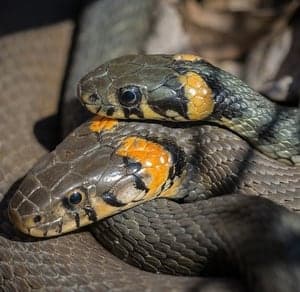 If you see your snake beginning to act up around the start of spring, this may be due to the fact that they are searching for a mate. Snake mating season is at its peak during early spring, but overactive snakes may show signs of looking for a mate during other times of the year as well.

This is most commonly seen in male ball pythons, as in the wild it is generally the male who goes out looking for a female mate. If you see your snake slithering around and seemingly exploring a habitat they should already be familiar with, it may be that they are poking around hoping to pick up a whiff of female snake pheromones, just as they would do out in the wilderness.

This may be most common in male snakes that have just reached maturity, since they are new to the instinct to mate and have not yet gone through enough mating seasons to realize that there are no mating options around in captivity.

Female snakes in the wild generally do not hunt for a mate, but simply release pheromones and wait for a male to come to them. Because of this, if you have a female snake and see them exhibiting overactive behavior during peak mating seasons, it is likely for different reasons.

Problems in Your Snake’s Environment

Your ball python may be overactive due to perfectly harmless reasons — however, if you still think that there could be other factors in their behavior, it is worth checking on their environment just to be sure that they are not overactive due to an attempt or wish to escape. Snakes will generally only try to escape if they feel as though their environment is not livable.

This can mean anything from an overly dirty tank to improper temperature or humidity. Ball pythons, being tropical snakes, generally require higher heat and humidity than other types of snakes.

Snakes are cold-blooded like other reptiles, so moving around is not so much a way for them to generate heat as it is a sign that they are in too cold of a spot and trying to find a place that is warmer. This is why they will generally move in large areas around their tank, rather than simply sticking to one spot like a warm-blooded animal might do.

Snakes may also attempt to escape if they feel that the tank is too small or unhealthy. Always make sure your ball python is housed in a tank that has enough room (and err on the larger side if you are unsure), and that you are regularly cleaning and disinfecting both the tank itself and the decorations inside so that there is no mold, rot, or bacteria buildup.

Your snake might also be looking for food. Even with regular feedings, some snakes will metabolize and burn energy faster than other snakes, or might simply become more hungry between feedings.

If this happens, your snake may follow their natural instinct to find prey, even in captivity, leading to them circling the tank looking for something to eat, or even attempting to escape in order to find better hunting grounds. Always make sure your snake is well-fed and happy so that they do not feel the need to hunt during non-feeding times. 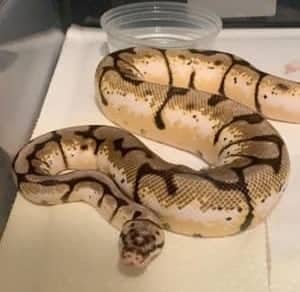 Snakes move around for a number of different reasons, and tend to have energy levels that fluctuate at various times of day. Since ball pythons are nocturnal animals, they move around more at night, and this should be considered normal if you notice it.

However, their sense of timing may be thrown off if you have a light on constantly or if you turn night lights on in the room where they are kept, so try to minimize this and mimic their natural environment as much as you can.

Snakes will have more energy than usual and may be moving around a lot during shedding or mating periods, as shedding requires a snake to move and rub its body up against things to remove the shed skin, and mating season brings up a male snake’s natural instincts to hunt for a female snake.

However, your ball python may also be moving around a lot or trying to escape if their habitat seems out of balance or insufficient, such as if the temperature or humidity is wildly off, or if they are hungry and searching for prey. To avoid this, always make sure that your snake is properly fed and that you are keeping their habitat in the proper living conditions.