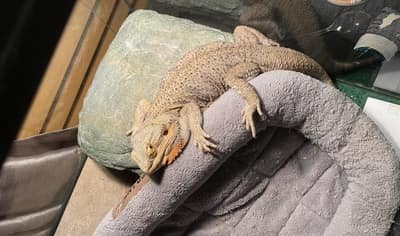 Bearded dragons engage in many behaviors that may seem odd, such as waving and drooling. Usually these behaviors are nothing to worry about, but one thing you should look out for is your bearded dragon flipping over.

So, why do bearded dragons flip over? Flipping over is a sign of atadenovirus, a rare and dangerous viral infection. It can be fatal, so if you see your bearded dragon flip over, you should take it very seriously and seek medical attention for your pet.

Read on for information about the infection and its symptoms as well as tips for prevention and treatment. Although atadenovirus can have disastrous effects on bearded dragons’ neurological systems, gaining knowledge on this disease will allow you to prevent your pet from falling ill in the first place. In addition, if your bearded dragon is already sick, you can learn how to relieve its symptoms with palliative care. 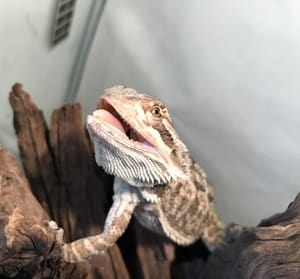 Atadenovirus is a serious and very contagious viral infection. In the past, it was also referred to as “adenovirus.” It’s very rare, but has been known to affect a small percentage of bearded dragons.

Unfortunately, it can be fatal, particularly for young or juvenile bearded dragons. Also known as “wasting disease” and “star-gazing disease,” advanced atadenovirus often presents with neurological symptoms such as looking upward for no identifiable reason (referred to as star-gazing) and flipping over.

If you see your bearded dragon flipping over, this is a sign that you should get your pet medical treatment as soon as possible. This can happen at any age, but the most common way for your pet to be infected with atadenovirus is to be born with it. Usually they catch it from their mother before hatching, but it’s also possible to catch it from other bearded dragons in their environment through direct contact. Once a bearded dragon is infected, it is infected for life, even if the disease appears to go dormant.

How Contagious is Atadenovirus?

It’s important to keep your pet away from other reptiles if it is diagnosed with atadenovirus. Although there are ways to treat your bearded dragon and keep the disease at bay, your pet can spread atadenovirus to other lizards that are not infected. You should never breed bearded dragons that have atadenovirus.

There is one exception to the rule of keeping your bearded dragon away from others. If you have other bearded dragons that also test positive for the infection, these lizards will not present any additional harm to each other. They can most likely go on to live normal lives and may only occasionally be affected by flare-ups of symptoms.

Along with rolling or flipping over and constantly looking upwards, there are some other symptoms that can help you identify atadenovirus in your bearded dragon. Your pet may have difficulty breathing and diarrhea.

It’s also common to see weight loss as a result of this infection because as the disease progresses, it becomes more difficult for your bearded dragon to move and eat.

This viral infection often causes inflammation in the nervous tissue, digestive system, liver, and kidneys. The immune system is typically suppressed as well, making your bearded dragon more susceptible to other health issues. Lethargy is one indicator of a suppressed immune system. Pay close attention to your pet if it seems lethargic, because an impaired immune system may also make it harder to fight infections. Additionally, it can lead to recurring problems with parasites. These may include worms, amoebas, flagellated protozoa, and coccidia.

Impairment of the Brain and Nervous Tissue

Losing weight and flipping over are the two most significant symptoms because they indicate impairment of the brain and nervous tissue. This means that the atadenovirus is very advanced and sadly, can result in death.

How to Prevent Atadenovirus

There are a few precautions you can take to keep atadenovirus from spreading. You can do this by keeping affected bearded dragons by themselves, away from any other reptiles. It’s also important to avoid cycling equipment, substrate, and uneaten food between different tanks as this can cause cross-contamination.

Juvenile Bearded Dragons and the Risk of Atadenovirus

It’s possible that a recently purchased juvenile bearded dragon is infected with atadenovirus. This is because lizards are often bred in tanks where they are in contact with others, so it is easy for infections to spread. Unsanitized tools can also spread the disease.

Juvenile bearded dragons that are under 90 days old when they contract atadenovirus typically die within the next three months. It is possible for an affected bearded dragon to live a relatively normal life, but they must receive specialized care.

Most professionals recommend that all bearded dragons get tested for atadenovirus. The possible health implications alone are enough to justify a test. But another important reason all bearded dragons should be tested is that some may not show symptoms, but are still carriers of the disease. This means that even though they may not seem sick, they’re capable of spreading the infection to others.

A Polymerase Chain Reaction, or PCR, is the most common test that a veterinarian will use to determine if your pet is affected by atadenovirus. A PCR is a simple DNA probe test that requires a swab from your bearded dragon’s feces or cloaca. Cloaca is a chamber that collects secretions from the reproductive, gastrointestinal, and urinary systems. It empties through a vent between the lizard’s back legs.

How to Treat Atadenovirus

When thinking about the best course of action to treat atadenovirus, the fact is that there are no drugs that directly treat and eliminate atadenovirus in bearded dragons. Realistically, the best course to follow is to carefully manage the disease with palliative care. You should focus on keeping your bearded dragon warm, always having a UVB light, and checking your pet for parasites on a regular basis.

Although there is no cure for atadenovirus, It’s still important to go to the vet if you notice your bearded dragon flipping over. Your pet will be tested for atadenovirus, and the vet will give you specialized advice related to palliative care. They may suggest antibiotics, anti-inflammatories, calcium supplementation, and milk thistle or other nutriceuticals.

The goal is to simply provide as much support as possible to your bearded dragon in the hopes that the disease will go dormant. In some cases, euthanization is the best option to prevent further suffering.

When your bearded dragon is experiencing bouts of inflammation, it’s essential to make sure it is properly hydrated. You may also need to help your pet feed until it is feeling better. To do this, you’ll need a small syringe and baby food such as pea puree, pumpkin, or squash.

Another option is to soak bearded dragon pellets in unsweetened organic apple juice. This is a good method of making sure your pet is getting the nutrition it needs to support its immune system and keep it from losing weight.

The good news is that most bearded dragons affected with atadenovirus recover with proper care. Neurological symptoms may cause a lot of damage and result in some degree of residual effects; your pet may be afflicted with mild handicaps for the rest of its life. In most cases, though, these bearded dragons can go on to live happy lives as long as they are cared for properly.

However, it is important to keep in mind that when neurological symptoms such as star-gazing and flipping over are seen, it can be too late for your bearded dragon to receive effective treatment. Unfortunately, atadenovirus can be fatal and it is a possibility that your pet will not survive this infection. 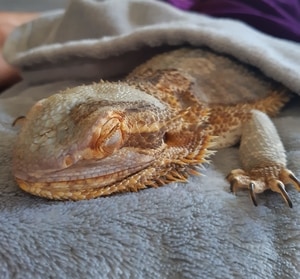 If you notice your bearded dragon flipping over, this is most likely a sign of atadenovirus. This serious viral infection can lead to death in some cases, but with the proper care, most bearded dragons will survive and live a mostly normal life. Taking note of prevention methods and ways to provide palliative care are great ways to make sure your pet stays healthy and comfortable.

Atadenovirus can wreak havoc on your bearded dragon’s immune system, but you should keep in mind that atadenovirus is not necessarily a death sentence. Getting your pet tested at a young age will allow you to take the necessary steps to ensure it gets the treatment it needs.