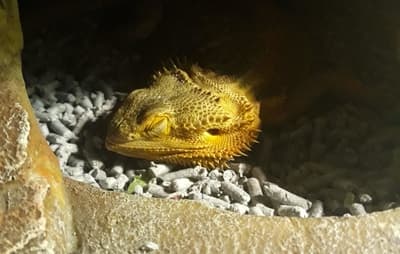 Has your bearded dragon looked dead and almost scared you senseless while he was sleeping? If so, you’re not alone. Bearded dragons often look dead when they sleep, for good reason, causing many owners to mistake their sleeping with death.

So why do my bearded dragons look dead when they sleep? In short, bearded dragons slow their metabolism and breathing during deep sleep, which accounts for half of a bearded dragon’s sleep cycle. This causes them to breathe less while they sleep, looking dead in the process.

The human sleep cycle lasts 60 to 90 minutes and is interrupted by the REM cycle throughout. Bearded dragons, however, have a sleep cycle that lasts 80 seconds, split evenly between REM and slow eye movement. What this means is that bearded dragons have more deep sleep than humans, resulting in a lower metabolism for a longer amount of time.

So, bearded dragons look like they are dead simply because their breathing slows for about half of their sleeping time, which lasts around 8 to 12 hours total. 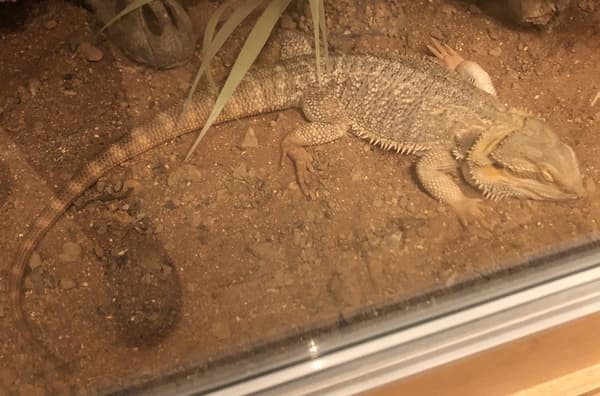 Just as in normal sleep, the metabolism and breathing slow during brumation, only more so, causing them to look dead or dying during the brumation period.

Many people think that since their bearded dragon is kept in captivity that it will not go through its brumation. Unfortunately, this is not the case for many bearded dragons. Since bearded dragons have evolved over millions of years, it is much more difficult to turn off brumation than one might think.

As a result, bearded dragons, even those in captivity, will go through a brumation cycle during the winter months. Even if the light and heat sources remain consistent, the bearded dragon will be able to detect when the days are shorter, which will signal to their body to go into hibernation mode.

This causes the bearded dragon to seem sluggish and potentially be less interested in eating. More so, the brumation will cause the bearded dragon to find an insulated spot to sleep for long periods of time. This amount of time can alternate between several hours to four months, though the exact time will differ from dragon to dragon.

Some common signs that your bearded dragon is in brumation include the following:

What to Expect During Your Bearded Dragon’s Brumation

If you have never seen a brumation before, it can be extremely stressful or scary. Many people mistake the brumation with their bearded dragon dying or getting sick. Here are some key tips and ideas to help you prepare for your bearded dragon’s brumation:

Understand All Dragon’s Are Different

First and foremost, realize that every dragon is different. As a result, the brumation period will be different from dragon to dragon. Some bearded dragons in captivity have little to no brumation period, while others will last for months. The longer you have your bearded dragon, the more familiar you’ll become with their individual brumation signs.

Get a Fecal/Parasite Test Done

Many bearded dragon owners like to get a fecal/parasite test before the brumation. The reason for this is that you do not want your bearded dragon to have any illnesses during the brumation period since they will have less energy to fight it off. If you see any early warning signs of the brumation, go ahead and take your dragon to the vet to get these tests done.

If the tests come back clean, then you are free to continue to the next steps. If the vet finds something wrong with your bearded dragon, be sure to follow their requests and advice to get your bearded dragon back to its optimal health before it’s brumation. 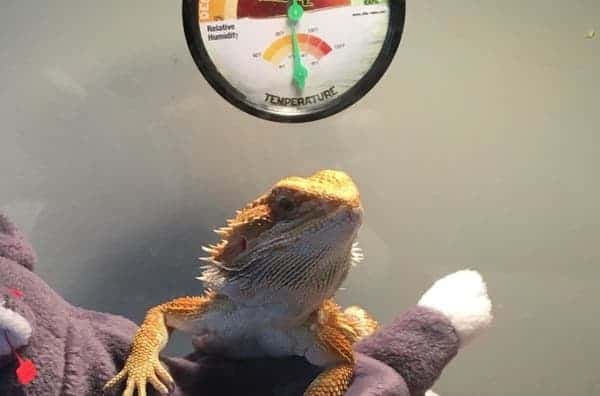 Once you get the all-clear from the vet, you can reduce the temperatures of the cage. The reason for this is that brumation evolved so bearded dragons could survive during colder temperatures. Lowering the temperature of the enclosure will mimic what happens in nature, giving the brumation purpose.

Since you’re feeding your bearded dragon less food, you should expect him to lose some weight and produce less waste. However, he should not lose an astronomical amount of weight since the brumation slows down all of its energy consumption and use.

Although you should reduce food during brumation, make sure to provide water for your bearded dragon. Put a small bowl in his cage and change the water out a few times a week. However, make sure that the water bowl is not big enough for your dragon to lay in.

You will know that your bearded dragon’s brumation is over when you walk in to find him walking around happily and healthily. Once this happens, offer greens, water, and some food to the bearded dragon. Although the bearded dragon may not eat that much the first couple of days, make sure to provide food anyways.

How to See if Your Bearded Dragon Is Sleeping, in His Brumation Stage, or Dead

Once again, here are the most common signs of brumation:

If your bearded dragon shows one or more of these signs when the season starts to change, then he is probably just in its brumation stage. Even though the heat light provides constant heat for your bearded dragon, the dragon can detect shorter days, which means it’s time for the brumation period to happen.

If your dragon did not exhibit any of the signs and it is not in the colder months, you can determine if your bearded dragon is sleeping or dying simply by waking him up. You can do this by turning on a light since bearded dragons are extremely sensitive to light, or you can try poking him a couple of times.

Unless the bearded dragon was showing signs of illness beforehand or has an odd color, chances are he is only sleeping.

It is completely understandable to think that your bearded dragon is dead when he is in fact only sleeping. Since bearded dragons slow their metabolism and breathing while they sleep, they often look dead.