Home » Lizards » Chameleons » Why Do Chameleons Hesitate When They Walk? 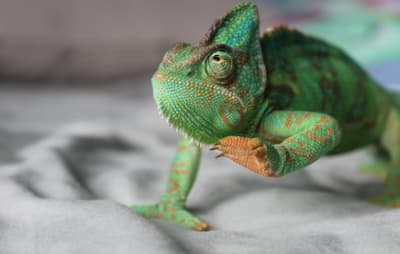 It can be quite a funny sight to watch your chameleon walk. Even in captivity, chameleons retain the way they walk in nature, which is slow and jerky. They wobble side to side and hesitate between steps, moving one limb at a time. It can be very entertaining to observe your chameleon as it moves around its territory!

So why do chameleons hesitate when they walk? While a chameleon’s gait can look silly, it has a very important purpose: to blend in with leaves blowing in the wind so that it can avoid predators and remain invisible to prey.

In this article, you’ll learn about the two main reasons why chameleons hesitate when they walk. You’ll also get to read about why chameleons are so great at climbing trees based on their feet and tails, as well as whether or not they can run and other genetic adaptations that chameleons have developed to ensure survival.

Why Do Chameleons Hesitate While Walking?

There are two primary reasons for chameleons’ hesitation while walking. It’s a means of protection against predators as well as a strategy for catching prey. Read on for more details about each explanation for hesitation.

Chameleons walk with jerky motions and seem to hesitate as they take steps. They move back and forth slowly, imitating the way leaves move in the breeze. Because chameleons spend a lot of time in trees and branches in the wild, this is a very effective way to move around without predators noticing them.

Additionally, the way chameleons grip trees with their feet makes for another layer of protection. Their most common predators are birds, which typically swoop down and carry off prey using their talons.

If they’re able to see a chameleon even though it’s blending in with the leaves on a tree, they may still struggle to pry it from its branch because of its extremely strong grip. 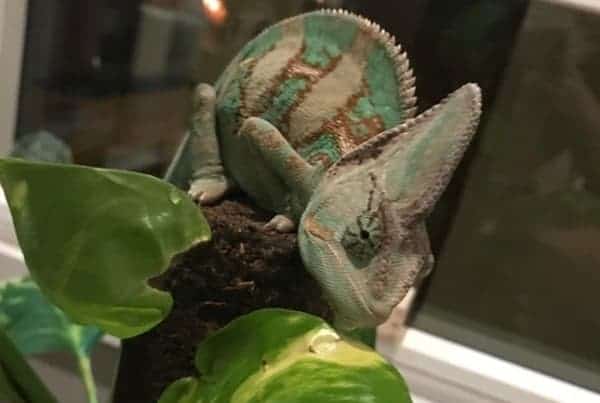 This imitation of leaves in the wind isn’t just helpful in avoiding predators; it’s also a behavior that makes chameleons better predators themselves! Because they blend in with the leaves so well, their prey often unknowingly comes close enough for the chameleon to catch it with its tongue.

How Do Chameleons Walk?

Chameleons make great use of their tails and grouped toes to cling to branches and sway from side to side as they walk. They edge along using one limb at a time to move forward. While chameleons’ feet appear to have two toes, they actually have five toes that are grouped together, much like a duck’s feet or a bat’s wings.

This specialized setup is perfect for gripping branches with uneven bark, or branches that are narrow in diameter.

In addition to their five toes on each foot, chameleons also have sharp claws on the end of each toe. These claws give them even more stability and added grip. Their tails are prehensile, which means that they have adapted over time to be able to wrap around branches and give chameleons even more stability while climbing.

Because of this, unlike many other types of lizards, chameleons cannot regrow their tails if they break off.

Chameleons are capable of running, but it’s pretty rare. Even when they do run, it’s not very quickly; chameleons are considered one of the slowest reptiles. These animals will typically avoid running unless it is their only option. Chameleons much prefer blending into their environment to actively trying to escape predators.

What Are Other Ways Chameleons Have Evolved?

The way chameleons walk, along with the way their toes and tail have formed, is the result of evolution. Chameleons have many impressive features that are the result of adaptation in order to give the animals more of a chance of survival. Here are a few of the interesting chameleon adaptations.

While this is the most commonly known feature of chameleons, scientists are still learning exactly how they’re able to change their colors. Recently, it was discovered that chameleons have cells called iridophores under the skin. Chameleons can excite or relax these iridophores, causing them to change structure and color.

Thermoregulation is one of the main purposes of chameleons’ color-changing skin. Thermoregulation is a process in which cold-blooded animals maintain their body temperature using their environment. Chameleons will adjust their skin color to a darker shade when they need to absorb more heat–some chameleons can turn almost entirely black.

Another reason chameleons change the color of their skin is to communicate with other chameleons, especially during mating season. Male chameleons will often show off their brighter colors in order to attract mates. Patterns that include bold spots and striking stripes that can range from red, orange, and yellow to bright blue have all been seen in chameleons.

These bright colors are also used to communicate with other males in an effort to intimidate them and display dominance. Black, purple, red, and orange are all aggressive colors that chameleons show off when they want to intimidate others.

This can indicate that a chameleon is giving others a warning to back off and leave its territory, or it can also mean that the chameleon is ready to fight. 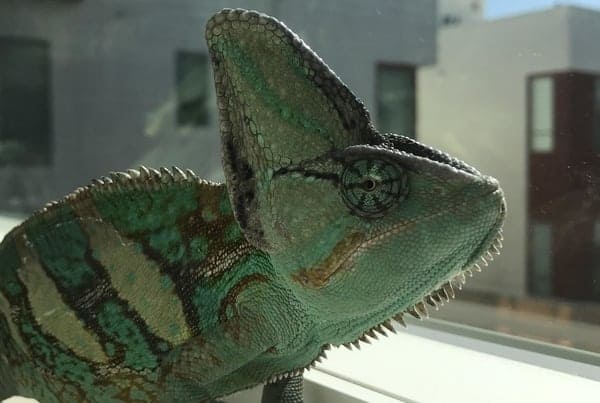 Chameleons have a unique way of seeing. They can see from each eye separately, looking in two different places at once. Their eyes move independently and allow chameleons to see almost 360 degrees around them–they can even see what’s going on directly behind them.

This type of sight is a huge advantage when it comes to hunting fast-moving prey like insects. Chameleons can use their eyes separately to seek out prey, and when they zero in on it, their eyes will begin looking together rather than individually to narrow down their prey’s location. Then they shoot out their tongue and catch their prey.

Chameleons’ eyes stick out quite a bit, protruding out of the sides of their heads. This means that they need special protection, which is another adaptation that chameleons have attained over time.

This protection includes hooded eyelids with scales that act as a barrier between the eyeballs and any possible threats. This way, the eyes’ soft tissue is completely protected.

Chameleons’ hoods have two primary purposes. The first is to help them collect water. Chameleons usually live in drier environments, and their diet of insects doesn’t provide much moisture either.

Therefore, the dew and water that collects on their hood acts as one of their main sources of hydration. The dew simply slides off the chameleon’s hood, down its face and into its mouth.

The second purpose of chameleons’ hoods is to act as a tool for the mating process. Males typically have much larger hoods than females, and if males get into conflict when trying to go after the same mate, the male with the largest hood will typically intimidate the others.

Chameleons are typically arboreal, which means they mainly live in trees, climbing from branch to branch. While their hesitating walk can seem strange, it’s actually a very valuable method of protection and also an advantage when it comes to hunting.

The hesitation in a chameleon’s gait results from the animal attempting to imitate leaves blowing in the breeze. This allows chameleons to blend in and hide from predators. Blending in also makes it easier to catch prey. When prey such as insects have no idea that a chameleon is in the area, it’s a simple feat for a chameleon to stick out its tongue and catch them.

Chameleons have well-developed five-toed feet and a prehensile tail that can grab onto branches with impressive grip. These lizards are extremely well-adapted to living in the wild. You can also see adaptations in their color-changing skin, 360 degree vision, and their hooded heads.

Chameleons are truly amazing creatures that are much more complex than most people realize! While they make for a very fun pet, they’re also extremely well-suited to life in the wild.