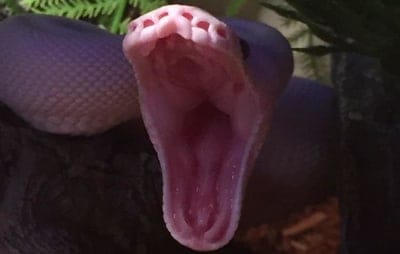 When a pet becomes aggressive, it’s usually a sign that something more is going on. Whether your pet is acting out because of stress or illness, aggression should never be ignored. So if your ball python is constantly striking, you should definitely make an effort to figure out the reason behind it.

So why does my ball python keep striking? If you just got your pet snake, it may not be used to you yet. But if you’ve had your snake for a while, aggression could be a sign of stress and defensiveness, improper handling, or an insufficient cage setup.

Below, check out our detailed explanation of why ball pythons strike and what you can do to help your pet feel more safe and comfortable around you.

Why Do Ball Pythons Strike?

There’s actually a pretty wide variety of reasons that ball pythons may hiss and snap at their owners! These include:

Your Ball Python Is a Juvenile, or You Just Adopted It

In the wild, young snakes have to be extremely aggressive in order to survive, so it’s just part of their natural demeanor. With time and familiarity, ball pythons become less aggressive and nippy.

If you’ve just adopted your ball python, it needs to take time to grow accustomed to its new environment. It’s best to give it a few days before trying to handle it, or it may strike because it perceives you as a predator or threat.

The ideal time to handle your snake is definitely not before or after feeding it. Before feeding time, your ball python is expecting food. If your pet thinks that you’re about to feed it, it will prepare to strike.

This type of striking and biting is called a “feed-response bite.” It’s not meant to be aggressive or to hurt you; your snake simply thinks you’re trying to feed it rather than handle it.

Handling your ball python right after it eats isn’t a good choice either. Your pet needs time to digest its meal, and immediate handling can actually cause it to regurgitate. Therefore, if your snake is approached or handled when its main priority is processing the food it just ate, it’s likely to defend itself by striking.

You’re Handling Your Snake Too Roughly

Even if you avoid handling your ball python around feeding time, rough handling can lead to aggressive behaviors like striking. It’s important to move in a slow, non-threatening way when you’re around your snake.

Quick motions can put your pet on edge, and holding your snake too tightly will come across as a threat. Rather than thinking about holding on to your snake, let your snake hold on to you. This will be more comfortable for both of you, and there’s much less risk of striking!

Your Pet Is in Pain

Like many other animals (and even humans), pain can have a huge effect on demeanor. It’s only natural for your ball python to become more defensive if it’s in pain. The pain might be caused by an injury or illness, but regardless, it’s important to take your snake to the vet, especially if it’s acting out of character.

Your Ball Python Feels the Need to Defend Its Territory

When a snake feels threatened, it finds it necessary to defend its territory from perceived predators. If you haven’t yet created a bond with your ball python through feeding and handling, it might not yet understand that you’re not a threat. Striking is simply its way of defending itself and the place where it feels safe.

Your Snake May Have a Fear of People

This is most common in ball pythons who have had previous owners. Unfortunately, some owners don’t take good care of their snakes and may even neglect or abuse them. This can result in the snake developing a fear of humans and striking as a defense mechanism. The best thing to do in this situation is to give your ball python time and space.

As time goes on, your pet will begin to feel more comfortable in its environment. After several feedings, your ball python will grow to associate you with food rather than with negative treatment, and the fear of humans should lessen. 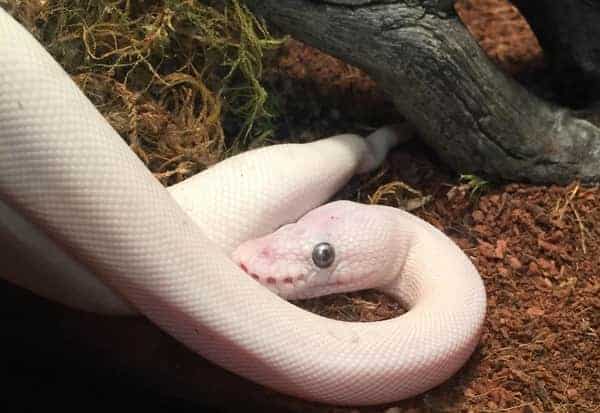 Ball pythons need plenty of cover and places to hide in order to feel comfortable. In the wild, they spend most of the daytime hiding away, so it makes sense that those habits carry over even in captivity. In addition, ball pythons need physical and mental stimulation.

This means that you need to provide at least two hides in the tank: one on the warm basking side, and one on the cooler side. This way, your pet will be able to feel safe regardless of the temperature it prefers at the time.

You’ll also want to purchase some fun accessories like fake shrubbery and branches for your ball python to climb on. This will stimulate your pet by giving it new ways to explore.

What Should I Do When My Ball Python Strikes?

Stay calm! Ball pythons typically let go pretty quickly after biting. If you try to force your snake to let go, you could cause damage to its teeth and jaw. Ball pythons don’t have fangs and they’re not venomous, so their bites aren’t very severe. You may notice a couple of drops of blood and soreness, but you shouldn’t have to seek medical care. However, do make sure to clean the wound thoroughly.

How Can I Tame My Ball Python?

Luckily, if your ball python is being aggressive, there are plenty of ways to help it calm down! The goal is to handle your snake in a non-threatening way and eventually build familiarity with it so that it doesn’t associate your scent with danger. Here are a few ways to help your ball python begin to trust you and stop striking.

You can purchase thick reptile-handling gloves to protect you from possible bites. Another option is to pick out some snake tongs or hooks, which give you the ability to pick up and move your ball python without having to touch it. These are a great choice if your snake tends to strike frequently. Even with gloves on, it can be a bit of a shock to be bitten by your ball python.

Add to Your Ball Python’s Environment

If your snake’s striking habit and aggression is the result of an insufficient tank, add some accessories and hides to your ball python’s habitat. Give it a few days and see if your pet’s behavior seems to calm down.

Cleaning your snake’s tank regularly can also play a part–a dirty tank leads to stress and even illness. Providing your ball python with a clean tank and fresh water makes a huge difference in its overall demeanor.

When you take your ball python out of its enclosure, its new environment needs to be a safe one. Other pets, small children, and sudden loud noises can cause stress. Striking can take place as a result. Instead, dim the lights to mimic night time, which is when ball pythons emerge from their hiding places in the wild.

If your ball python strikes a lot and is generally aggressive, use snake tongs or a snake hook to remove it from its tank, and then just spend time with it in the same room. Don’t force physical contact with a snake that seems stressed and has a habit of striking. Be patient and accept that it will take time for your pet to feel safe around you.

Let Your Ball Python Smell You

Snakes have a very advanced sense of smell. You’ll know your ball python is taking in your scent when it flicks its tongue at you. When it’s doing this, try not to move or pick it up. Your goal is to get your pet to associate your scent with safety rather than danger.

Striking in ball pythons indicates a high level of stress and fear. This can be caused by age, improper handling techniques, problems with your snake’s environment, a fear of humans, and many other factors.

While striking is certainly not an ideal behavior, there are steps you can take to correct it. Always take your time and be patient when working with your ball python. You can purchase tools like a snake hook or snake tongs to handle your snake more easily, and enriching its environment can make it feel more safe and secure.

If you get bitten by your ball python, don’t panic! It will let go quickly and shouldn’t be able to cause much damage. As long as you take care in handling your pet snake, it will eventually grow to feel comfortable around you.