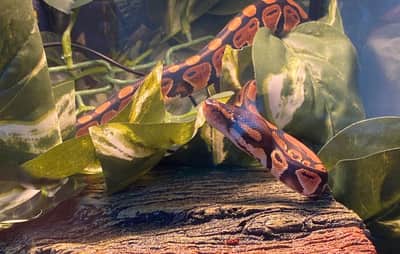 If you notice your ball python sticking their head straight up towards the sky, with their nose pointed directly vertical, this can at first seem like a harmless behavior similar to stretching or sniffing. However, if you find your snake doing this, it is most likely an indicator of a much more serious underlying condition.

Why does my ball python raise his head? Ball pythons and other snakes can demonstrate stargazing syndrome, where they point their nose straight up in the air. This is generally an indicator of underlying disease, such as a viral or bacterial infection, inclusion body disease (IBD), or head trauma from an impact.

In this article, we will discuss some of the possible underlying conditions that may cause your snake to exhibit stargazing syndrome, as well as what to do when you find your snake in this position.

How to Recognize Stargazing Syndrome 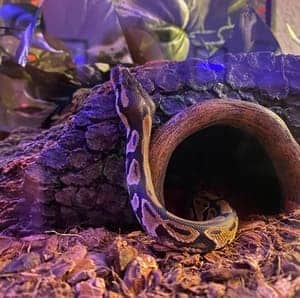 The first thing to do when you see your snake raising its head is to check and try to determine whether the movement is simply your snake reaching up for a stretch or if they are actually exhibiting stargazing syndrome.

Unlike a simple stretch, where your snake reaches its head up for a moment and then drops back down or moves out of the position, stargazing syndrome can be recognized by the slightly unnatural behavior of your ball python going completely vertical, with their head pointing up and their nose turned towards the roof of their tank or terrarium.

This can be either a prolonged movement, where your snake stays in this position without moving for an extended amount of time, or a repeated movement that you may see multiple times in a short timespan.

Unlike stretches or movement, which are all controlled consciously by your ball python, Stargazing syndrome happens when something within your snake’s body causes the muscles just behind their head to contract, pulling their snout upwards into a vertical position.

This is generally caused by an infection, neurological disorder, or other underlying health condition, which makes it harder for your snake to control their own range of movement. While stargazing syndrome in and of itself is not a medically threatening condition, it serves as a warning sign that your snake has something else wrong inside their body and needs immediate care.

One of the diseases that can cause stargazing symptoms in ball pythons and other pythons and boas is known as Inclusion Body Disease, or IBD. IBD is a viral disease that can be transferred to your snake through mites, and is generally fatal once contracted.

Stargazing syndrome is one of the more visible symptoms of Inclusion Body Disease, although other symptoms you may see can include regurgitation of food or a lack of appetite, abnormal changes to your snake’s normal shedding routine, and strange movements other than stargazing such as corkscrewing motions in your snake’s head and neck or your snake rolling over onto their back rather than their belly.

This happens because after IBD is contracted, it changes from a viral disease in the early stages to a neurological disease in the later stages, and the further it progresses, the more it will cause your snake to act in strange ways, as your snake may not have full control over their body or movements anymore.

If you suspect that your snake may have IBD, you should separate them from any other snakes they may be housed with and take them to the vet immediately. No known treatment is currently available for IBD, but your veterinarian will be able to discuss the best course of action for you and your snake if it is determined that your snake has IBD and not a different type of sickness.

If you own multiple snakes, it is important to quarantine any new boas or pythons that you bring into your household, as they may be asymptomatic but still carry IBD, which is contagious.

This is most true when you are bringing a new boa home, as boas more commonly carry IBD, but pythons are more susceptible when exposed to it. Always house boas and pythons separately to avoid cross-contamination.

Inclusion Body Disease sounds like (and generally is) a very scary thing for your snake to be diagnosed with — however there are less severe reasons your snake might be stargazing, as well. Stargazing syndrome can also be a symptom of a respiratory infection.

If this is true, it is likely that you will see stargazing performed repeatedly, rather than for a prolonged period of time. This happens because your snake is intentionally raising its snout to drain mucus or other fluids from their mouth, rather than unintentionally having to raise their head due to a neurological issue.

Raising the snout allows mucus to filter out of the mouth and down into the rest of the body, allowing your snake to breathe without the filter of mucus clogging up their system.

Other symptoms of respiratory infection in your ball python may include mucus discharge coming from your snake’s mouth or nostrils, weakness or general lethargy, loss of appetite, and wheezing or gurgling sounds due to the mucus in your snake’s mouth.

Your snake may also try to open-mouth breathe, rather than breathing normally, due to their inability to get enough air around the mucus buildup with their mouth closed.

Respiratory infections in ball pythons are generally caused by bacteria, so it is very important to always keep your snake’s habitat clean and their water fresh, as well as to make sure you or anyone else who holds your ball python is properly sanitized before coming into contact with the snake.

Cleanliness is the best way to avoid bacteria or parasites coming into contact with your snake, whether inside their habitat or outside during a feeding or handling session. If you suspect your snake has a respiratory disease, your veterinarian can prescribe them an antibiotic solution for treatment, generally either orally given or injected.

If your snake is severely ill, however, they may need more intensive care. Always take your snake to a veterinarian at the first sign of illness, as allowing your snake to go untreated for an extended amount of time may make the disease worsen and progress into a stage that needs more treatment or may be completely untreatable.

Other Causes of Stargazing

While Inclusion Body Disease and respiratory infections are two common causes of stargazing in your ball python, they are not the only things that can trigger this strange behavior.

Other causes of stargazing are generally neurological issues, such as head trauma or injury that damages your snake’s brain and motor functions, organ dysfunction that progresses and affects the brain, septic infections, exposure to toxins such as pest-killing chemicals or other chemical solutions that are unsafe for your snake to come into contact with, or even extreme fluctuations in temperature that can damage your snake’s internal functions.

Always make sure that you are keeping your snake in the safest possible environment, away from chemicals, pesticides, or household cleaners, and out of any situation that could cause blunt force trauma such as dropping your snake while handling or being less than careful when holding or moving your snake around.

Regardless of what the underlying cause might be, the bottom line is that if you see your snake demonstrating stargazing syndrome, it is a sign that something is wrong and that you should take your snake to the vet immediately.

Not all underlying causes are fatal — although some, such as IBD, definitely are — but immediate veterinary help can help keep even treatable conditions from progressing into something more dangerous.

Although your snake poking their nose straight up may seem like a harmless behavior, it is definitely not. Stargazing syndrome is an unusual behavior in snakes that generally indicates a serious underlying medical condition.

This may be something as serious and deadly as Inclusion Body Disease, or IBD, which attacks your snake’s body first and neurological functions second. Always house boas and python snakes separately, if you have multiple snakes in your household, as IBD can be transferred between boas and pythons.

Although IBD is generally fatal and usually requires euthanization, stargazing may also indicate less serious diseases such as respiratory infections. These can generally be treated and cured, however, if you see your snake stargazing, you should bring them to a vet immediately to have them screened and determine what is causing the stargazing, as well as to avoid any underlying conditions worsening past the reasonable point of treatment.

While IBD and respiratory diseases are generally the most common causes of stargazing, it may be triggered by other injuries or illnesses as well. These include (but are not limited to) head trauma or brain injury, exposure to pesticides, household cleaners, or other chemicals, and organ dysfunction or septic infection.

The large majority of these diseases will show symptoms other than simply stargazing, so if you note any strange or unhealthy behavior in your ball python, do not be afraid to take them to a vet or other reptile expert for help or professional advice.