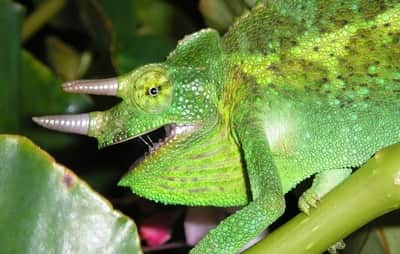 Perhaps every time you come into the room, your chameleon puffs up and hisses. Or maybe you’ve taken to wearing thick gloves while handling because your pet has lashed out and bitten you more than once. It definitely seems like your chameleon feels strongly about you, and not in a good way.

So why does my chameleon hate me? Your chameleon most likely sees you as a potential predator or other threat, or it’s stressed from something else going on in its environment. It’s not anything personal, but there are many ways to improve the situation.

Read on to find out exactly why your chameleon may be acting out. From environmental factors to animal instincts, there are a few explanations. You’ll also learn some helpful steps towards taming an aggressive chameleon.

What Could Be Making My Chameleon Act Out?

If you feel that your pet chameleon hates you, it’s probably been engaging in behaviors like puffing up, hissing, mouth gaping, headbutting, and maybe even biting! Or maybe your chameleon runs the opposite way anytime you come near it. Either way, it’s worth doing some investigation to figure out exactly why your pet is reacting to you in this way.

Remember that lizards are simply not the same as cats or dogs; they don’t understand the concept of affection, but they may grow to tolerate you. Chameleons simply don’t have the capacity for love that other types of pets do. They’re lots of fun to observe, but if you’re looking for an interactive pet, a chameleon isn’t the best choice for you.

Below we’ve detailed three different reasons that your chameleon may be acting as if it hates you, as well as some suggestions to remedy the situation. 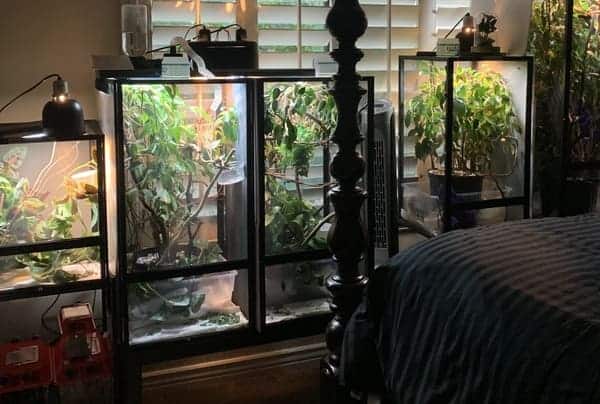 Remember that while it may seem like your chameleon hates you, it may be responding to other aspects of its environment rather than directly acting out towards you. Aggression and stress go hand in hand, so if your chameleon has been aggressive toward you lately, one possible reason why is because its environment isn’t meeting its needs and is therefore causing stress.

Here’s a quick overview of how everything should be laid out in your chameleon’s enclosure to relieve stress and aggression.

Once you’ve ensured that all of these environmental needs are being met, give your pet a few days and see if the aggressive behavior calms down. If it does, great–you’ve figured out the issue. If not, read on to figure out what else might be going on in your chameleon’s brain when it lashes out at you.

In the wild, if a larger animal swooped down from above, that would be a pretty good indication to a chameleon that it’s about to be either eaten or crushed to death.

So if you reach your hand into your pet’s enclosure from above, even if you have the best of intentions, it makes sense that your chameleon might respond with aggressive behavior in an attempt to defend itself against what it thinks is a predator. Try to look at the world through your chameleon’s eyes and approach it accordingly. Avoid making sudden movements or loud noises as well.

Just because your pet chameleon was bred in captivity doesn’t mean it’s lost all of its animal instincts. Chameleons have passed down instinctual knowledge through their DNA over hundreds of thousands of generations in nature. A few generations in captivity can’t quite override that!

Chameleons are solitary creatures that like keeping to themselves, and it goes against their instincts to constantly be handled and forced to interact with humans. Follow your pet’s lead rather than forcing it to follow yours.

How Can I Tame My Angry Chameleon?

If you’re desperate to find a way to stop your chameleon from hating you, we’ve got you covered! Follow the steps outlined below and you’ll be well on your way to forming a better relationship with your pet.

Give Them Time and Space

This step begins the second you adopt a chameleon. You’ll initially want to give them plenty of alone time to grow comfortable with their new environment before trying to handle them.

Chameleons are shy creatures, and they are very sensitive to any changes in their environment. Therefore, moving them to an entirely new location and enclosure is bound to cause them some stress.

It’s expected for a new pet chameleon to avoid eating for a few days as it settles into its new home. Ideally, you should wait for a week or two before trying to handle your pet. After the initial handling, give your chameleon some space and time to itself whenever it acts up. Forcing handling time will only end badly for both you and your chameleon.

Hand-feeding is a wonderful tool that can help you to forge a bond with your chameleon. If you can get your chameleon to associate you with food rather than danger, that’s a great first step to ending any hateful behavior your pet has been engaging in.

You can actually try hand-feeding before handling. After adopting your chameleon, you only need to give it a few days before attempting to hand-feed. Keep in mind that although it’s called hand-feeding, you don’t need to actually hold the prey in your hand–and you might not want to, especially with large insects.

You can use tweezers or tongs to offer the prey to your chameleon.

Don’t expect your pet to run up to you immediately, especially at first. Patience is key! Wait calmly until your chameleon approaches and shoots its tongue out to eat the prey. One great tip is to try hand-feeding first thing in the morning. This is the time when your chameleon will be the hungriest and therefore more willing to eat out of your hand.

Once hand-feeding has become the norm, your chameleon’s brain will be conditioned to associate your hands with positive things rather than with fear and stress.

Give Them the Option

Wait patiently and see if your chameleon comes out to explore! If coming out of its enclosure is done on its own terms, your chameleon is much less likely to display any aggressive behavior.

You’ll want to stay in the room while your pet explores, both to supervise its activity and to help it get used to your presence. After repeating this exercise several times, you can try offering your hand as a bridge rather than a branch and see how your chameleon responds. Over time, your pet should develop a higher level of comfort around you.

If it seems like your chameleon hates you, it probably doesn’t–it’s much more likely that it’s just acting out of instinct or stress. Make sure that there are no environmental stressors, and don’t force handling time if it’s clear that it makes your chameleon uncomfortable.

In order to tame an aggressive chameleon, you’ll want to first give your pet all the time and space it needs, and then begin trying to hand-feed it. As far as handling time goes, allow your chameleon to call the shots by leaving their enclosure door open and waiting for them to come out and explore.

While your chameleon isn’t the type of animal to cuddle with you, you can definitely develop a happy coexistence by following the guidelines given in this article!