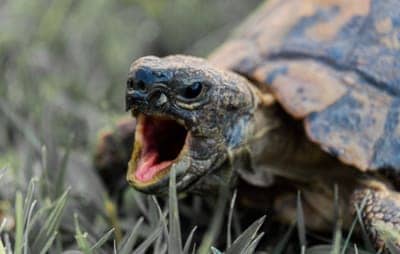 If your tortoise has always been mild-mannered and friendly, it can be quite a shock to see it run at you and snap at your feet! You might be wondering if you’ve done something to bring on this behavior, or if your tortoise is going through some kind of stress that’s caused it to act out.

So why does my tortoise bite my feet? Oftentimes, tortoises will bite as a result of hormone changes, hunger, a need to claim territory, or to protect themselves.

Read on to find out exactly why tortoises bite feet and what you can do to cope with this aggressive behavior. You can also learn more about aggression in tortoises in general, how it is displayed, and its causes and possible solutions.

Why Do Tortoises Bite Feet?

While this behavior may seem odd, it’s actually extremely common, especially in male tortoises! It can be a result of hormones during mating season, hunger, or a way to claim territory or protect itself against a perceived threat. Your pet may also bite you because it mistakes you for food! Find a brief explanation of these reasons below.

Many tortoise owners report that this is a behavior that doesn’t completely go away, so it’s important to find ways to cope with it. Although the behavior can be improved by making changes to your tortoise’s environment and stimulating it mentally with toys and trips outdoors, the best way to cope with the behavior is to wear socks or shoes.

The shoes will protect against any pain from the bite, and lots of tortoise owners have explained that wearing socks is a huge deterrent for their pets that prevents them from biting entirely. 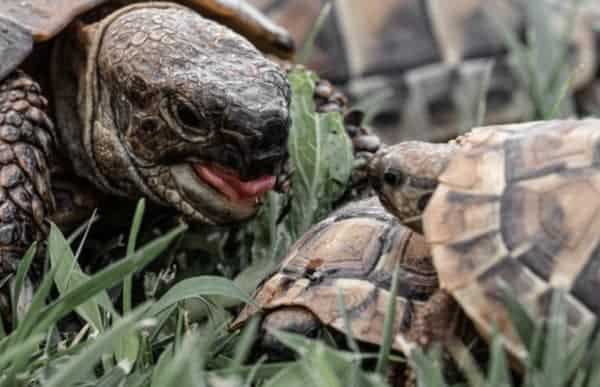 Do Tortoises Bite Each Other?

The short answer is yes. There are three general situations in which tortoises bite each other. Fights, a need to show dominance, and the mating process can all be reason enough for a tortoise to bite.

When tortoises get into disagreements of any kind, one of the most common ways to communicate their anger with the other tortoise is to bite it. Typically this is done in self-defense. In very extreme situations, tortoises have been known to literally take a bite out of each other.

In the event of starvation, they can resort to cannibalism if there is no other food source available. However, this kind of behavior is basically nonexistent in pet tortoises, as long as they’re not being neglected.

A Display of Dominance

The most common situation in which a tortoise will bite to show dominance is when a new tortoise is introduced into its environment. Your tortoise will feel it is necessary to tell the other animal that they were there first, and this is their space.

This usually happens in the case of two males being housed together, but it can also occur between a male and female tortoise.

Tortoises and the Mating Process

This type of bite typically doesn’t cause too much damage, although you should separate the tortoises after they mate if biting takes place.

In general, tortoises are very approachable and friendly, which is part of the reason they’re so popular as pets. They’re typically not aggressive creatures, and don’t often engage in conflict with other tortoises, animals, or humans. However, there are a few things that can lead to aggression in tortoises.

Tortoises usually communicate through body language. Look out for these telltale signs:

Your tortoise may bang its head on anything and everything in its enclosure, or it could even bang its head against you if you’ve done something to make it feel stressed. Head banging indicates that your tortoise is feeling territorial; it’s a way to assert dominance.

This is a pretty clear sign of aggression. Especially in cases when two tortoises are fighting, you’ll probably see a lot of snapping and biting. If your tortoise is biting you, that’s most likely a signal that your pet feels threatened or frustrated. 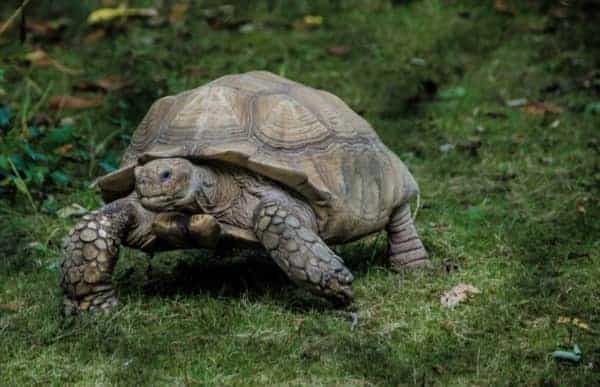 This indicator of aggression is usually seen in gravid female tortoises (tortoises that are preparing to lay eggs). This is because they are extremely territorial during this period as they search for a good spot to lay their eggs.

In other circumstances, ramming could mean that your tortoise feels like it is in competition for food. This can lead your pet to ram into you during feeding or handling time.

While chasing isn’t always a sign of aggression, it can be. Typically, chasing is actually a positive behavior that indicates that your pet is happy to see you or is eager to be fed. However, a territorial tortoise can engage in chasing behavior if it wants to get people or animals out of its personal space.

How to Handle Aggression in Tortoises

Unfortunately, you can’t train a tortoise the way you would train a dog that’s been behaving aggressively. What you can do is try to get to the root of the aggression and tweak your tortoise’s environment as needed to lessen the unwanted behavior. Here are a few helpful tips.

A tortoise that is constantly snapping at your feet can definitely be a bit of an annoyance! But with patience and willingness to cope with the behavior, you should be able to get through it. Tortoises typically bite feet because of hormones, hunger, a need to claim territory, or as a means of protection.

Wearing socks is a simple and effective way to deter your pet from biting your feet!

Tortoises do bite each other in certain situations such as mating, fighting, and claiming territory. You can see aggression displayed in tortoises through their body language. Behaviors such as head banging, snapping and biting, ramming, and chasing are all signs of aggression.

There are many ways to lessen aggressive behavior, such as allowing time outdoors and providing toys and other ways to keep your pet occupied. It’s also very important to keep your tortoise’s enclosure clean and full of substrate that’s good to burrow and roam in.