There have been a number of creatures that have roamed this planet, each with their own unique characteristics. Many, of which, are still foreign to a majority of us. However, nothing can seem more strange than that moment when your harmless little turtle suddenly puffs its neck out at you; fear not! There are actually a number of reasons for this specific behavior – some may give you relief and some may just surprise you!

So why does my turtle puff his neck? While it may seem unusual, puffing of the neck usually occurs naturally while sniffing their surroundings or while simply breathing.

Albeit common, in this article, we will take an in-depth look as to why turtles tend to puff their necks out and how you can differentiate it from an actual medical issue. In addition to this, you will learn about certain symptoms and treatments, ultimately turning you into the expert that your turtle can rely on!

The main reason as to why your turtle is puffing his neck is because he is simply breathing! Turtles are confined to a relatively tight shell, giving them only so much space to work with and maneuver around.

By puffing their necks, they make the process of inhaling air far more efficient and just easier on their bodies overall. Now, what you may also notice is that this occurs when he has both been submerged underwater, and when he starts to emerge from the water.

In the case of him being in the water, it is also possible that he may be holding his breath; turtles actually have the ability to do so for up to seven hours (good luck beating him in a contest)!

In addition to this, there is also a common misconception on how turtles breathe. They cannot breathe underwater. Rather, hold their breath (as mentioned before). Turtles are reptiles, not amphibians.

However, being that turtles have been around for more than 250 million years (yes, you read that correctly) they have been able to adapt and gain the ability to extract oxygen through water molecules (H2O) allowing them to spend even the harshest of winters underwater! 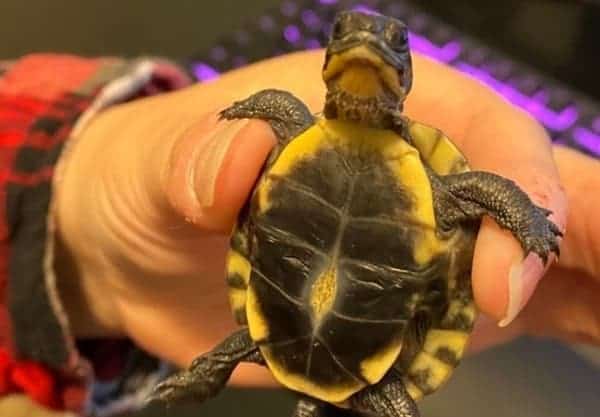 Respiratory infections are unfortunately common with turtles as well. However, a side effect of this is also a puffy neck. The main way to tell the difference between whether or not this needs to be treated is based solely off of your turtle’s behavior. For example, if your turtle appears to be floating on water, then that may be a sign to reach out and seek help.

Infections stemming from the respiratory system are usually caused due to a number of different reasons. The main two (in this case) are due to a deficiency in Vitamin A (essential for proper immune and respiratory health) and bacterial infections (often caused through bacteria that has been on the shell, deep within it, and/or within his mouth).

Symptoms include, but are not limited to:

In this instance, veterinarians would make an attempt to force-feed them so that they are given the proper nutrition. This, of course, will directly boost their immune system’s health and get them back up to speed (if you deem one mile per hour to be fast, that is).

Your turtle’s diet may consist of snails, grass, mushrooms, flowers, vegetables, and even berries. The foods that you absolutely want to avoid feeding him are those that are high in sugar, sodium, and dairy (they actually have not one of the proper enzymes to break down dairy products). This can all be harmful to their digestive system.

As mentioned with respiratory infections, pneumonia is another reason as to why your turtle has a puffy neck. Unfortunately, if left untreated, this infection can become deadly.

Turtles that have been diagnosed with pneumonia have been said to carry these following behaviors: 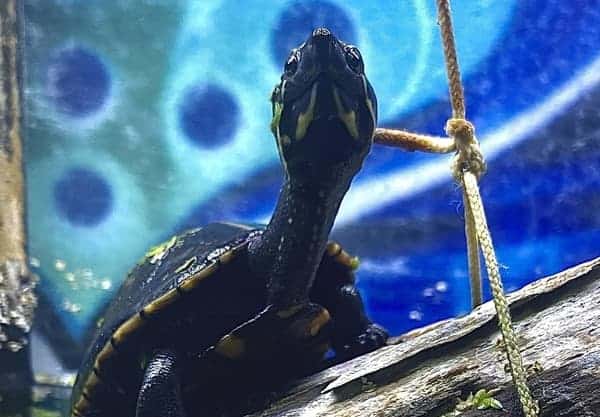 The best way to treat pneumonia itself would be to bring your turtle to the vet. This is, again, a very serious infection and is not something that individuals usually tackle on their own.

In following-up with your appointment, the best over-the-counter medication for turtles in this instance itself would be API’s Turtle Fix Antibacterial Treatment. This has worked wonders for turtles and yours will definitely thank you for it as well. It is a topical cream and not only treats the current bacteria, but also prevents its growth.

Another way that your turtle may get treatment is actually through surgery (especially with abscesses). An abscess is a pus-filled pocket that (in a turtles’ case) starts at the mouth and gradually begins to make its way into the ear canal.

This can not only be painful for him, but it can actually lead to more severe infections later on if left untreated. The surgery would start at the ear as that is the last and worst place the abscess can end at.

Knowing that your turtle’s puffy neck can mean a number of things, it is important to take precautionary measures to ensure that it is merely just due to your turtle’s normal breathing habits! Trusted veterinarians have stated several ways in which you can do this.

Supplements are crucial in helping your turtle lead a healthy and clean life. It is recommended that you provide your turtle with vitamins, minerals, and calcium. Not only do these help to keep him healthy, but they also help his skin and shell in terms of color and composition.

The cleaner the shell, the happier the turtle! Cleaning his shell is a wonderful way to avoid any type of infection(s) and/or disease. In doing this, you can also prevent the shell from rotting (this would result in the exposure of both nerves and bones).

As a matter of fact, one of the best mixtures for a turtle’s shell can be found at your local supermarket and/or drugstore! All you need are the following:

What you would need to do is mix the apple cider vinegar with some warm water (the ratio of water to cider should be higher). Once the mixture has been made, put him in a tub and grab a brush (nothing rough).

Gently start to scrub his shell on the exterior and pay extra detail to the interior as this is where the bacteria can easily gain access to. Once finished, it is highly recommended that you let his shell dry thoroughly. 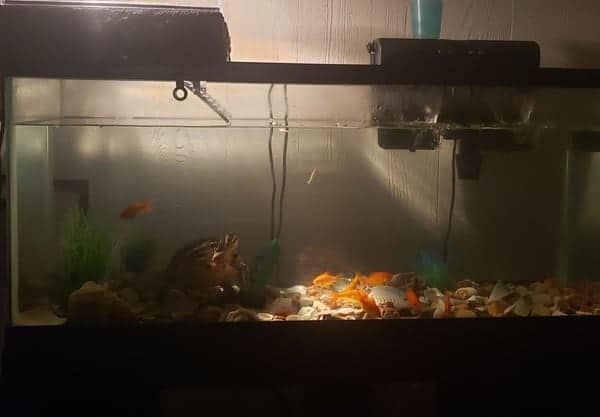 It is also crucial that you clean your turtle’s tank. It is recommended that you do this anywhere between once or twice a month (properly drying it in between). A clean tank will also help in preventing any infection (such as salmonella) and/or disease (it will also smell great and will be far more comfy)!

Moreover, you will save yourself a lot of stress in knowing that any harmful bacteria will be eliminated by cleaning and maintaining the water provided for your turtle to inhabit within the tank. It should be noted that turtles thrive in water that contains little to no chlorine.

If you recall the last time you went for a swim, you may recount that your eyes became highly irritated even after the smallest amount of time in the pool. Similarly, turtles can become sensitive to the chemical and will ultimately result in an uncomfortable environment (mind you that with the proper water conditions, bacteria that may be beneficial to the turtle will start to grow).

DISCLAIMER: DO NOT use any cleaning products (i.e. Windex, glass cleaner, etc.) unless you are absolutely certain that the turtle will not be affected and is placed in an area far from the chemicals. These chemicals are not only harmful for him, but they can also be fatal.

Now you know what causes your turtle to puff his neck! Oftentimes, it will simply occur because he is breathing. However, as with the information above, it is crucial to understand that sometimes, it may actually be a cry for help. If you are still curious, please feel free to contact your local veterinarian for more information as even the slightest delay in action can be harmful to your turtle – he will thank you later.