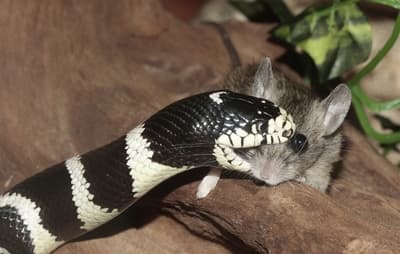 Wild animals, including snakes, rarely eat consistently. They’re opportunistic hunters, conserving their energy and hiding from predators until the right prey crosses their path. Even still, you may wonder why your captive snake takes so long to eat the food you put right in front of him. After all, the last time they had a square meal was weeks ago.

Why does my snake take so long to eat? Your snake is taking a long time to eat because they do not feel secure, you are feeding them improperly, their habitat is making them lose their appetite, or because they are simply not hungry.

Read on to find out which of these may be true for your snake, how you can help your pet find their appetite again, and to learn about the natural feeding habits of your reptile. 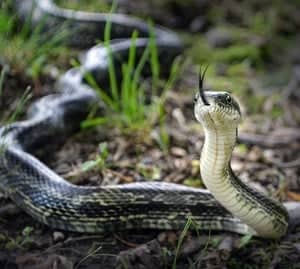 In the wild, snakes eat infrequent, but substantial meals. Wild snakes may go for several weeks without a square meal. The amount of food your pet snake requires, as well as the frequency with which they are fed, will vary depending on their age, size, and species. Be sure to do your research and ask your veterinarian about the feeding requirements for your individual snake.

Snakes will display subtle signs that they are hungry. For example, your snake may become more active or will start exploring and climbing the sides of their enclosure, looking for food. Snakes may also have a renewed appetite after a bowel movement. Learning to recognize these behaviors and feeding your snake accordingly can help you find the right feeding schedule.

Snakes are also slow to digest their prey, taking about 4-5 days to fully digest a meal. Since snakes swallow their prey whole, their bodies have to work extra hard to break down the bones of the animal they’ve just consumed.

The larger and longer your snake is, the longer it will take them to digest their prey. The temperature of their habitat can also affect the speed of their digestion. A snake will not eat again while it’s still digesting its last meal.

Additionally, snakes have slow metabolisms (because they are mostly inactive, they don’t need much energy) and they can slow their metabolic rates by up to 70%1. This allows them to survive for longer periods without food, which is a tremendous benefit to a wild snake when food is scarce. Even your captive snake can easily survive for a couple weeks on one good-sized rodent.

So, the simple answer might just be, your snake is taking so long to eat his next meal because they just aren’t hungry for it yet.

Giving your captive snake live prey is generally discouraged. A stressed-out rodent who is well aware that they are about to become a snake snack will not go quietly. They may bite and scratch your snake, which can end up causing serious injury to your reptile.

If you have previously been feeding your snake frozen rodents and you make the switch to live prey, this may cause your snake not to eat. If you do offer live prey to your snake, and they do not consume it in a timely manner, you need to remove the prey from your snake’s enclosure to ensure the prey doesn’t end up wounding your snake.

If you’ve always fed your snake live prey and it takes your snake awhile to eat their meal, you’ll want to strongly consider making the switch to frozen rodents.

You can purchase a wide variety of frozen rodents online, at local, small pet stores, and from reliable local breeders. Avoid purchasing frozen feeders from larger chain stores as their rodents tend to be of lower quality and they have occasional salmonella outbreaks, which can affect your snake’s health.

Do your research about the proper size of your snake’s prey relative to their age and size. For example, ball pythons should be given frozen prey that is approximately 10-15% of their body weight.

You can prepare your snake’s frozen prey by thawing and warming it. First, remove the frozen rodent from the freezer on the night prior to feeding your snake and place it in the refrigerator. This will allow the prey to thaw slowly, which discourages bacterial growth.

Then, about half an hour before feeding your snake, place the prey in a BPA plastic bag and submerge it in very warm, almost hot water. This brings the temperature of the frozen rodent up to about 98 degrees, similar to the body temperature of live prey.

If you’ve tried a wide variety of frozen prey and your snake regularly refuses these meals, you can try providing live rodents as a last resort. Just keep a watchful eye on your snake during feeding time, and remove the rodent from your snake’s enclosure if your snake doesn’t eat them within 30 minutes. 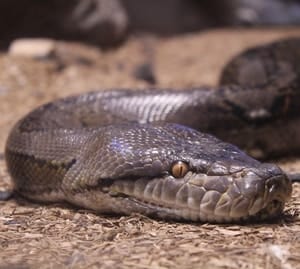 Your snake may also be refusing their meals because they are stressed, or the temperature in their tank isn’t quite right.

Snakes rely on warm environments to remain active and digest their food properly. If you allow the temperature in your snake’s habitat to dip too far below acceptable levels, your snake may become lethargic and lose their appetite.

The temperature on both the warm and cool end of your snake’s enclosure should be constantly monitored with reliable thermometers. Different species of snakes have slightly different temperature requirements, so again, be sure to do your research about the proper temperatures for your pet. As a general rule, if the temperature in any part of your snake’s tank drops below 70°F, it is too cold.

If your snake refuses to emerge from their hide (which they should have at least two of, one on the warm side, and one on the cool end of their enclosure), you may want to try placing their meal inside their hide. Do not attempt to push prey into the same hide that your snake is currently occupying, however, as this may frighten your snake and cause them to bite.

Many snakes are crepuscular, which means they feed primarily during dawn and dusk. You should attempt to mimic your captive snake’s natural behavior as much as possible by feeding them during these hours of the day and keeping the lights off.

If you want to make your snake feel even more secure, leave the room after you feed them (unless of course you’ve given your snake live prey and you need to supervise the encounter). It may be possible that your snake views your presence during mealtime as a threat, and this is affecting their appetite.

Tips for Feeding Your Snake

In addition to offering the right size and type of prey, and warming your snake’s prey for them if it was previously frozen, there are a few other things you can do to make their food more appealing to them.

First, if you have a snake who often seems unwilling to feed, try varying their diet. Most snakes have more than one food item that is acceptable. For example, a ball python can be offered mice, rats, chicks, Quail chicks, gerbils, and African soft-furred rats. If your snake is consistently refusing one type of frozen rodent, try another.

You can also use a pair of metal feeding tongs to mimic a live rodent’s movement. A pair of 12 or 15-inch tongs is appropriate for most captive snakes. Do your best to entice your snake to strike their prey by encouraging the predatory behavior that comes naturally to them.

You’ll have to experiment a bit and find the movement that works best to entice your snake.

If you have a snake that has gone weeks without eating and nothing else is working, you’ll need to make a phone call to your veterinarian. Snakes often do not show outward signs of illness, and you’ll want to be sure that your snake’s lack of appetite isn’t a symptom of something more serious.

Snakes will refuse to eat, or take their time eating for a variety of reasons including improper tank temperature, stress, and a distaste for the meals currently being offered. There are several things you can do to encourage a healthy appetite in your pet snake. If you suspect your snake isn’t feeling their best, however, schedule an appointment with your veterinarian as soon as possible.