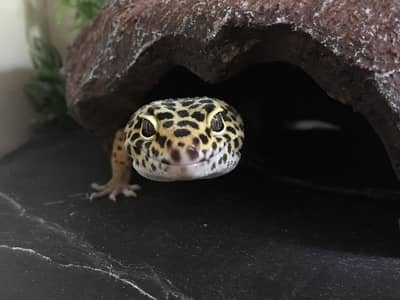 Despite all of the diseases and illnesses leopard geckos are prone to, they aren’t reptiles that are very hard to take care of.  But if one thing goes wrong with their tank, they don’t get enough calcium or even eat enough food and water, then this can throw their health all the way off and will have you stuck wondering what exactly went wrong and how you can fix it.

Why is my leopard gecko not moving? There are many different reasons why your leopard gecko is not moving, but one that is more common is when your gecko’s tank isn’t set to the right temperature.  Each side of the tank serves a different purpose and are both crucial to their health.

It’s not that leopard geckos are picky with what conditions they’re living in, it’s just that their bodies require certain needs such as proper nourishment, vitamin intake, and safe, harmless equipment around them in their tank in order to be healthy and comfortable in their environment.  Fortunately, I have not had this issue with any of my geckos, but I decided to look it up and see what I could find because I know a lot of others who have or do go through this and wanted to see what I could do to help. 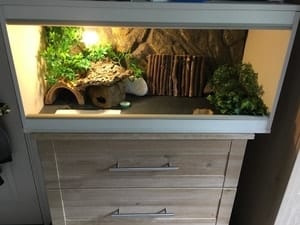 Leopard geckos that live in the wild live in perfect balance by hiding in shaded areas away from the harsh rays of the sun and then come out when they need to get their D3, but if they’re not getting this same balance in their tanks, then it can cause them to act strangely until it’s been corrected.

Because they need this balance, it’s very important that when setting the temperature, you create a cool and hot side for your gecko not only for their comfort but for their digestion needs and health as well.  Here are the temperatures that they will need in their terrarium according to which time of day it is:

Temperatures that are off can cause a great amount of stress, sudden changes in behavior, and even death if too extreme.  If you find that your gecko isn’t moving or eating, then your tank is either too cold for them to properly digest their food in, or too hot to the point where they are constantly hiding in order to get away from the harsh and uncomfortable heat.

Unfortunately, when buying heating pads, heat lamps, and UVB lights, it’s not as simple as just setting it up and then forgetting about it.  You have to check your temperatures frequently to make sure that your gecko has the balance that it needs in order to survive in its tank or else it will start to suffer and display unusual behavior.

I know how much of a hassle it can be to constantly be checking temperatures to make sure they’re safe.  I made the mistake of doing this manually when I first started out with my leopard gecko.  If you want to put this part of your gecko’s care more on autopilot, consider getting a thermostat.

It’s the one I personally use and would recommend to anyone. It helps make sure the temperature in your terrarium stays at whatever you set it to.  By the way, if you’d like to check out a more in-depth article on your tank’s temperature, then click here.  I go into a lot more detail.

Sometimes when your leopard gecko gets too hot, it can be a little hard to cool down enough to want to leave the hide again. So if you’ve made a mistake with your temperature levels and you want to speed the cooling process up, then get a spritz bottle and mist him one time with a light squirt.

Misting is great not only when the temperature in your tank is too high, but also on very hot days as well.  The temperature might go up a lot more naturally on days with higher bouts of heat so giving your leopard gecko a spray every now and then will be good for keeping it cool until the temperature drops and the hot side of your tank isn’t too hot for your gecko to relax in.

Keep in mind to not point the nozzle too close when you spray so that you don’t irritate him/her.

If you want to know more about this condition, please check out my article here for a more in-depth look at what this particular disease is capable of and how you can treat it. 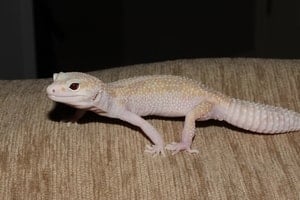 If you’re not using a substrate that is safe for your leopard gecko, then more than likely it will eat it and become very sick due to impaction.  Impaction is when your leopard gecko eats something that it can’t digest and is a life-threating issue when it happens.

If you want to avoid impaction, then it’s best to pick a substrate that they won’t die from if they do happen to eat it, which a lot of leopard geckos end up doing no matter what the substrate is, unfortunately.

When shedding occurs, leopard geckos become very, very distant by constantly hanging out in their hides and don’t like to be bothered much until the process is over.  If you have a baby gecko, then you can expect for this to happen very often, but as your gecko gets older, you’ll find that the shedding becomes less and less and at that point, you’ll be used to your gecko’s behavior and shouldn’t be as worried as you were when they first started to do it.

As a new reptile owner, this can be a very scary time and can cause you and your gecko a large amount of stress until it’s over, but luckily, the process is usually harmless and is a very natural part of a leopard geckos life and should be nothing to worry about when it occurs.  If you want a more in-depth article on this topic as well, click here to check it out.

This might seem like a really silly reason as to why your leopard gecko is not moving because obviously nobody moves when they’re asleep, but surprisingly, this is a huge cause of concern for a lot of leopard gecko owners who haven’t had their pet very long.

Because leopard geckos are nocturnal, this means that they like to sleep during the day and then come out to play at night.  This sleeping schedule can be very worrisome because when you’re up, you never see them moving. But to ease your mind, it’s completely normal and it’s simply how they are hardwired to live.

Leopard geckos along with other nocturnal animals are nocturnal because this helps them escape the harsh and hot rays of the sun (which makes sense for leopard geckos because high temperatures in a tank can be very damaging to them).  Because of their nocturnal nature, they are naturally accustomed to living in dark conditions and have senses that help them survive and prey on other living creatures who aren’t nocturnal.

If you catch your leopard gecko sleeping the day away while your up, then that just means that they’re on a different schedule than you and will get up at night to eat and move around.  But if you’re a night owl like me, then you and your gecko will be able to bond together a lot more frequently. 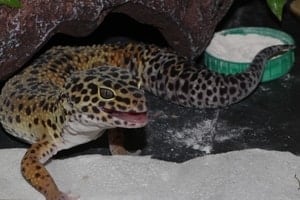 Believe it or not, not moving can be a huge sign of too much stress on your gecko, and aside from an extremely hot or cold tank, there are many other factors that can stress your gecko out causing it to shy away and not want to interact with anyone or anything until it’s feeling better.

A big stressor for leopard geckos are threats.  If they feel threatened by something such as a large animal or a human handling it that it doesn’t recognize, then your leopard gecko will likely freak out.

To cut this stress out, avoid letting bigger animals such as dogs and cats be around your gecko because not only will this cause turmoil, but is also a very big safety concern as well.  Cats and dogs instinctively attack anything they see as prey or as a threat and will go after your gecko if they are not calm or trained to be around smaller animals.

There are a ton of different reasons as to why your leopard gecko isn’t moving, but if this happens to you, immediately check your tank’s temperature.  If they’re off, then this is likely the culprit.  If not, then look for what could be stressing your gecko out.

Running away and hiding is a defense mechanism that all living creatures seem to have, including humans.  So if you find that your gecko is stressed out, really think hard about what it could possibly be.

Could it be because of a shed coming on, a sickness, a lack of calcium?  There are multiple causes that you can look out for.

If everything is alright with your tank and you don’t feel that there’s anything stressing your gecko out and you still can’t seem to figure out why your leopard gecko isn’t moving, then consult with a veterinarian immediately for better advice on how you can get your leopard gecko up and moving again.