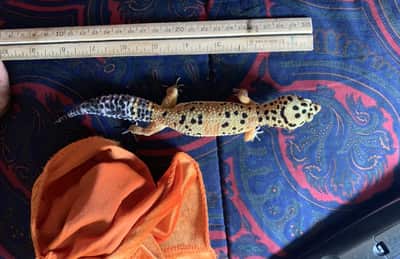 As most of you know, leopard geckos are lizards that are generally very small by nature.  Because growth is expected when it comes to these guys though, it can be a little worrying when it doesn’t happen.  There are a few reasons why your leopard gecko might be staying so small, but hopefully, after reading this article, you’ll have some clarity as to why.  Let’s get into it.

Why is my leopard gecko so small?  The main reasons your leopard gecko is so small is likely because they’re either deficient in nutrients, have a spinal deformity, or because they might have potentially hatched too early from their eggs during birth.

And while these are some of the most common reasons as to why your leopard gecko is so small, they’re definitely not the only ones.  If you’ve owned your gecko for a while and they’re not growing, then sadly, chances are that they have stunted growth and may never grow to the size that a ‘normal’ leopard gecko would.  For additional information though, please read on. 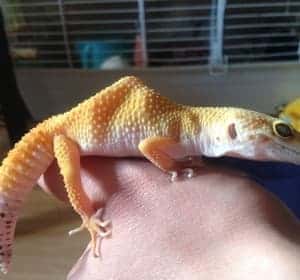 Some of the reasons listed above for why your leopard gecko is so small can be attributed to causes that could have completely been prevented, but when it comes to this reason, there’s nothing that anyone could have done to stop it.

Just like us, leopard geckos are prone to developing certain issues in life due to the genes of their parents.  It’s not always a guarantee that they’ll inherit these issues, but the chance that they will is very likely.

If your leopard gecko came from another gecko that may have not had the best genetics, then this could very well be the reason why your gecko is small and won’t grow.  Because there’s no way for you and me to tell if that is true or not though, the best thing you can do is look at other leopard geckos that were born from the same clutch and base your conclusion on that.

Not all leopard geckos from the same clutch are guaranteed to be negatively affected by their bad genes, but because the chance of it happening to other geckos that they were born with is likely high, looking at this as a possible reason for why your leopard gecko is the way that they are is probably a good thing to do in order to get some sort of indicator.

If one of your geckos didn’t breed the clutch themselves, I recommend reaching out to the breeder or reptile shop in which you got your gecko from and asking them what the other gecko looks like that was born with your gecko so that you can have actual evidence to base your conclusion off of.

As much as I hate to say it, malnourishment in leopard geckos is an issue that happens in the reptile community pretty frequently.  It usually occurs when an owner is either too irresponsible to take care of their gecko or because they don’t have the right information needed in order to properly give their leopard geckos what they need.

Malnourishment not only occurs when your leopard gecko isn’t getting the foods that are required to help them grow but also when they’re not getting the vitamins to grow either.  A leopard geckos diet is extremely important and if it’s poor, then, unfortunately, their bodies will suffer from it.

In order to avoid putting them through that, I recommend feeding them consistently.  How much food your leopard gecko eats will be based on their age and how much they personally like to eat.

When feeding them only highly-addictive insects such as wax worms and butter worms though, it can be very difficult for them to turn down food.  That said, if you feel that you’re not feeding your leopard gecko enough then you should probably start to so that they can gain weight and get to a normal size.

When it comes to the most common feeders such as mealworms and crickets, as mentioned above, it’s safe to just place the food into their tank and see how much they eat.  Once they’re done eating, remove any unwanted insects from the tank and then you’ll be good to go.

For more fatty feeders such as wax worms and butter worms, I recommend only giving these types of insects to your gecko once every two weeks and only 2-3 of them per feeding.  Any more than that can cause issues and they’ll be worse off than they were before they were given to them.  In addition to that, you’ll also want to make sure that your gecko is at least 6 months old.

If you’d like to know when exactly to feed your leopard gecko but you’re not sure, take a look at the list below:

Not only will you want to make sure they’re being fed right, but you’ll also want to provide them with the right amount of vitamins as well.  If you’d like to check out the vitamins that I use then click here and check it out over on Amazon. 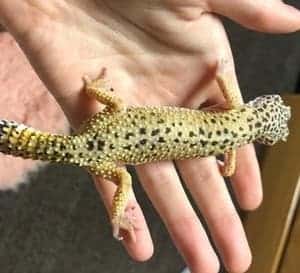 Because leopard geckos can be small for two different reasons, it’s important to know the difference between these reasons so that you can know whether your leopard gecko is actually healthy or not.

That said, I want you to know the difference between a skinny gecko and a gecko that’s just smaller in size.  If your leopard gecko has the body of an averaged sized leopard gecko but is really skinny, then there’s likely an issue going on with either their diet or from a potential parasitical infection such as crypto that’s causing them to be that way.

If you haven’t been feeding your gecko that much and they’re not gaining weight, then it’s likely because of their diet.  But if you are feeding them and they just refuse to eat and are dropping weight rapidly along with other symptoms, then there’s likely something a little more serious going on that you might not know about.

If you’re experiencing the second potential reason that I mentioned, then I recommend calling into your nearest herp veterinarian and scheduling an appointment immediately.  Hopefully, crypto isn’t what your leopard gecko is going through.  But just to be on the safe side, it won’t hurt to have them seen to make sure.

In addition to that, if you’re noticing that your leopard gecko is smaller in size but they still look plump and they eat well, then chances are that what they’re experiencing is stunted growth.

Stunted growth is something that happens when the proper care isn’t taken in the early stages of their life or if bad genes or malnourishment was passed down from the mother.  No matter what the cause is though, leopard geckos with stunted growth are still healthy lizards.

Unless your leopard gecko is extremely skinny, not eating, or showing other alarming signs and symptoms, I don’t think there’s anything to worry about.  Again though, for peace of mind, you can always have a herp vet examine them and pinpoint exactly why your leopard gecko seems to be so much smaller than other geckos that you’ve seen for further clarity.

Because there are so many different reasons as to why a leopard gecko would be small, contacting a herp vet is probably the very best thing that you could do.  I’ve covered most of the reasons that I’ve heard of and seen, but because it’s hard to tell without looking at your gecko, it’s hard to know exactly what’s causing them to be that way.

Leopard geckos can end up being very small for many different reasons, but because it’s always difficult to find out the exact reason over the internet or without taking your gecko to be seen by a professional, finding that reason can be a little challenging.

Some leopard geckos are just small because they were neglected at some point after birth, but some are also small because something is going on with them internally.  Because those are only two of the potential reasons though, there’s no way to know for sure unless you get them checked out.

That, unfortunately, may not be the answer that everyone wants to hear, because most people in the reptile community aren’t professionals though, having someone take a look at them is probably the very best thing you can do.

As mentioned above, if your leopard gecko looks very healthy and acts very healthy, then chances are that they are in fact very healthy.  If they’re showing weird behaviors though and you’re having other issues with them, then it’s safe to say that they’re probably not.

Until you have them checked out though or have a ton of experience with leopard geckos, you may not ever know until you take them in to be seen.